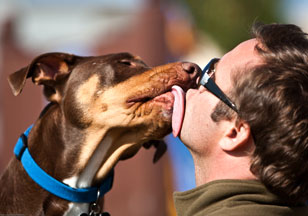 Today I found out dog mouths are not cleaner than human mouths.

If this were the case, I’m pretty sure a dog’s mouth would be some sort of medical miracle, considering: they rarely if ever have their teeth brushed or mouths cleaned; they literally put their mouth on everything; and they use their tongue as toilet paper for not only themselves, but also any other dogs they encounter. Mouths are a great environment for bacteria to thrive; so barring some innate very strong anti-bacterial agent in their saliva, this myth just wasn’t going to be true. There are also numerous types of diseases associated with dog bites, including pasteurella, tetanus, rabies, klebsiella, proteus, E. coli, eikenella, etc, which point to the fact that a dog’s mouth couldn’t be sterile, as people often claim.

This small study backs up the intuitive notion that if you are someone who goes around eating garbage, poop, and pretty much putting anything and everything you find in your mouth, all the while typically never having your mouth cleaned in any way, then your mouth is going to have quite a lot more types of bacteria in it than someone who brushes their teeth regularly and doesn’t go around eating poop and other such microbial gold mines.

So where did this myth come from? It’s likely that it started from people observing that dogs clean their wounds with their mouths and it is scientifically proven to have less chance of getting infected than if they didn’t lick it. The problem with this is that any wound that is cleaned regularly, by licking or simply running water over it frequently, will give you much less chance of infection than otherwise. There is no strong anti-bacterial agent working here, it is simply a case of cleaning off dead tissue and the like.

Another theory of this myth’s origin is the medical myth that if you are bitten by a human, you’ll have a much greater chance of having that bite become infected than if you are bitten by a dog. This “fact” has been spread around in antiquated medical journals for ages, but has recently been shown to be incorrect. As stated in the 1988 Annals of Emergency Medicine:

Recent study of human bites has shown that the early literature depicting all human bites as having an extraordinarily high infection and complication rate was biased by its emphasis on human bites of the hand that presented late with infection already present. These bites, the so-called closed-fist injuries (CFI), do indeed have a poor prognosis, but it may be as much due to their location and initial neglect as to the source of the injury. Human bites elsewhere do not seem to have any higher risk than animal bites, which have an infection rate of about 10%.

A more recent 1995 study done by the Journal of the American Academy of Dermatology, observed the same thing:

Human bite wounds have long had a bad reputation for severe infection and frequent complication. However, recent data demonstrate that human bites occurring anywhere other than the hand present no more of a risk for infection than any other type of mammalian bite.
Expand for References