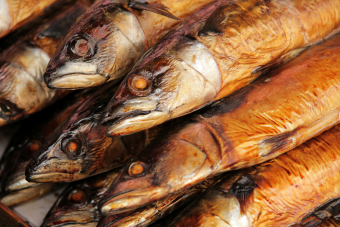 Meaning a distraction or false trail, the expression “red herring” has been relatively commonly used for the last two centuries, and its origins do, in fact, begin with a rust-colored fish. However, until quite recently, the accepted origins of red herring were themselves a false trail.

The literal sense of a red herring dates to at least 1250 AD when Walter of Bibbesworth wrote in The Treatise, “He etep no ffyssh But Heryng red.” A product of the process used to preserve the fish into a kipper, the herring is cured in salt brine and then smoked for up to 10 days. If enough brine is used, the fish turns a red, coppery color with a rather strong smell. Capable of being stored for long periods of time, this dried kipper was inedible until after it was first soaked in water to remove the salt, and then it could be warmed and eaten.

A staple in English society, particularly among the poor, there would have been a fair amount of tough, dried red herring hanging about. And, given that they had a strong smell, it makes sense that their aroma would attract animals. Accordingly, in 1697, Nicholas Cox described just such a use in The Gentleman’s Recreation, where a red herring was supposedly dragged along a route to get a young puppy to learn to follow a trail.

Others expounded upon Cox’s idea and said that later in the training, while following a fox or badger, a red herring would be dragged perpendicular across the animal’s path to confuse the dog at first, but ultimately lead to a dog that could stick to an original scent as opposed to a compelling, intervening scent. This explanation was, for many years, accepted as the origin of using red herring to mean a false trail.

But, as previously noted, this explanation is actually a red herring as Cox’s initial description was based on mistranslation of a book on horse training by Gerland Langbaine (also published in 1697). In the book, Langbaine recommended using a dead cat or fox for dogs to track and horses to in turn be trained to follow, with the red herring used to draw the dogs if cat or fox was not available. In this case, there was no deception happening, as would later be stated to support the notion that this is where the expression came from, and it wasn’t the dogs being trained, as Cox would himself state.

This red herring was only revealed recently, in a pair of articles published in Comments on Etymology in 2008, along with what is now accepted as the actual origin of our use of the phrase red herring.

In the early part of the 19th century, journalist and rabble-rouser William Cobbett used his publication Weekly Political Register to decry the English political establishment. In one story written on February 14, 1807, while illustrating the gullibility of his fellow members of the press, Cobbett described the following use of a red herring, ostensibly from his childhood, though thought to be a fictional account:

When I was a boy, we used, in order to draw oft’ the harriers from the trail of a hare that we had set down as our own private property, get to her haunt early in the morning, and drag a red-herring, tied to a string, four or five miles over hedges and ditches, across fields and through coppices, till we got to a point, whence we were pretty sure the hunters would not return to the spot where they had thrown off; and, though I would, by no means, be understood, as comparing the editors and proprietors of the London daily press to animals half so sagacious and so faithful as hounds, I cannot help thinking, that, in the case to which we are referring, they must have been misled, at first, by some political deceiver.

However, while Cobbett seems to have popularized the figurative sense of a red herring being a false trail, and this indeed is the accepted origin according to the Oxford English Dictionary, he does not actually appear to be the originator of the idea. There is one known earlier reference to this figurative sense, which at least my edition of the OED seems to ignore. This was spoken during a Parliamentary session on March 20, 1782, later published in the 1786 Beauties of the British Senate,

Though I have not the honour of being one of those sagacious country gentlemen, who have so long vociferated for the American war, who have so long run on the red-herring scent of American taxation before they found out there was no game on foot; they who, like their prototype, Don Quixote, have mistaken the barber’s basin for a golden helmet…

Despite this early instance, the expression didn’t ultimately became part of common vernacular until after Cobbett reprinted an “extended repetition of it in 1833,” and then his son included it in the commentary of a later edition of William Cobbett’s Rural Rides in 1853.