May 3, 2016 Melissa
Simon K. asks: Why do we call it “red tape” when there are a lot of needless obstacles and paperwork in getting something done in business and government? 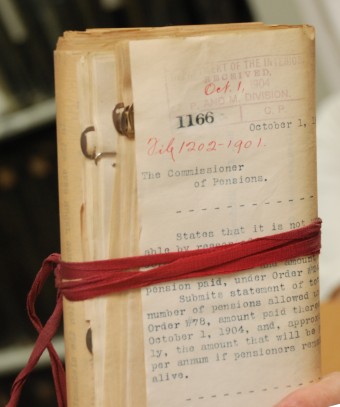 The practice of referring to “excessive bureaucratic rigmarole” as red tape dates back more than 400 years to the court of the Holy Roman Emperor and King of Spain, Charles V (1500-1558). As heir to three of Europe’s most powerful dynasties (Habsburg, Valois-Burgundy and Trastámara), at the height of his power, Charles’ empire stretched from Spain in the west to Hungary in the east, and from the Netherlands in the north to Sicily in the south. In addition, Charles had significant holdings in the New World, and an enormous administration to manage his vast empire.

At the time, administrative documents were bound in some fashion, either with rope, string, ribbon or cloth. Sometime during the early 16th century, in order to distinguish the most important documents that required immediate discussion at the highest levels of government (such as the Council of State), from those of less significance, Charles’ ministers began tying important papers together with red string or ribbon.

Seeing the efficacy of such a system, the method was soon adopted across Europe, and in fact, England’s Henry VIII used red string, ribbon or cloth to secure the petitions he sent to Pope Clement VII requesting annulment of his marriage to Catherine of Aragon in 1527.

Note that well before this time, tæppe had been an Old English word that meant “narrow strip of cloth used for typing, measuring, etc.” and its use dates back to at least the late 16th century. So, while it’s not clear that Henry’s court called it red tape, it is possible.

As for the term “red tape,“ reference to this string for important papers dates back to the late 17th century where it was written in Maryland Laws: “The Map . . . upon the Backside thereof sealed with his Excellency’s Seal at Arms on a Red Cross with Red Tape.”

The Oxford English Dictionary dates its current meaning to 1736 and John Hervey’s Poetical Epistle to the Queen: “Let Wilmington, with grave, contracted brow, Red tape and wisdom at the Council show.”

Another early instance of its metaphorical meaning is seen more clearly in Catherine Gore’s Stokeshill Place (1837): “My dear, you mistake John Barnsley. Dearly as he loves a bit of red tape, you never saw him try to inspire any other man with the love of business.”

Shortly thereafter, the term became widely used, including in Charles Dickens’ David Copperfield (1849-1850): “Britannia, that unfortunate female, is always before me, like a trussed fowl: skewered through and through with office-pens, and bound hand and foot with red tape.”