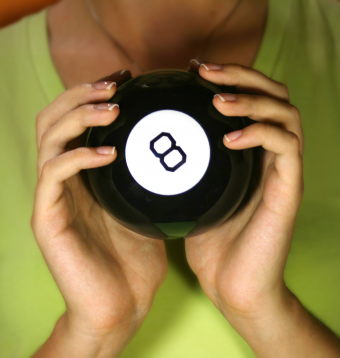 Can a plastic orb connect you to the spirit world and lift the future’s filmy veil? OUTLOOK NOT SO GOOD. Can it at least give good advice? REPLY HAZY, TRY AGAIN. Can a toy company make money selling it? SIGNS POINT TO YES!

A SEEKER BORN EVERY MINUTE

Wartime has long been a boom time for spiritualists, mostly because people long for any news about loved ones at the battlefront. In the 1940s, a woman named “Madame” Mary Carter was capitalizing on that opportunity, plying her trade as a professional clairvoyant in Cincinnati. Her best séance stunt was one she called the Psycho-Slate, consisting of a chalkboard inside a box, with a lid covering it. When a client asked a question, Carter would close the lid, and after a short interval of muffled chalkboard scratching, she would dramatically flip open the lid to reveal the spirit world’s answer, written with chalk in a ghostly scrawl. (How she did it remains a mystery.)

TELL A FORTUNE, MAKE A FORTUNE?

Mary Carter had a son named Albert who had little use for any spirits that couldn’t be drunk straight from a bottle. When sober, however, he fancied himself an inventor, and seeing the success of his mother’s Psycho-Slate, Albert Carter came up with his best idea ever: a portable fortune-telling device that any spiritual seeker could use at any time or place.

It took some time for Carter to work out the details. It had to look mysterious, it had to offer a variety of answers and, because he had no capital to work with, it had to be cheap to build. He went to work using what he knew best—murky liquids in cans and bottles—and developed what he called the Syco-Seer Miracle Home Fortune Teller—a seven-inch can-shaped device with a glass window on each end. The inside of the can was divided in two; each half contained a six-sided die floating in a dark, viscous liquid (according to some accounts, molasses from his mother’s kitchen) and each of the die’s six sides was inscribed with a short answer.

His reasoning for having two compartments isn’t clear, but perhaps it was for efficiency: You could get an answer from one end, then turn it over and get the next answer with little lag time. In 1944 Carter filed for a patent, made a prototype, and began showing it around Cincinnati’s toy and novelty shops.

YOU WILL MEET A HELPFUL STRANGER

One of the storekeepers, Max Levinson, not only wanted to stock Syco-Seers, he was very interested in helping Carter produce and market them. Levinson brought in his brother-in-law, Abe Bookman, an engineer from the Ohio Mechanical Institute, who suggested improvements to Carter’s design—adding ridges inside the chamber to make the die spin and better randomize the answers. He also hired a designer to give the Syco-Seer’s outer label a mystical appeal.

In 1946 the three men formed a partnership, which—in a nod to his two creative partners’ first names—Levinson called the Alabe Crafts Corporation. Bookman arranged for a manufacturer and planned for the retail release of the Syco-Seer in 1947. At just about the same time, Albert Carter’s alcoholism and self-neglect had finally caught up with him and he died. “When he was sober, he was a genius,” Bookman recalled to a Cincinnati Post reporter a few years later. “He stayed in flophouses and he was always broke. But I bought every idea he ever had, and that gave him enough to keep going.”

I SEE A PATENT IN YOUR FUTURE

Carter’s patent came through the following year, and luckily for Bookman and Levinson, he had signed rights over to the partnership before he died. Given new creative freedom to experiment with the design, Bookman began making changes that Carter had resisted.

First, while the Syco-Seer was attracting curious browsers in stores, it wasn’t generating sales, and Bookman was convinced that it was priced too high. To bring down the price, Bookman reduced costs by cutting Carter’s double-chambered design in half, using only one chamber, one die, and one window. He also decided that Carter’s mother was a good judge of product names. He borrowed her chalkboard gimmick’s name, calling his 3½-inch single-chambered device “Syco-Slate, the Pocket Fortune Teller.” Next, he decorated it with the 12 zodiac signs and an illustration of a gypsy fortune-teller. 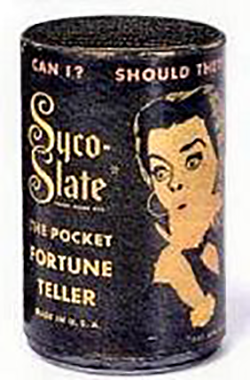 In stores, models dressed as gypsies demonstrated how to use the device. But demonstrations weren’t really needed. On the top of the cylinder were the instructions:

Place left hand on this end. Ask a “yes or no” question about the future, wait 10 seconds and turn SYCO-SLATE over. Answer will appear on “Spirit Slate” in the window.

Although the price of the new incarnation was lower, the Syco-Slate didn’t sell much better than the Syco-Seer had. Why? It looked like a can of peas. Bookman racked his brain—what did people expect when they had their fortunes read? Then it came to him: a crystal ball. Late in 1948, Bookman began encasing Syco-Slates in a translucent, iridescent ball. Then he changed the six-sided die to a 20-sided one, and even hired a University of Cincinnati psychology professor named Lucien Cohen to come up with answers for each of its 20 faces. Bookman was sure he had a winner this time.

He didn’t. The crystal ball flopped too. 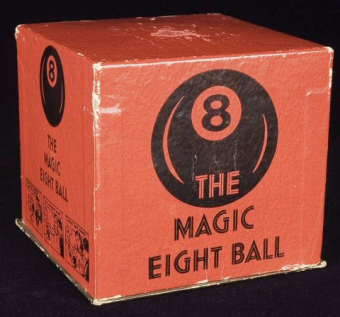 Bookman was out of ideas. He’d put a lot of money, time, and sweat into this thing. He was sure it was going to strike it big, yet nothing seemed to work. Then something strange happened, almost as if it had been preordained by the stars: Bookman got a message from beyond—just beyond Ohio’s western border. A representative of the Brunswick Billiards Company of Chicago called to say that Brunswick needed a unique promotional item—would it be possible to change the skin of Alabe’s crystal ball and make it look like a billiard ball?

It was a strange request, and it didn’t make sense. Who ever heard of an 8-ball that tells fortunes? But Bookman, looking for a way to make some money and reduce his surplus stock, agreed to do it.

Even Madame Mary Carter couldn’t have foreseen that a fortune-telling billiard ball would strike a chord with the public. Maybe it was because the absurd 8-ball design stripped away that phony gypsy fortune-teller aura, making the object clearly designed as a fun toy instead of an occult item. By 1950 most Americans were planted firmly in the material world. They might enjoy reading fortune cookies and newspaper horoscopes, but they weren’t trying to get genuine answers or relief from war anxieties. Most saw fortune-telling as something offbeat to laugh about with friends.

It turned out that a “Magic 8-Ball” fit right in. The Brunswick Billiards Company quickly distributed their supply, but people were contacting Alabe Crafts asking for more. Abe Bookman was smart enough to recognize that he had a good thing going. Albert Carter’s invention finally found its market.