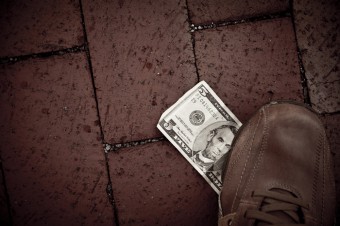 Turning a noun into a verb and then employing it in a way that seems completely out of context, the phrase “foot the bill” has long been used to mean paying the cost of something (that usually benefits more than one person).

The first written record of the phrase appears in 1819 in Estwick Evans Pedestrious Tour of Four Thousand Miles where the intrepid Evans (he took off on a walking tour of the Michigan Territory in the middle of winter) noted, “My dogs . . . helped themselves to the first repast presented, leaving their master to foot the bills.”

However, this relationship between your lowermost extremity and the cost or value of something goes back centuries, and even the oldest records read as if this usage had been going on for even longer.

For example, as early as 1480, “foot” was used to denote the sum or total of an account in Wardrobe Accts. Edward IV where “The foote of the delivereeof stuff” was written. Most authorities agree that this meaning came about from the adding up of a column of numbers (such as in an account ledger) and putting the result at the bottom – or the foot.

This was certainly the meaning of the word in 1520, recorded in W.L. Nash’s Churchwardens’ Acct. Bk. St. Giles, Reading in 1851, where it noted, “in the ffote of the same accompte,” and by 1623, it was well-settled that “it signifies to make the foot of an account. We call it the foot, because we write it below at the foot.” Although this meaning of foot appears to have gone out of fashion, it was still in use as late as 1893 when F. Peel wrote in Spen Valley, “his total losses footed up to £5000.”

Related to the foot of the ledger is a variation meaning the standard rate or value, and this meaning goes back to at least 1588 when H. Oldcastel & J. Mellis wrote in Briefe Instr. Accompts, “[u]se one Foote or Standard of money in your accompt in you Leager.” This denotation was certainly clear by 1594 when it was written in Death of Usury, “[t]he man being dri[v]en to distresse, sels his corne farre [u]nder foote.” This variant also appears to have fallen out of use.

Regardless, the remnant of these uses, particularly referring to the foot of the account ledger where totals are written, “foot the bill” remains alive and well, and lately it seems to be popular when referring to government expenses, such as “taxpayers throughout the country are footing the bill.”