Why Do People Stick Out and Bite Their Tongues When Concentrating?

March 18, 2016 Melissa One comment
Jon K. asks: Why do I sometimes naturally bite my tongue when concentrating on things? 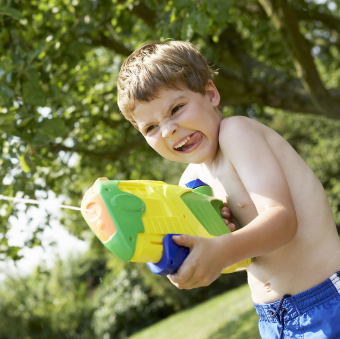 The short answer as to why some people bite their tongue when concentrating is that the tongue requires a surprising amount of brain power to manage- beyond general motor control, it’s covered in various types of sensors constantly providing feedback to your brain about what’s going on in your mouth and making sure your teeth aren’t mashing the tongue. Even when you’re not using it for speaking, it’s still continually moving slightly as it imperceptibly forms words you are thinking about.  All this seemingly involuntary movement provides a steady stream of data for certain parts of your brain to pay attention to, even when those parts of your brain are otherwise trying to concentrate on something else. So the leading theory of why you stick out and bite your tongue is that generally immobilizing your tongue by biting it reduces the amount of stimuli that might otherwise interfere with your attention, particularly when concentrating on certain types of activities that we’ll get into in a minute.

Now for the slightly longer explanation.

Until relatively recently, scientists thought that cognition and motor skills activated and were controlled by distinct portions of the brain, with the former occupying the basal ganglia and cerebellum, and the latter effecting and coming from the prefrontal cortex. This thinking has since changed.  For instance, in 2000, developmental psychologist and neuro-anatomist Adele Diamond published Close Interrelation of Motor Development and Cognitive Development of the Cerebellum and Prefrontal Cortex. Relying on neuroimaging and analysis, Diamond revealed how the human brain’s motor and cognitive functions were linked, and that they could both be activated either for certain motor or certain cognitive tasks.

Throwing more evidence on this pile, in August of 2015, researchers noted that concentrating on specific types of non-verbal communication tasks are more likely to induce such tongue biting/protrusions than others. In the paper, Slip of the tongue: Implications for evolution and language development, they studied the tongue protruding tendencies of children via observing a group of four year olds doing various tasks- children being drastically more likely to stick out their tongues when concentrating than adults. As noted in the paper, these tasks “required varying degrees of manual action: precision motor action, gross motor action and no motor actions.”

While each type of tasks resulted in at least some of the children eliciting the expected behavior of sticking out and biting their tongues when particularly concentrating, the researchers were very surprised to note that it was not tasks with particularly fine motor skills that resulted in the largest likelihood of tongue protrusions, but rather when the children were asked to play a game called “knock and tap.” In this somewhat fast paced task, the children knocked the table when the researcher tapped and tapped when the researcher knocked. This is a game that doesn’t require particularly precise motor skills, but was the only motor task given that simulated many of the elements of basic hand gesture communication. The fact that the children were all right handed and when sticking out their tongues during this specific task tended to stick it out to the right indicated control by the left hemisphere of the brain, which is typically more dominant for language in right handed individuals.  The researchers concluded from all this and similar evidence from past studies that there is a strong connection between the tongue and hands via the language centers of the brain, likely a remnant of what is thought to be the earliest form of human language- basic gestures.

The bottom line from all this is that when you’re concentrating, and particularly on something that requires taking in language and/or producing some of your own (including using communicative motor skills or thinking deeply using your inner voice to drive the thought), your tongue is getting stimulated the whole time, even though you probably aren’t consciously registering it. When particularly high levels of concentration are required, to keep the tongue from distracting your noggin with additional data or tasks to perform when you’re otherwise not actually wanting to use it, the general theory is that sticking out and biting your tongue reduces the need for your brain to manage or pay attention to it, leaving certain parts of your brain free to concentrate more fully on other things.

As to why as you age the tendency to stick out and bite your tongue when concentrating drastically diminishes, this is anybody’s guess at this point with hypotheses ranging from that you simply learn to force yourself not to do this as it’s not entirely socially acceptable (i.e. people will tease you about it); or perhaps your brain gets more efficient at many tasks, requiring less concentration to do them, thus fewer instances of tongue biting; or maybe your brain simply gets better at tuning the tongue out when necessary.