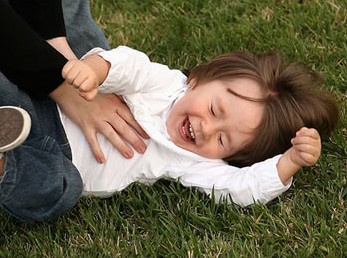 Today I found out why it is nearly impossible to tickle yourself.

It’s very hard to tickle yourself because your brain anticipates things going on around you in order to help speed up response times. More technically, the cerebellum monitors body movements and can also distinguish between expected sensations and unexpected ones, generally resulting in diminishing or completely discarding expected sensations, while paying much more attention to unexpected ones.

So your brain is actively anticipating touch sensations. When it is doing this, it is also actively discarding sensations that it deems unimportant, like when you are typing and it significantly dulls the touch sensation in your fingertips so that you don’t really notice it unless you consciously think about it. This same type of thing happens when you try to tickle yourself.

Researchers at University College London tested this by scanning the brains of subjects while the palms of their hands were touched by themselves and by experimenters. The brain scans revealed that when the touch was externally produced, the somatosensory cortex (involved in processing touch) and anterior cingulate (involved in processing pleasure) parts of the brain reacted much more strongly than when the touch was produced by the subjects themselves. In these latter cases, the brain was using information it has on hand such as motor movements of the finger and arms to anticipate the touch.

Results from a different study showed that the same internal anticipated response applies when subjects manipulated a robot, which then in turn manipulated another robot to touch the subject’s palms. This was only true, however, when the associated touch from the second robot happened right away. When this happened, the cerebellum sends information on the sensation to expect to the somatosensory cortex. With this information, some yet unknown cortical mechanism is triggered that inhibits the tickling sensation from activating.

If the subsequent robotic touch is time delayed, even delayed by as little as a 1/5 of a second, the subjects felt stronger touch sensations, similar to when the touch was not self produced.

So in short, you can’t usually tickle yourself because there is no element of surprise. Your brain is using the various internal sensory data it has available to anticipate exactly what is going to happen based on your movements and visual data. When the anticipated reaction and the actual reaction line up, your brain diminishes or even sometimes completely discards the sensation as a result of that action. On the other hand, when someone else is tickling you, there are unexpected sensations on the skin and these then can result in the tickling sensation being activated.