Who Invented the Chocolate Easter Bunny? 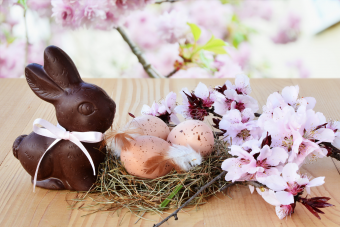 The chocolate Easter Bunny seems to have been invented by people of German heritage, either in Germany or America, sometime around the 19th century.

Many believe (although it’s certainly not settled) that the name Easter is derived from Germanic goddess of spring and fertility, Eostra. In support, they point to one potential origin story of the Easter Bunny from early German myths, where, after a little girl prayed to Eostra for help saving a dying bird, the goddess transformed it into a hare; moreover, she promised it would return each year bringing rainbow colored eggs.

Whether that’s really how we got the Easter bunny or not (and, note, in these old legends it was typically a hare, not a bunny- see: The Difference Between a Rabbit and a Hare), decorating eggs is an ancient practice dating back about 60,000 years (in this case, decorating ostrich eggs).  Evidence of similar rituals are also found with the Ancient Egyptians, Greeks and Persians; moving forward a bit in history, early Christians in Mesopotamia were known to color eggs red to symbolize Christ’s crucifixion.

Regardless of the murky origins, by the 17th century, the Easter Bunny and her eggs were entrenched in the German Easter tradition, which even included the part where she hid the eggs in the garden.

Bringing their culture with them to America, when Germans settled in the eastern U.S. in the 18th century (where they were sometimes called Pennsylvania Dutch), they continued some of the bunny traditions, including having the children place “nests” in the garden for the Oschter Haws (Easter Hare) to fill with colored eggs.

By the 19th century in Germany, edible, pastry and sugar bunnies (sometimes with a hard boiled egg placed in its stomach) were being made, and some type of edible bunnies were also being produced in America.

Moving on to the chocolate variety of bunnies, it’s not clear who made them first, other than it was probably someone of German descent. Tins for chocolate molds dating to 1890 can be found today in Munich, but at the same time, Pennsylvania’s Robert L. Strohecker made a 5-foot-tall chocolate rabbit that he placed as an Easter promotion in his drugstore.

By 1925 in the U.S., chocolate bunnies could be ordered by catalog from the R.E. Rodda Candy Co., and one newspaper specifically noted “the growing popularity in the States of the chocolate rabbit.”

As for the now ubiquitous and slightly disappointing hollow bunny’s origins, it’s not clear when exactly this started either. However, we do know that hollow chocolate bunny molds existed by 1939. This type of chocolate bunny would certainly have appealed to both the penny-pinching of the Great Depression, as well as the wartime rationing of World War II, which for a time even saw the chocolate bunny disappear from the shelves completely.

After the war, chocolate bunnies were back and by 1948 Richard Palmer had introduced Baby Binks, a popular early hollow chocolate bunny. These hollow bunnies are cheaper to make, more visually pleasing in some cases (as they can be made much larger for the same cost of a smaller solid bunny), and easier on the jaws and teeth to eat. As Mark Schlott, the vice-president of the United States’ largest hollow bunny company, put it: “If you had a larger-size bunny and it was solid chocolate, it would be like a brick; you’d be breaking teeth.”  The one major practical downside of the hollow chocolate bunny is potential issues with packaging and shipping, as they are significantly more fragile than their solid bodied brethren.