Myth: The Candirú fish can swim up your urine stream if you pee into the Amazon. 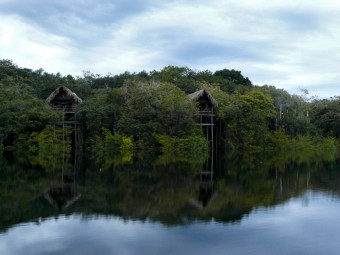 If you’ve never heard of the Candirú, also known as the pencil fish, the toothpick fish, the vampire fish and the fish that SWIMS INTO YOUR PEE HOLE, Google any of those names above (yes, even that last one, but maybe not at work). You’ll see hundreds of pages talking about this thin, translucent fish and its nasty habit of swimming up a stream of urine and lodging itself into the urethra of an unfortunate man or woman.

The vast majority of these stories are from men. On the surface, this perhaps makes sense as men have significantly longer urethra’s than women (15-29 cm for men, vs. an average of only about 4 cm for women, making it a tad small for most Candirú which can grow as large as 40 cm, though are usually only a few centimeters).  Of course, the fact that there is a very large discrepancy here should be the first clue that this isn’t true.  After all, the Candirú wouldn’t know anything about the length of urethras and presumably would be just as attracted to a woman’s as a man’s if at all.

Luckily for us all, the fish can’t actually do this, which hasn’t stopped people claiming it can and often does. One of the early accounts of this was in 1855 when Francis de Castelnau stated he was told by a South American fisherman not to pee in the water, even when standing outside of it, because the fish  in question “springs out of the water and penetrates into the urethra by ascending the length of the liquid column.”

First thing’s first, according to all known laws and rules of fluid dynamics, swimming directly up a stream of human urine is impossible. A few naysayers in the comments may bring up the Salmon as a counter to that point, which as we all know is totally capable of swimming up waterfalls…. For those people, it’s important to first note that although Salmon can swim against a strong current, when it comes to waterfalls or indeed any vertical obstacle, they jump. And let’s be honest, if there was a fish out there capable of leaping directly into your penis, we’d have dropped a bomb on it the second its Wikipedia article had been finished.

If you think about it, this makes sense, not only would the fish have to stay entirely within the stream of urine fighting against both the force of falling water and gravity, but it’d also need the stream to remain intact for the entire journey, which would have to be pretty quick. We don’t want to get into too many details, but fellas, if you’re able to produce a stream of urine thick enough for a fish to swim up, you’re just tempting fate reading an article by a guy with the last name “Smallwood”.

So if the Candirú can’t straight up boss its way up a stream of your urine while you’re taking a whizz, surely that leaves it simply waiting for you to submerge your giggle stick in the water so it can get in that way, right? Well, luckily for everyone reading, this too is very, very unlikely. When Candirú expert and possible hero, Dr Stephen Spotte was asked what the odds of a Candirú lodging itself in your 9 iron were, he responded quite flatly, “about the same as being struck by lightning while simultaneously being eaten by a shark“. Our math might be a little off here, but we think that ranks as being quite unlikely.

So where does this rumor come from? While there are references of this as far back as 1829 (in that case from biologist C.F.P. von Martius who was told of this happening by natives), the myth saw its biggest surge in popularity thanks to a book written in the 1930s aptly called, “The Candirú” by a Dr Eugene Gudger. In it, Gudger, like von Martius before him, recounted old tales from South America, even though said tales were often third hand accounts of the stories and no person interviewed had actually witnessed this.  It should be noted, that Gudger also wrote an article in 1930 published in The American Journal of Surgery outlining why he was skeptical this fish could actually do what natives said it could- namely swim up your urine into your urethra.

In terms of the tales themselves, it’s largely believed these were either exaggerated or some researchers speculate were the result of Piranha attacks, another, more deadly fish that lives in the same waters and which native men often take protective measurements against, guarding their bits while bathing.

As the locals could probably well tell the difference between Candirú and the very different looking Piranha, another more likely explanation is kidney stones, which as anyone unfortunate enough to have had them will tell you is about the worse pain a human can experience. On that note, there are reports that natives in the Amazon would drink a tea made from the fruit of jagua tree to dissolve the “skeleton” of the fish. According to The Year Book of Urology printed in 1944, the tea really is effective at combating kidney stones. Given that the fish in question is translucent and small, one can see how these people might become convinced it must be that fish getting into their bodies that is causing these “skeletons”.

The one, real piece of modern evidence that suggests that a Candirú could actually lodge itself in your babymaker comes from a single case in 1997. The case, which involved one, Dr Anoar Samad is the only known instance in which a Candirú has supposedly been removed from a human male.

The case seems fairly legit, since the surgery to remove the fish was not only widely covered, but was filmed and photographed too. In this case, the victim in question claimed the Candirú jumped out of the water and into his urethra as he was standing up to his knees in the water while peeing.

However, although the story was widely reported and is still often quoted today on shows about people surviving weird injuries, in which Dr Samad himself still appears, the corpse of the fish itself was never official recognised as a Candirú and medical opinion from doctors not trying to get on TV agree that it was either a hoax, or that the entire legend surviving the fish is a myth.

In fact, the aforementioned biologist Dr Stephen Spotte went down to Brazil to investigate the event two years later and found many of the claims and evidence presented highly suspicious, not the least of which was the claim that the fish jumped out of the water and swam up the urine stream into the urethra, which simply isn’t physically possible based on fluid dynamics.  But wait, there’s more.

The fish that was supposedly taken from the man’s urethra was 11.5 mm in diameter.  For your reference, a typical male’s urethral opening is only about 6 mm.  While it’s certainly possible to make it expand to allow such a fish to enter, the fish would have had to propel itself with some pretty amazing force to make this happen by itself- such a force it couldn’t have generated leaping out of the water, nor from swimming up a stream of liquid that was likely thinner than the fish itself.

Of course, there’s always the chance that Dr Samad was telling the truth and that one unlucky sod really did have his day ruined when a fish jumped out of the water and swam into his love gun. I mean, people do win big ticket lotteries- it’s just extremely unlikely given the known facts of the case.

Further, also contrary to popular belief, Candirú is not attracted to human urine.  In fact, a study done in 2001 by Dr Stephen Spotte et al. showed that the primary way this fish looks for hosts is, in fact, by looking (oddly enough) using their eyes.  And while many a man might think his penis is selfie-worthy, I’m guessing that the average Candirú isn’t so impressed that it feels compelled to jump out of the water to take a closer look.

Now, all that said, for the ladies out there… we’ve got some bad news.  While there has never been a documented instance of a Candirú lodging itself in a woman’s urethra, there has been a few credibly documented instances of them lodging in vaginas.  However, in this case, while no doubt horrifying, it’s a fairly simple matter to get the fish out, such as in 1891 when Paul Le Cointe removed one from a vagina by simply pushing it forward slightly, turning it around, and pulling it out. You push forward and turn it around first so that its spines lie flat, rather than cause a bit of damage as they would if you just pulled it out backwards.