Lobsters Do Not Mate for Life 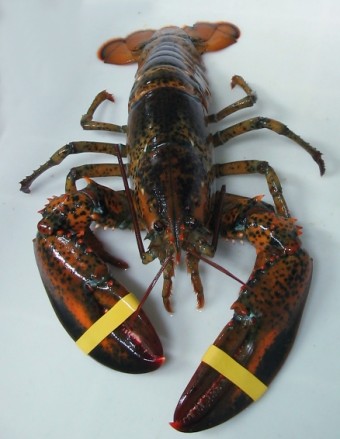 Today I found out that Lobsters do not mate for life, contrary to popular belief.  The origins of the myth that they do mate for life are not completely known, but this myth was first publicly popularized on an episode of Friends (Episode 2.14) where Phoebe says Ross is Rachel’s “lobster” and goes on to say that it is a “known fact that lobsters fall in love and mate for life…”

The truth is that not only do Lobsters not mate for life, but the male lobster pretty much gets it on with every female lobster that comes a knockin’.  With lobsters, the female seeks out the male.  Occasionally, a line will even form outside the male’s little lobster home, with each female waiting her turn for some lobster lovin’.

There’s only one problem- the male lobster has no interest in mating.  He’d rather go out and fight some more with the other males.  The females, however, have their ways to convince him maybe he’d rather be a lover not a fighter… at least for a short while.  In this case, she does so by essentially drugging him and then having her way with him. 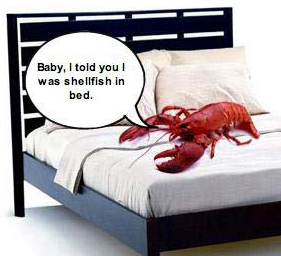 Specifically, first, when a mature female lobster is ready to molt, the female lobster will approach the dominant male’s den.  She will then give off a pheromone and wafts it into his den.  The male will then emerge with claws raised ready to attack. (He’s got a one track mind, but it’s not for sex).  The female will then continue to pee on him from nozzles under her eyes; yes, this is where the aforementioned pheromone comes from.  As he smells the pheromone in the female pee, he will become somewhat more docile and less interested in fighting temporarily.  The female will then either turn away submissively or more likely will respond by briefly fighting the male before giving up, letting him win.

The male lobster then either chooses to eat her or puts on some Marvin Gaye and gets to business.  Generally, he’ll do the latter; occasionally though, if he’s not sufficiently under the influence of her lady pee, he will decide to do the thing male lobsters are best at, namely attacking one another.  Given she’s, at this point, completely defenseless, if he chooses to attack her, she makes for an easy snack before letting in the next lady in line. (Got to keep up your energy!  Being the top male lobster is hard work; fighting by day, lobster lovin’ by night.)

If he decides to go the Marvin Gaye route, he will gently turn her limp body over on to her back, being careful not to tear her very soft fleshy bits (women hate that). Finally, he’ll very gently mate with her.

After the deed is done, he’ll let her stay in his den for a week or so until her hard shell grows back.  While she is without her shell and very vulnerable, he will protect her by doing what he does best, beating up all the other male lobsters in the area.  Once her shell has grown back, he’s no longer attracted to her because she’s gained a ton of weight since they got together… and is no longer peeing on him; so he kicks her out.  At this point, the next lady lobster in line will take her turn with him.

So next time you’re sitting down to a nice plate of freshly boiled lobster, you can feel a little less guilty about eating the lobster, as you didn’t just rob some poor creature of its life-mate.  You did, however, just have a living creature boiled alive so… mmmmm; now that’s tasty, tasty murder.