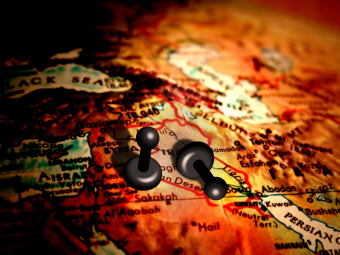 Partly because of the “Better Dead than Red” paranoia that pervaded American politics in the 1950s, Arab nationalism in the Middle East ended up getting lumped in with Communism as something the U.S. was dead set on stamping out. Things came to a head with the Suez Canal Crisis.

In 1956, the U.S. government reneged on its promise to provide aid to Egypt for its Aswan Dam project (and to provide weapons to modernize the country’s military), citing Egyptian President Gamal Abdel Nasser’s anti-West stance and his cozying up to the Soviet Union as justification. (Nasser had gone back and forth negotiating with the Soviets and Western powers, more or less to get the best deal, with the Soviets ultimately coming out on top.) Nasser, in turn, nationalized the Suez Canal, provoking military action by Great Britain, France, and Israel.

After significant international pressure was applied to this little triumvirate, they backed off, with many historians citing this as a convenient marking point for Britain falling from its former perch as one of the world’s top powers. These countries ended up with egg on their faces and little more for their efforts, while Egypt and the Soviets came out boasting a major propaganda victory. The U.S. was particularly displeased with the whole thing as the result was exactly what they didn’t want – political power in the Middle East seeming to veer toward the Communist world.

Of course, there was a lot at stake here- namely all that Middle Eastern oil so vital to the American and European economies. If this all fell under the control of the Soviets, it could potentially cause major issues for the West. The Soviets were aware of this and did their own part in jockeying for position in the region.

President Eisenhower’s solution was a plan of action that came to be known as the Eisenhower Doctrine. He pitched his idea to a joint session of Congress on January 5, 1957. The doctrine gave the President the authority to provide economic and military assistance to “any nation or group of nations in the general area of the Middle East” fighting to remain free from Communism. After several months of heated debate, Congress finally passed the resolution.

The Eisenhower Doctrine was invoked several times over the next couple of years. For instance, when King Hussein of Jordan ousted two pro-Soviet members of his cabinet in April of 1957, Eisenhower sent the Sixth Fleet to the Mediterranean claiming Jordan’s independence was crucial to U.S. interests. When things settled down in the region, Ike attributed it to American intervention.

Tensions in the Middle East remained high, however. Lebanon was imploding from within, but appealed to the U.S. under the Eisenhower Doctrine claiming Syrian aggression. It wasn’t until there was a coup in Iraq resulting in pro-Soviet leadership that Eisenhower acted by sending 15,000 troops to Lebanon.

Eisenhower believed that the turbulence in Lebanon was the work of Communist insurgents and if they were not stopped Communism would engulf the entire Middle East. His unfamiliarity with local concerns made him drastically overestimate the risk of losing the region to communism, leading him to conclude that any nationalist movements were hostile to American interests and potentially evidence of the locals working hand-in-glove with the Communists.

In the end, the whole thing mostly backfired, with U.S. intervention beginning to see some of the negative attitudes of the locals shift a bit from countries like Britain to the United States.  It’s also very possible that the Doctrine in question simply fought an imaginary threat, particularly with regard to Egypt where President Nasser had no real love of the Soviet Union or communism.

Ike later seemed to agree the whole thing was a mistake. Six months after the Marines landed in Lebanon, Eisenhower was reevaluating his entire game plan in the Middle East. The administration had decided it was easier to work with the locals than to rail against Arab nationalism, and by 1958, instead of sending troops to help secure U.S interests, the U.S. was sending $150 million to Nasser and Egypt alone to garner its good will.