This Day in History: January 13th- A Couple of Dumb-Bells 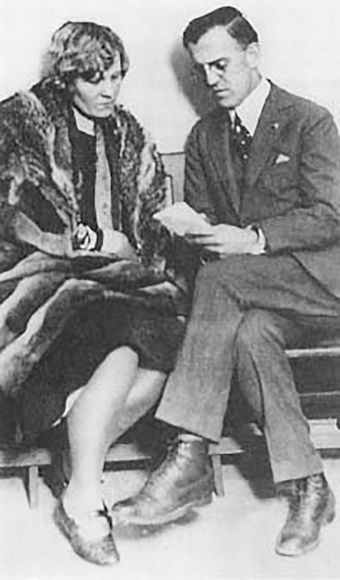 Long Island housewife Ruth Snyder and the also-married Henry “Judd” Gray were having a torrid affair, beginning in 1925. In stereotypical fashion, Ruth suggested they murder her husband Albert for the insurance money. Henry was hesitant at first, but Ruth ultimately convinced him, with Gray later claiming she threatened to tell his wife of their affair if he didn’t take part.

If the idea of agreeing to murder to avoid one’s wife finding out about an affair seems to indicate a lack of intelligence, this wasn’t the only instance of this type of stupidity. In the aftermath of the murder, it was immediately obvious neither individual possessed much in the way of foresight or common sense, leading to the whole affair being labeled “The Dumb-Bell Murder Case” by famed newspaperman Damon Runyon.

Ruth had previously made several attempts to kill her husband, including twice trying to kill him via disconnecting the gas line on their oven and again trying via running their car in the garage with the garage door closed in hopes of filling the house with carbon monoxide. Another time she poisoned his bootlegged whiskey, but it resulted in it tasting awful, so he dumped it out. (Incidentally, around this same time the U.S. government tried the same trick to stop people from drinking, resulting in the deaths of over 10,000 Americans. When this was revealed, Congress debated whether to ramp the program up to get rid of more undesirables, but better sense ultimately prevailed.)  In one instance while Albert was sick, Ruth also added various drugs to the medicine he was taking, hoping the combination would kill him.  She was unsuccessful in all attempts.

So why kill him and not just divorce him?  Beyond the scandal of divorce of the day, and that women at the time had few means to support themselves if they did such a thing, Albert had a total of three life insurance policies (with some encouragement from Ruth on one and a bit of forgery on the others) totaling approximately $80,000 (about $1.1 million today).

With her unsuccessful attempts to murder her husband, Ruth continued to put pressure on Judd for help, reminding him of the hefty sum of money they’d stand to collect when Albert died. Judd finally relented, as mentioned supposedly after Ruth switched from the carrot to stick method stating she’d tell Judd’s wife of their affair if he didn’t, and in March of 1927, the pair decided to follow through on their plan to kill Albert Snyder.

Unfortunately for them, it wasn’t particularly well thought out.

While contradictory accounts by the two lovers later tripping over themselves to paint the whole thing as the other person’s doing make it difficult to separate fact from fiction, the generally accepted story is that while Ruth was out with Albert and their daughter, Lorraine, for the evening, Judd entered their home through a door Ruth had left unlocked for him and hid in a spare bedroom. When the Snyder family returned and Albert and Lorraine were both sleeping, the lovers entered the master bedroom with chloroform soaked rags and a window sash weight.

Judd hit the sleeping Snyder in the head with the weight, but it was only a glancing blow that merely woke him up. He yelled for help and attempted to seize his attacker, but Ruth grabbed the weight and brought it down hard on her husband’s skull, killing him.  For good measure, they tied a wire around his throat to strangle him and stuffed chloroform-soaked cotton up his nostrils.

Next, they walked through the house, scattering some things about and hiding others to give the appearance of a robbery. As a finishing touch, Judd loosely bound and gagged Ruth, then left the scene and the area.

After some time had passed (during which Ruth originally claimed she was unconscious), Ruth wriggled her way into her sleeping nine year old daughter’s room, woke her up and got her to untie her bonds.

The police were soon called, but after their arrival, it didn’t take them long to sense something was seriously amiss with this strangely calm woman who had just witnessed her husband’s head being squashed like a grape and had herself been tied up and left for dead.

In addition to her nonchalant demeanor, the police were suspicious over the fact that there was no indication of forced entry to the home. Ruth also claimed she’d been struck on the head and was unconscious for a time after, yet there were no signs of her having taken a blow, not even the slightest little red mark. He hands and feet also showed no signs of having been securely bound.

Beyond all of this, they also found Albert’s revolver, which in their opinion looked like it was placed to make it seem as if Albert had resisted the burglars. Why he hadn’t fired it at the apparently unarmed burglars if he had it in his hand during the scuffle was a mystery to the police. They also soon found the jewelry Ruth claimed had been stolen hidden under a mattress.

If all this seemed to indicate Ruth was lacking in the brain cell department, she didn’t do herself any favors in her reaction to the police telling her that the burglary looked fake. Instead of reiterating that she’d seen the burglars and been involved in the tussle, she simply replied in a bit of a panic, “How can you tell?”

The police’ big break came when they found a memento Albert had from his former fiancée, Jessie Guishard, who had died while the pair were engaged and who Ruth would later become extremely jealous of. Among other things, Albert subsequently named his boat after Guishard, not Ruth, and even hung a picture of Guishard up in their home, according to Ruth telling her after the couple had wed that Guishard had been “the finest woman I have ever met.” Ouch.

Why was this little item important to the case? The memento that the police had found had the initials J.G. on them. The police subsequently asked her if she knew anything about “J.G.”, who they thought may have been a lover of Albert’s, and she replied, “What about Judd Gray?… Has he confessed?”

They then told her that Gray, who they had not previously known about at all, had indeed confessed to the murder.  After that, she spilled the beans herself, though painted the whole thing as Gray’s idea and that he had done the actual murder, as well as forced her involvement in arranging things and ransacking the house.

She also gave them another important piece of information- the hotel where Gray was presently staying in Syracuse, New York.  Police were quickly sent to the hotel to arrest Gray. He initially balked at their accusations, stating that he had been at the hotel all night and could prove it. But once the police explained that Ruth had confessed, he changed his tune and stated that Ruth had forced him to take part in the murder.

They were both put on trial in May of 1927, with Ruth and Judd pointing fingers at the other for the murder, and for corrupting each other in general. The trial inspired a media circus- sordid and heinous, the people of the Roaring 20s were both fascinated and repelled by the couple’s actions, as well as amazed at their stupidity in planning and executing the crime. In short, people couldn’t get enough of the story.

After deliberating less than two hours, it was decided by the jury that the general story Gray told of events was likely the correct one and both defendants, not just Gray, were found guilty and sentenced to death.

Sentencing a woman to death was no small thing at the time. In fact, Ruth was the first woman to be sentenced to die in New York since 1899. There was significant controversy over this, despite her crime, but New York state governor Al Smith justified denying her clemency by stating, “Equal suffrage has put women in a new position. If they are equal with men before the law, they must pay the same penalties as men for transgressing it.”

Both went to the electric chair in Sing Sing on January 12, 1928 – ten months after executing their ill-planned scheme. 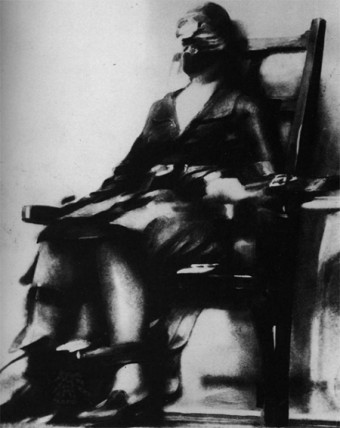 Hatching a scheme of their own, the New York Daily News hired a reporter from out of town, Tom Howard of the Chicago Tribune, to attend the execution. They also equipped him with a special camera strapped to his ankle. Via pointing his shoe at Ruth while carefully crossing his legs to trigger the camera, he managed to snap a photo of Ruth Snyder in the electric chair at the very moment the current hit and threw her body back against the chair straps, blurring the image slightly. This photo shocked the nation after it graced the cover of the following day’s paper on January 13, being dubbed “the most famous sneak shot in journalism.”

The nearly forgotten victim in all this was nine year old Lorraine Snyder, who went to bed one night with her parents both very much alive and woke up the next to her mother bound and gagged (and within a few hours arrested) and her father with his head bashed in. On the day before her execution, Ruth also declined the opportunity to say goodbye to her daughter (though did write her a letter with unknown contents that she instructed be given to Lorraine when she was “old enough to understand”). It also appears that at the point of her mother’s execution, Lorraine was not aware that her mother had killed her father and possibly not even that her mother was being executed at all.

In the aftermath, both a custody battle and insurance fraud trial waged on, with Albert’s brother being vehement that no one from Ruth’s family should get the poor little girl (requesting he be allowed to appoint a suitable guardian) and Ruth’s mother, Josephine Brown, requesting custody for herself.  Brown ultimately prevailed and was granted guardianship of Lorraine.

As for the life insurance, initially $30,000 was paid out, but the other two policies that had been issued via alleged forged signatures (totaling $50,000) were disputed, despite the premiums having been paid up to the point of Albert’s death. Arguments were made by Brown’s lawyers that she was destitute and had no money to take care of Lorraine with, but ultimately the policies were ruled invalid.