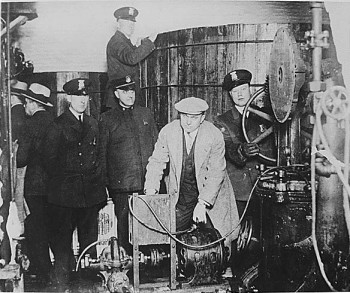 Today I found out that in an effort to scare people away from drinking alcohol, the American government once poisoned certain alcohol supplies; this resulted in the death of over 10,000 American Citizens.

This, of course, was during Prohibition.  The government became frustrated with the fact that despite the manufacture, sale, and transportation of alcohol being banned, the number of people drinking alcoholic beverages was markedly higher than it was before Prohibition.  So to try to get people to stop drinking, the government decided to try a scare tactic.

One way bootleggers of this time made alcoholic beverages was to use denatured, industrial alcohol as the base.  Denaturing the alcohol is simply a process to make it undrinkable, usually by adding something that makes it taste or smell disgusting or will induce vomiting.  This was originally done (and is still done to this day) in order to allow companies to get around having to pay the high taxes associated with the manufacturing and sale of alcohol meant to be drunk.  Alcohol used industrially, for non-beverage applications, are denatured and thus, they don’t have to pay these taxes and so it is significantly cheaper, gallon for gallon.  Without this tax break, literally thousands of industrial products would become drastically more expensive than they currently are.

During prohibition, this denatured alcohol was often stolen from companies that made industrial alcohol used in various paints and solvents and the like.  The bootleggers would then have their own chemists whose job it was to make the alcohol palatable again, basically undoing the denaturing process or to “renature” the alcohol.

With an estimated 60 million gallons of industrial alcohol stolen annually in the 1920s to be later renatured and sold as drinkable alcohol, the government, under President Coolidge, decided to up the stakes and make some of the denaturing formulas lethal, instead of just designed to make the alcohol unpalatable.  To do this, they’d generally add things like methyl alcohol (the main denaturing chemical at 10% added, even today); other chemicals added are things such as kerosene, brucine, gasoline, benzene, cadmium, formaldehyde, chloroform, carbolic acid, acetone, and many others that were difficult for the bootlegger’s chemists to get out when they’d renature the alcohol.

After the first 100 or so people died shortly after the new denaturing process was released around Christmas, health officials were outraged and the news media picked up the story as intended.  Unfortunately, the government’s plan didn’t quite work from that point on.  It didn’t scare people away from drinking and rather had little to no effect on people’s consumption of alcohol; instead, the estimates are that it resulted in the deaths of over 10,000 people with a much larger number severely sickened and many blinded by the poisoning.

As New York City’s medical examiner Charles Norris stated: “The government knows it is not stopping drinking by putting poison in alcohol.  Yet it continues its poisoning processes, heedless of the fact that people determined to drink are daily absorbing that poison. Knowing this to be true, the United States government must be charged with the moral responsibility for the deaths that poisoned liquor causes, although it cannot be held legally responsible.” (Chuck Norris fighting the man even back then) 😉

People at the time, though, were split on the poisoning program, even with the deaths that were happening because of it.  One side felt that the people who were drinking the illegal alcohol got what they deserved, particularly because they knew the risks and broke the law anyways; the other side felt it was a national experiment on exterminating members of society that the government felt were undesirable as American citizens.  As one Chicago Tribune article in 1927 stated: “Normally, no American government would engage in such business. … It is only in the curious fanaticism of Prohibition that any means, however barbarous, are considered justified.”

Now, to be clear, the various governments of the world still require denaturing of alcohol that is not for oral consumption and the standard requirement of 10% methyl alcohol is still in effect in most countries.  This isn’t really a problem anymore because people have much better ways to get their alcohol than trying to deal with denatured alcohol.  The problem at the time was that the government knew full well that people would be drinking this poisoned alcohol and they hoped the deaths that resulted from this would scare other people away from drinking.  Further, when it was clear that it wasn’t scaring anyone away from drinking and literally thousands were dying per year with significantly more than that severely sickened, they kept the program going anyways, though it was hotly debated in Congress.

So next time you start thinking the U.S. government is impossibly screwed up today; headed down the tubes; and beyond fixing, well, if you study American history much at all, it’s pretty clear it used to be a lot more screwed up than it is today, not just concerning this issue, but many, many others.  And yet, we’re still here. 🙂