This Day in History: January 14th- The Human Be-In 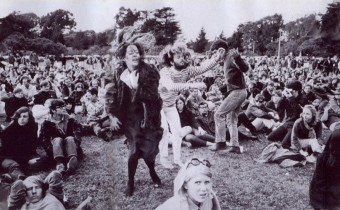 The Human Be-In, or the Gathering of the Tribes, on January 14, 1967 in San Francisco’s Golden Gate Park brought hippies, LSD and psychedelia to national attention. It was the harbinger of the celebrated Summer of Love, and made Haight-Ashbury the epicenter of a growing movement of young people ready to follow acid-dropping Harvard professor Timothy Leary’s advice at the Be-In to “turn on, tune in, and drop out.”

“Turn on” meant go within to activate your neural and genetic equipment. Become sensitive to the many and various levels of consciousness and the specific triggers that engage them. Drugs were one way to accomplish this end. “Tune in” meant interact harmoniously with the world around you – externalize, materialize, express your new internal perspectives. “Drop out” suggested an active, selective, graceful process of detachment from involuntary or unconscious commitments. “Drop Out” meant self-reliance, a discovery of one’s singularity, a commitment to mobility, choice, and change. Unhappily my explanations of this sequence of personal development were often misinterpreted to mean “Get stoned and abandon all constructive activity”.

Along with Tim Leary, many other leading figures of the counterculture were at the Be-In, including Allen Ginsberg, Dick Gregory, Jerry Ruben, and Michael Bowen, who masterminded and organized the event. Popular bands like the Grateful Dead, Jefferson Airplane, and the Quicksilver Messenger Service provided entertainment for the twenty to thirty thousand people estimated to be in attendance. The Diggers handed out free food, and Owsley “Bear” Stanley brought massive amounts of “White Lightning” LSD to the party.

Both the Human Be-In and the hippie movement as a whole was the passing of the torch from the beat poets to the disaffected generation of students living in the San Francisco area at the time. They all shared the same core values – environmental awareness, communal living, liberal political beliefs and the quest for higher consciousness. This transition was personified perfectly by Allen Ginsberg, the beat poet who attended the happening dressed head-to-toe in white, chanting mantras, and dancing with joyous abandon.

Michael Bowen came up with the name “Human Be-In” at another event, the Love Pageant Rally. It incorporated humanist values with the current strategy employed by political activists – sit-ins. The practice had been used throughout the 1960s to protest segregation and outmoded college and university policies. The Human-Be-In was conceptualized to protest the banning of LSD in California on October 6, 1966.

Poet and novelist Michael McClure described the Be-In as:

a spiritual occasion, culminating from the countless preceding events, dances, thoughts, breaths, lovemakings, illuminations. The Be-In was a blossom, it was a flower. It was out in the weather. It didn’t have all its petals. There were worms in the rose. It was perfect in its imperfections. It was what it was and there had never been anything like it before.

LSD, more technically known as Lysergic acid diethylamide was first synthesized on November 16, 1938 by Swiss scientist Dr. Albert Hofmann.  Dr. Hofmann was working at the Sandoz Laboratories in Switzerland researching ergot alkaloid derivatives for use in pharmaceuticals.  Ergot alkaloid’s are a type of ergoline alkaloid which is found in a certain type of fungus.  Ergoline has many medicinal uses, including being used in the treatment of migraines and Parkinson’s disease.