The Last Public Hanging in the United States 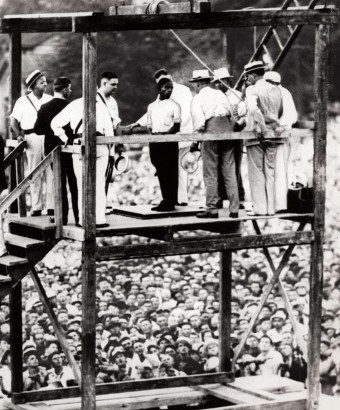 By the time Rainey Bethea was executed on August 14, 1936, most of the United States had ceased executing people publicly. This was in large part because of the natural ghoulishness of the event, combined with the propensity for mistakes that make the whole thing even more disturbing to watch. (This is still a major problem today with approximately 7% of lethal injection executions being botched in the United States.) However, in Kentucky in 1936 an execution could still be held publicly and, according to the jury at his trial, Bethea deserved such an end.

An orphan since about the age of 10, a 26 or 27 year old Bethea was accused of robbing, raping and strangling to death a wealthy 70-year-old Elza Edwards in Owensboro, Daviess County, Kentucky on June 7, 1936. Because a potential death sentence for robbery and murder under Kentucky law called for electrocution at the state penitentiary in Eddyville, the prosecutor, wanting the potential execution to take place in Owensboro, only went forward with the charges of rape, which carried the possible sentence of public hanging.

Prior to his trial, Bethea had made several confessions describing how he’d been drunk and had snuck into Elza’s room through a window. Although it’s very possible these confessions were coerced (Bethea claimed they were after being sentenced to death), it should be noted that his fingerprints and his ring were found in Elza’s bedroom after her body was discovered. Further, in one of his confessions he also told the police where he hid the items he stole from Elza; those items were found in the barn he specified. Anticipating that people would claim they had forced Bethea to confess, during his second confession, police invited notary public Robert M. Morton and reporter George H. Koper to attend the confession as witnesses to the fact that, at least while those two were present, no coercion took place.

Lawyers were appointed to represent Bethea, including noted anti-death penalty advocate William W. Kirtley. While they initially subpoenaed four individuals, in the end, none of the defense’ witnesses were ever called at trial. This was because, at the trial, Bethea pled guilty.

After the prosecutor closed his case on June 25, 1936, the judge instructed the jury that their only job was to decide whether Bethea should get between 10 and 20 years in the state pen or the death sentence. The jury deliberated for less than five minutes and returned with the sentence of death by hanging, a mere three weeks after the crime was committed.

The fact that the whole thing from murder to scheduled hanging was to take place in only about two months, and that a young black man who had previously only been convicted of a few minor, non-violent crimes was now being sentenced to death without any real defense on his behalf being performed, more than a few cried foul.

As such, post-sentence, Bethea found a cadre of black lawyers willing to donate their time to his case. They attempted to overturn the first conviction through various means, but all to no avail. They did, however, manage to get him a hearing on August 5th in Louisville in front of District Judge Elwood Hamilton. During this hearing, Bethea stated all five of his signed confessions were coerced and that he was not given full details of what he was signing in each case. On top of that, he claimed his previous lawyers had also forced him to plead guilty. In the end, after listening to the testimony of several witnesses who refuted Bethea’s claims, Judge Hamilton decided he wasn’t buying it and the sentence stood. 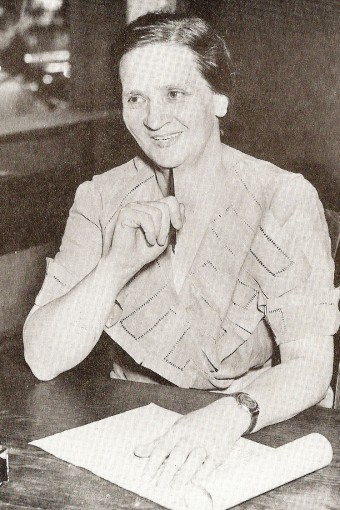 While normally such an execution wouldn’t have attracted much notice outside of the region the crime was committed, this particular hanging quickly became a topic of great interest throughout the United States. This was not because many continued to hold to the notion that Bethea was actually innocent- the evidence against him was just too convincing despite initial skepticism- but rather because the person charged with hanging Bethea, the County sheriff, was a woman, Florence Shoemaker Thompson- the first female sheriff in the U.S. tasked with executing someone.

Thompson had been appointed to the post of sheriff by the county judge in April of 1936 after the previous sheriff, her husband Everett, died unexpectedly of pneumonia at just 42 years old. Thompson would later be elected officially, garnering a whopping 9,811 votes vs. her two opponent’s 2 and 1 votes respectively.  (Perhaps because of this particular execution, a task she loathed on personal moral grounds, she chose not to seek the position a second time. She was, however, subsequently appointed a deputy sheriff by her successor, a position she held for nine years.)

Anticipating the hoopla surrounding a young, condemned black man being led up the gallows to be hung by a white, female sheriff in the South, and the keen interest their followers would have in hearing about it, reporters from across the nation flocked to the event.

Given the national attention, beyond numerous death threats directed at herself and her children, Thompson also received offers to assist with the execution. In one case, a U.S. Marshall wrote to her and suggested she retain the services of one G. Phil Hanna, a farmer from Illinois who had overseen 69 hangings up to this point. Hanna started in the trade after being disturbed by a botched hanging he witnessed in which the condemned seemed to suffer greatly before finally dying. Hanna then studied how to hang someone as humanely as possible and started offering his services at various executions, often without asking for any compensation. After being asked by Thompson, Hanna agreed to help out in Bethea’s execution.

Thompson also received a letter from Arthur L. Hash, a former Louisville, Kentucky police officer, who offered to be the one to actually pull the lever that would open the trap door. Thompson felt that, as a Christian, it wouldn’t be morally right for her to pull the lever ending Bethea’s life. She further stated, “I did not want people pointing to my children and saying their mother was the one who hanged a Negro at Owensboro.” Needless to say, given that as sheriff there was no way for her to get out of presiding over the execution, she accepted Hash’ offer for him to perform the actual killing act. All Hash asked was that his name be kept secret. 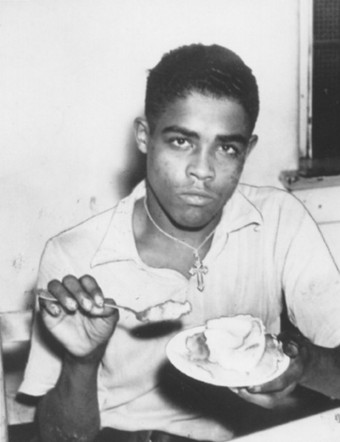 With all prepared, on August 13, 1936, Bethea had a last meal of fried chicken, cornbread, mashed potatoes, pork chops, pickled cucumbers, lemon pie, and ice cream in his cell in Louisville. Early the next morning, he was transported to the Owensboro jail.

Approximately 20,000 people gathered around the gallows to witness the execution. (See: How Do the Media and Police Estimate Crowd Sizes?) As for Bethea, he had to make a two-minute walk from the jail to the gallows, escorted through the crowd by two officers. While contemporaneous reports from non-local papers would go on to state that there was a carnival-like atmosphere with a festive, jeering crowd, the local papers and later research that included, among other things, accounts from eye witnesses revealed that the crowd was predominately somber and quiet throughout the ordeal and that once the priest held up his hand for silence, “You could hear a pin drop.”

Once Bethea had ascended the gallows, he gave his last confession to the priest, declined the offer to make a last statement, was strapped tightly at the ankles, legs and arms/chest, and had a black hood placed over his head. Hanna fitted the rope around Bethea’s neck, and carefully adjusted it to maximize the chance that the neck would break and Bethea would suffer as little as possible. He then signaled to Hash to pull the lever to open the trap door … with no result.

You see, Hash showed up to the execution quite intoxicated and reportedly seemed to not notice Hanna’s signal. Upset that things weren’t going perfectly as previously planned, Hanna shouted at Hash: “DO IT!” but Hash, for whatever reason, remained still. 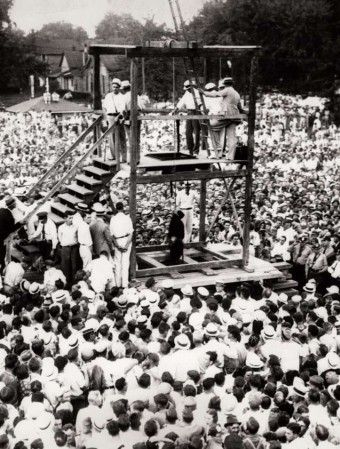 Finally, a deputy shifted his position such that he leaned onto the lever and the trap door was opened. Properly tied and positioned by Hanna, the rope snapped Bethea’s neck. After 14 minutes, his body was taken down once two doctors confirmed that he was dead.

Perhaps as a substitute for what they had seemingly hoped would be a dynamite story that, in the end, turned out to be mostly routine and orderly outside of the drunken Hash, many contemporaneous reporters mis-described events. For instance, it was reported by some outlets that Sheriff Thompson fainted at the critical moment at the gallows, which was why someone else had to pull the lever. (Aside if you’re curious, see Why Women Fainted So Much in the 19th Century)

Yet another wildly exaggerated account stated, “Cheering, booing, eating and joking, 20,000 persons witnessed the public execution of Rainey Bethea, 22, frightened Negro boy, at Owensboro, Ky., yesterday. In callous, carnival spirit, the mob charged the gallows after the trap was sprung, tore the executioner’s hood from the corpse, chipping the gallows for souvenirs. Mothers attended with babes in arms, hot dog vendors hawked their wares and a woman across the street held a necktie breakfast for relatives. The woman sheriff, at the last minute, decided not to spring the trap.”

Time Magazine even went so far as to report on August 24th that “tipsy merrymakers rollicked all night. ‘Hanging parties’ were held in many a home…”

Partially due to the media storm and the many exaggerated accounts, no further public hangings were held in the United States in the regions that still allowed them. As for Kentucky, two hangings would normally have taken place publicly but it was decided to forgo having a crowd present. In response to all this, within two years Kentucky had changed its laws regarding hangings, with the last person to be privately hanged by that state being Harold Van Venison on June 3, 1938. Like Bethea, he was also convicted of rape.