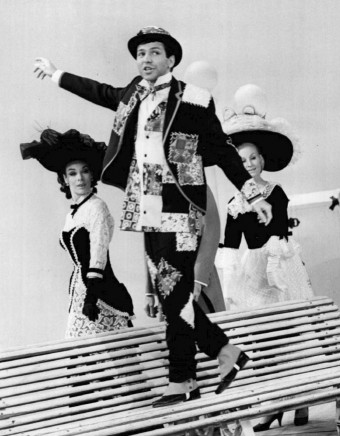 On December 10, 1963, Frank Sinatra received a phone call from a group of co-conspirators who had been holding his son, Frank Jr., hostage since December 8th. They demanded a ransom payment of $240,000 (about $1.8 million today), which Sinatra paid immediately.

It was a bizarre crime to say the least. The kidnapping was perpetrated by two old high school classmates who abducted the son of a living legend to make a quick buck. And not just any living legend – one who had famously tight connections with influential people from the Kennedys to the mob. Apparently “go big or go home” was their motto.

Barry Keenan and Joe Amsler, two 23-year-olds from Los Angeles, had been following Frank Sinatra Jr. around for several weeks. After a couple of bungled attempts, the pair decided to strike on December 8, 1963, when Sinatra was playing Harrah’s Club Lodge in Lake Tahoe.

The twosome showed up at the singer’s dressing room door around 9 p.m. pretending to make a delivery. Once inside, Keenan and Amsler brandished pistols. They tied up a friend of Sinatra’s who had the bad luck to be present and blindfolded their target, sneaking him out a side door. The pair managed to make their way past roadblocks and even an actual stop by police to their hideout in suburban L.A.

The F.B.I. was brought in at 9:40 p.m. Agents met separately with Frank Jr.’s parents and all parties assumed that the motive was financial. Sinatra was advised to wait for the inevitable ransom demand and the FBI could take it from there. They didn’t have to wait long.

The next night John Irwin, who was Keenan and Amsler’s ransom contact, placed a call to Sinatra Sr. demanding $240,000 for the return of his 19-year-old son. He handed the cash to the FBI who photographed it all. Per Irwin’s instructions, they made the drop on December 11th between two school buses in Sepulveda, California.

Keenan and Amsler picked up the dough and Irwin released Frank Sinatra Jr. in Bel Air. He was taken to his mother Nancy’s home after he told a security guard who he was. He told FBI agents what he knew, but it wasn’t much as he’d been blindfolded. But that was OK, because John Irwin told the entire story to his brother, who in turn shared every detail with the FBI in San Diego.

Just hours later, Keenan and Amsler were captured and the bulk of the ransom money was recovered. Some of it was traced back to a safety deposit box that Barry Keenan shared with his friend Dean Torrence of the singing duo Jan and Dean.

Torrence was called as witness during the trial and at first he testified that he knew nothing of his friend’s plans to abduct Frank Sinatra Jr. But he later changed his tune, but added that he never thought Barry would follow through with the scheme.

The defense contended that Frank Sinatra Jr. (other conspiracy theorists said Sr.) was behind the kidnapping plot as a way to garner publicity for Jr.’s fledgling career. Few bought this story, including the jury, and originally the co-conspirators were convicted and sentenced to life-plus-75 years. Through the appeals process, they all served much shorter sentences (Amsler and Irwin served three-and-a-half years while Keenan served four-and-a-half.)

As for Frank Jr., despite lack of evidence, for decades he had to deal with conspiracy theorists who were convinced that he really did set the whole thing up.