The First Person to Die in an Airplane Crash 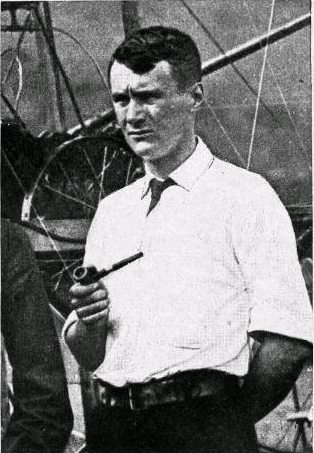 On Monday, December 14, 1903, the Wright brothers took the Wright Flyer out in their first attempt to fly it. The plane “flew” only for a few seconds, stalling when Wilbur pulled up too sharply as soon as the plane was in the air.

Three days later, after repairing the damage done to the craft, Orville took his turn at the controls and achieved a slightly more successful flight, though he too underestimated the elevator sensitivity, resulting in him flying in something of a sinusoidal pattern before crashing.  Before his “landing,” though, he managed to fly the plane for about 12 seconds and a distance of around 120 ft.

After minor repairs, the two took turns with the longest flight of the day lasting 59 seconds and covering 852 feet. Unfortunately, the Flyer was damaged after this flight. Before the two could repair it for future flights, a gust of wind came up and toppled the craft, damaging it beyond immediate repair (though it was many years later mostly repaired for display in museums).

Whether these constituted the real first manned, powered flights is up for debate.  Many people before this had developed successful gliders (including the Wright brothers), some developed successful powered craft (though not manned), and there are a few others with reasonably credible stories that claimed to have created and flown manned, powered aircraft before the Wright brothers.

Whether they were the first or not, what set the Wright brothers’ craft apart from many other claimants of the day was that their craft was not only powered and capable of carrying a person, but it was also fully controllable, and the three-axis system they developed to achieve this is not too dissimilar to the way planes are controlled today.

As for the Flyer II, it was more or less the same as the Flyer I except it was equipped with a more powerful motor and made from a different type of wood. This flew 105 times and the brothers were able to achieve flight times as much as five minutes long, often showing off their innovative control system via flying in full circles. With the Flyer III, they did even better, including one flight where Wilbur flew in circles for 39 minutes straight for a total distance of twenty-four miles on October 5, 1905.

By 1908, five years after they took their legendary powered flight, the Wright brothers were traveling all over the United States and Europe demonstrating their fabulous flying machine and taking various people up with them in the demonstrations. Everything went well-until September of that year. That was when Orville Wright was demonstrating their machine at Fort Myers, Virginia. At this time, the U.S. Army was interested in purchasing aircraft from the Wright brothers. It was the job of the younger Wright brother to show how safe and practical their plane was.

On September 10th, he took Lieutenant Frank D. Lahm with him on a flight. Two days later, Orville flew Major George O. Squier around for 9 minutes. These first two flights went swimmingly, but the next was a catastrophe. 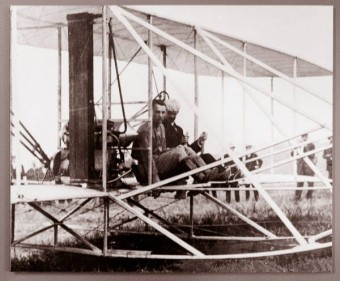 On September 17, 1908, Orville Wright took 26-year-old Lieutenant Thomas Selfridge up for another demonstration. A cheering crowd of an estimated 2,000 people gathered to witness the flight. Selfridge waved to the crowd as the plane took off.

Wright flew a few laps over the parade ground at approximately 150 feet without incident, but then disaster struck. In his own words,

On the fourth round, everything seemingly working much better and smoother than any former flight, I started on a larger circuit with less abrupt turns. It was on the very first slow turn that the trouble began. … A hurried glance behind revealed nothing wrong, but I decided to shut off the power and descend as soon as the machine could be faced in a direction where a landing could be made. This decision was hardly reached, in fact I suppose it was not over two or three seconds from the time the first taps were heard, until two big thumps, which gave the machine a terrible shaking, showed that something had broken. … The machine suddenly turned to the right and I immediately shut off the power. Quick as a flash, the machine turned down in front and started straight for the ground. Our course for 50 feet was within a very few degrees of the perpendicular. Lt. Selfridge up to this time had not uttered a word, though he took a hasty glance behind when the propeller broke and turned once or twice to look into my face, evidently to see what I thought of the situation. But when the machine turned head first for the ground, he exclaimed ‘Oh! Oh!’ in an almost inaudible voice.

Under normal circumstances, Orville may have been able to simply glide the plane in, but unfortunately the broken propeller struck the wire that was bracing the vertical rudder, which is what caused the sudden nose dive.  Wilbur did manage to recover some semblance of control in the end, but wasn’t able to land the plane normally, hitting the ground nose first and throwing the two passengers forward in the wreckage.  Unfortunately for Selfridge, in the process, his head struck a piece of the wood frame of the airplane, cracking his skull. 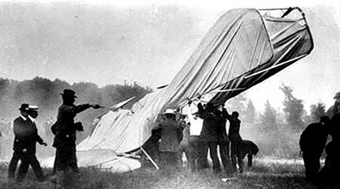 The pair were soon extracted from the wreckage and miraculously they were both still alive, though a bit bloodied up. But whereas Orville was still conscious, Selfridge was not. Both men were rushed to the nearby hospital on stretchers and Selfridge was quickly operated on. Despite this, he didn’t make it, with the official cause of death being listed as complications due to a fractured skull.

And so it was that Thomas Selfridge gained the dubious honor of being the first person to die in an airplane crash. He was subsequently buried with military honors at Arlington National Cemetery (which by the way has a surprisingly fascinating history).

It is generally thought that had he been wearing a helmet, he likely would have survived the crash as the rest of his injuries, while non-trivial, were not considered life-threatening. Because of his death, when the army started sending pilots up in planes, they required that they wear thick headgear for protection.

As for Orville, he escaped death, but did suffer a broken left leg, fractured and dislocated hip, several broken ribs, cuts on his head, and bruises all over his body. After about a month and a half in the hospital, he was released on October 31st. Although he was to walk and fly again, he did suffer pain from the fractures to his hip for the rest of his life, which turned out to be a long one.

While his brother, Wilbur, died just four years after this incident, in 1912, Orville made it all the way to 1948, getting a chance to see the airplane industry go from a couple of bike mechanics in an empty field to a form of transport that came to dominate long distance travel and became essential in various military exploits, the latter of which Orville was not at all happy about.  He stated after WWII,

We dared to hope we had invented something that would bring lasting peace to the earth. But we were wrong….No, I don’t have any regrets about my part in the invention of the airplane, though no one could deplore more than I do the destruction it has caused. I feel about the airplane much the same as I do in regard to fire. That is I regret all the terrible damage caused by fire, but I think it is good for the human race that someone discovered how to start fires and that we have learned how to put fire to thousands of important uses.