That Time Christmas was Banned in Boston 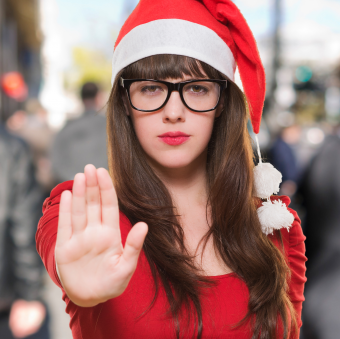 In fact, in 1620, the Puritans spent their first Christmas in the New World building their first structures. The next year, according to William Bradford’s Of Plymouth Plantation, an influx of new settlers caused some issues:

On the day called Christmas Day, the Governor called [the settlers] out to work as was usual. However, the most of this new company excused themselves and said it went against their consciences to work on that day. So the Governor told them that if they made it [a] matter of conscience, he would spare them till they were better informed; so he led away the rest and left them.

Of course, he later found this pro-Christmas crowd more or less partying in the streets, and so ordered them to remain in their homes for the duration of the day.

Needless to say, even with more and more settlers coming over time, for most in the region, Christmas was just another work day among many. In fact, the Puritan calendar notoriously was one of the least leisure friendly of any free people’s in the recorded history of humanity, with a little over 300 work days per year and another 52 to be dedicated to solemn worshiping of God. The balance of the few free days they got were generally spent giving thanks, often in non-festive ways, electing officials, days set aside for humiliation (fasting and prayer), and eventually Harvard’s commencement day. For those few non-Puritans who did celebrate Christmas in the region, they typically had to stay in their homes and keep their revelry orderly and quiet so as not to draw attention to what they were doing.

But then on May 11, 1659, any Christmas-related celebrating was made a criminal act in the area. The General Court for the Massachusetts Bay Colony ruled on that day that:

For preventing disorders arising in several places within this jurisdiction, by reason of some still observing such festivals, as were superstitiously kept in other countries, to the great dishonor of God and offense to others: It is therefore ordered by this Court and the authority thereof, that whosoever shall be found observing any such day as Christmas or the like, either by forbearing labour, feasting, or any other way upon any such account as aforesaid, every such person so offending, shall pay five shillings as a fine…

(And in case you were wondering “or the like” here also included banning Easter.)

You see, the Puritans noted that there was no historical basis for celebrating the birth of Christ on December 25th.  They also noted that, even if this was by some miracle the correct date (and not just originally the Church trying to usurp pagan holidays), there was no scriptural basis for the idea of the celebration, with God specifying only the Sabbath to be set aside specifically as a holy day dedicated to worshiping Him. Nowhere did it say the birth of Jesus should be given the same reverence. Finally, they noted that what people usually did on Christmas was not actually celebrate the birth of Christ in any meaningful way, but rather drink and eat excessively, and play various games, many of which the Puritans felt were sinful in nature.

Reverend Increase Mather (father of Cotton Mather, a key figure in the Salem Witch Trials) would later note of this in 1687, “The generality of Christmas-keepers observe that festival after such a manner as is highly dishonorable to the name of Christ. How few are there comparatively that spend those holidays (as they are called) after an holy manner. But they are consumed in Compotations, in Interludes, in playing at Cards, in Revellings, in excess of Wine, in mad Mirth.”

Basically, the Puritans deplored everything about the holiday.

Across the pond, King Charles didn’t think much of this banning, and referred to his far away subjects as “rebellious dogs.” He attempted to abolish the ban on Christmas in 1679, but it wasn’t until two years later that the Massachusetts General Court and the English appointed governor, Sir Edmund Andros, got around to repealing the law.  While he was at it, Andros also put an end to the ban the Puritans had placed on any festivities occurring on Saturday night.

Even so, most in the region ignored the change in the law and reserved their right to shun Christmas. Boston judge Samuel Sewall noted in his diary on Christmas Day, 1685: “Carts come to Town and Shops open as is usual. Some somehow observe the day; but are vexed, I believe, that the Body of the People profane it, and blessed be God no authority yet to Compell them to keep it.”

Even for non-Puritans in the area, it wasn’t until the mid-19th century that Christmas started to be celebrated with any behavior even remotely festive, so deep was the imprint left by this particular Puritan priggishness. In fact, all the way up to the year before President Ulysses S. Grant declared Christmas a national holiday (in 1870), if a public school student in Boston chose to miss school on December 25th for reasons of celebrating Christmas, he or she was subject to severe punishment, including and not limited to immediate expulsion from school.

However, things did finally start to lighten up on the Christmas front for Bostonians around this time.  As Henry Wadsworth Longfellow noted a little over a decade before Christmas became a national holiday in the United States, “We are in a transition state about Christmas here in New England. The old Puritan feeling prevents it from being a cheerful hearty holiday; though every year makes it more so.”