Why Does James Bond Like His Martinis Shaken, Not Stirred?

December 7, 2015 Melissa
David S. asks: Here’s one for you, why exactly does Bond, James Bond, like his Martinis shaken and not stirred? 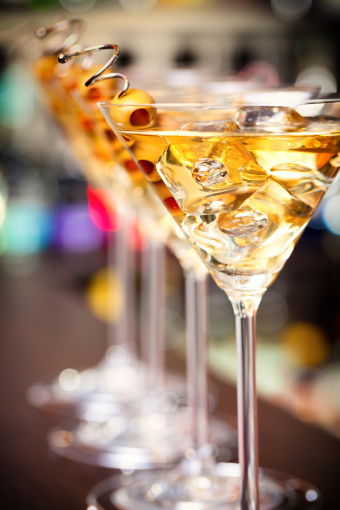 A properly made martini is mostly dry gin with a bit of dry vermouth and ice (Epicurious recommends 5 parts gin to 1 part vermouth). All three should be placed into a cocktail shaker, but rather than shaking, they should be stirred to combine the ingredients gently, and in fact, stirred with a wooden spoon rather than a metal one, to reduce impacting the drink’s temperature.

Shaking such a mixture would have several deleterious effects that would normally offend the sensibilities of a martini connoisseur: it would dilute the drink via melting more ice, make it cloudier via aeration (both aesthetically displeasing for otherwise clear drinks and affecting the texture), result in the drink being served much colder than normal, and would “bruise” the included gin via the dissolved air. In fact, shaking cocktails in general is only recommended for those drinks that are intended to be aerated and frothy, like a Tom Collins or a margarita. Others are either “built,” such as a highball where the ingredients are simply poured one on top of the other in the glass and served, or stirred, such as the martini or a Manhattan.

So why, precisely, would such a sophisticated man such as James Bond who has “impeccable mastery of culinary etiquette” repeatedly make the obvious faux pas of asking for his martinis shaken, not stirred?

One prominent theory is that he was consciously trying to lower the potency of his beverage, thereby giving the appearance of heavy drinking without actually doing so (which could lull his nemeses into a false sense of security while also assuring he kept his wits about him).

As noted, shaking the martini results in much more of the ice melting than with gentle stirring, ultimately diluting the drink and simultaneously making it colder, faster. The line in Casino Royale where he invents a drink of his own creation (Vesper) is often used as evidence to his preference of cold temperature.  In Chapter 7, Bond notes he wants:

“A dry martini… In a deep champagne goblet… Three measures of Gordon’s, one of vodka, half a measure of Kina Lillet. Shake it very well until it’s ice-cold, then add a large thin slice of lemon-peel. Got it?”

It has also been noted that Bond’s preference of including vodka necessitates the extra chill on the drink to “avoid having it taste like lighter fluid.” (Many martini connoisseurs would also argue that a vodka martini is no martini at all.)

Another theory notes that Ian Fleming (Bond’s creator) had switched to vodka martinis while writing the Bond novels, and perhaps some of his vodka was of an inferior quality. Sometimes cheaper vodkas (such as certain cheap potato vodkas) have a bit of excess oil in them and shaking the mixture to create the emulsion helps to hide that taste. Evidence to back this up is also found in Casino Royale where Bond notes that vodka from grain, rather than from potatoes, improves the taste of the drink.

The third, somewhat more humorous, theory is a bit more complicated to explain.

Not limited to whiskeys and martinis, Bond consumed a fair amount of wine, as well, including Liebfraumilch, Bordeaux, Chianti, Claret, Mouton Rothschild, Tattinger, and Dom Perignon.

In fact, Bond drank so much that in a (highly entertaining) December 2013 scientific report published in The BMJ (formerly The British Medical Journal), doctors opined that Bond was an alcoholic and headed for an early grave for this reason (if not due to his dangerous profession); or at the least he was likely to suffer from impotence, liver disease and a variety of other health problems associated with intemperance with respect to alcohol consumption. According to the researchers, who perused the James Bond novels for their data, over the 123.5 days covered in the stories they looked at, Bond consumed an astounding 9,201.2 grams of pure alcohol in the various drinks he partook in.

This means he drank an average of 521.6 grams of pure alcohol each week, an amount several times that recommended by the British National Health Service. They concluded their paper noting that “James Bond was unlikely to be able to stir his drinks, even if he would have wanted to, because of likely alcohol induced tremor.” Shaking his drinks would help hide this fact from his adversaries and further help hide that he was a high functioning alcoholic from his superiors.