Does Canadian Beer Really Contain More Alcohol Than Beer Made in the United States?

November 14, 2014 Melissa
Paul E. asks: Is it true that Canadian beer has a lot more alcohol in it than American beer? 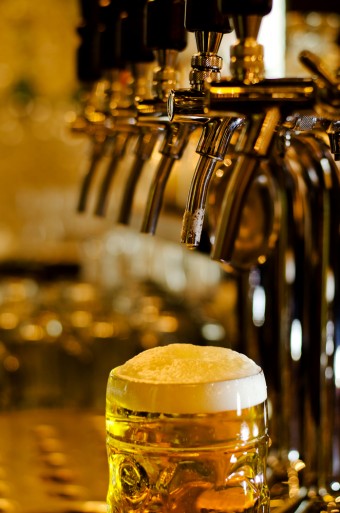 Canadians boast longer lives, safer communities, free nationalized healthcare, a cleaner environment, the most gold medals in Olympic hockey, and, of course, poutine. But, contrary to popular belief, one thing they don’t do any different than their friends to the south is make stronger beer.

When you’re dealing with mainstream beers, those with the highest alcohol are generally stouts, porters and pale ales, with alcohol by volume (ABV) contents typically ranging between 4% and 10%, though most mainstream beers tend to stay in the range of 4%-6%, such as Canada’s popular Labatt (5% ABV), which edges out the United States’ “favorite” brew, Bud Light (4.2% ABV).

However, some Americans prefer their beer with a little extra kick, and United States brewers have delivered. For instance, the kind people at Dogfish Head make the 120 Minute IPA with an ABV of 20%, while the evil geniuses at Sam Adams have created Utopias, a brew that boasts a whopping 27% ABV.

Of course, Canadian brewers are no slouches and their breweries have produced some hefty quaffs, too, including Trafalgar’s Critical Mass Double/Imperial IPA with its 17% ABV, and the aptly named but apparently discontinued Korruptor (ABV 16%).

As you can see from this, both nations boast brewers that make beers with a variety of alcohol levels, but there really is very little difference between the nations’ respective brewers when you average them all out. This, perhaps, should not come as a surprise as most would like to be able to drink several beers while socializing or watching sporting events, rather than become completely hammered off just one or two beers. As a result, the sweet spot for this type of recreational drinking tends to be in that 4%-6% ABV range favored by brewers the world over.

At this point, you might be wondering where the myth that Canadian beers contained significantly more alcohol than beers made in the United States came from. And, indeed, the U.S. also has the reputation among other nations of having weak beers, not just in comparison to Canada, despite the alcohol levels in reality being pretty similar on the whole to every other beer drinking nation in the world.  So what gives?

It is generally thought that this comes from the fact that Canada (and most everywhere else) lists the alcohol levels in their beers by the aforementioned alcohol by volume (ABV). As with many metrics, the United States initially bucked the trend and went with alcohol by weight (ABW)- the weight of the alcohol in a drink divided by the total weight.

The key thing to note here is that alcohol is lighter than water (about 0.79 g/cc at standard pressure and temperature vs. 1.0 g/cc of water).  The result is that the ABW in beers is going to be equal to roughly 4/5 of the ABV.

To illustrate, if you have a typical 12 ounce bottle of beer that is listed at a 5% ABV, 5% of that 12 ounces in the bottle is going to be alcohol. On the other hand, take that same bottle, but now list it by ABW and because alcohol weighs about 4/5 of water, by weight, it’s then only going to be about 4% of the total weight of the beer in the bottle. It’s the same amount of alcohol in the bottle, but if you don’t pay attention to whether it’s ABV or ABW, one looks like less than the other.