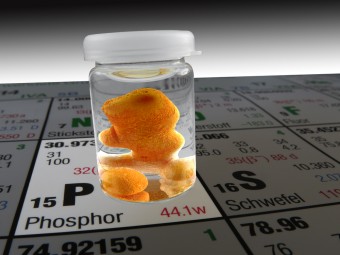 Phosphorus is an essential element for life. Forms of it are found in DNA, RNA, and all living cell membranes. It is the sixth most abundant element in any living organism. Phosphorus can also be highly poisonous and combustible (white phosphorus is used in many destructive weapons, such as napalm). It was also the first element discovered since ancient times. The person who made this discovery was Hennig Brand in 1669, who did so while he was playing around with large amounts of human urine.

Brand was born in 1630 into relative modest means in Hamburg, Germany. Not much is known of his early life, but it is believed he was a junior army officer during the Thirty Years’ War, likely right at the end of the war. After he left the army,  he became an apprentice glass-maker. He married well, to a woman whose dowry was rather substantial. In fact, he married so well that he was able to leave the world of glass making to pursue his true passion – searching for the “philosopher’s stone.” Yes, Brand quit his day job to become an alchemist.

As no doubt anyone who paid any attention at all in the “history” part of chemistry class or simply read or watched the first Harry Potter, knows, the philosopher’s stone is a legendary object/substance that was said to be capable of turning basic metals (lead, zinc, nickel, iron) into gold. It was also said that the philosopher’s stone could hold the key to the elixir of life, immortality, and eternal youth.

The discovery of it was pursued by many scientists throughout the Renaissance and Middle Ages, including ones that earned their stripes making real contributions to science. Roger Bacon (the scientific method), Robert Boyle (father of modern chemistry), and Isaac Newton (the Universal Law of Gravity, among other things) were among the scientists who more than dabbled in the field of alchemy.

Around this time, he began calling himself “Dr. Brand,” despite no record of him receiving a degree of any kind anywhere. Unfortunately, or rather fortunately for his finances, his first wife passed away and he married a wealthy widow named Margaretha. She gave Brand the financial means to build a lab to continue his work, and a child (she had a son from a previous marriage) to help him in the lab.

Brand was particularly interested in how water combined with other things and thought, since water was the basis of life, there must be mystical properties to it. Additionally, there was a belief that human bodies themselves may have held the key to alchemy. After all, things went into humans and came out something completely different. Brand found in an “alchemy cookbook, entitled “400 Auserlensene Chemische Process by F. T. Kessler of Strasbourg” written in 1630, a recipe calling for alum, potassium nitrate, and concentrated human urine. According to the recipe, this would turn basic metals into gold. Brand first used his own urine in his experiments, but it soon became clear he would need more of it. Much more.

It isn’t precisely known where he acquired the vast amounts of human urine he is thought to have used. Some claim he initially took it from his wife and her friends. Others claim he approached the German Army and requested to collect the soldiers’ urine. It was also said that he was especially interested in beer drinkers’ urine, because it had a “yellow hue to it.” In the end, it is thought that he collected upwards of 1500 gallons of urine over the course of his experiments. Whether those specifics are true or not, Brand did collect vats of human urine and began his attempts to turn the golden liquid into literal gold.

While the exact method used by Brand is slightly up for debate, it is generally thought he first let the urine sit in the sun for several weeks, because, alchemy… He then boiled the now rancid liquid until it was a thick, syrup-like substance. This was heated until a red oil formed at the top, which he extracted. Next, he had the substance sit in his cellar to cool until it turned black, with a salty lower layer which was discarded. He then mixed the black part with the red-oil and heated it.  Finally, he distilled it through a retort. What filled the glass chamber was glowing fumes that turned into a shining, white liquid as it dripped out of the retort. As soon as it did that, and upon contact with oxygen, it produced flames and gave off a “garlic-like” smell. As written by John Emsley in his book “The 13th Element,”

When he caught the liquid in a glass vessel and stoppered it he saw that it solidified but continued to gleam with an eerie pale-green light and waves of flames seemed to lick its surface. Fascinated, he watched it more closely, expecting this curious cold fire to go out, but it continued to shine undiminished hour after hour. Here was magic indeed. Here was phosphorus.

While Brand had discovered phosphorus (specifically white phosphorus, which is highly flammable and self-igniting when exposed to oxygen), he didn’t know this. Indeed, he thought he had discovered the philosopher’s stone. He named it after the Greek phosphorus (“morning star,” a Greek name for Venus), which derived from “phos,” meaning “light,” and “phoros,” meaning “bearer” – “light bearer.” He told no one of his discovery for six years, for fear it would be stolen from him or would perhaps put him in danger.

He continued to experiment with it, learning that it could be stored in water, but when exposed to air it would glow and, occasionally, burst into flames. He used the light it gave off to read his alchemy texts. He even used it to create glow-in-the-dark ink. The one thing he couldn’t do with it was turn basic metals into gold.

After six years, Brand finally accepted that he’d not created the philosopher’s stone, but something completely different, something unknown. Whatever it was, Brand had little use for it. He was also broke, having gone through his second wife’s money, just like he did with his first wife. Upon hearing the rumors of this “new material that far outshone any others,” chemist Johann Kunckel visited Brand and asked to purchase all of his phosphorus and any more he made. (Brand was still being secretive on how he produced it.)

Soon, word got out to other chemists, including to Daniel Kraft, and Brand had a bidding war on his hands for the method of how to make the substance. Eventually, he spilled the beans on his human urine recipe and others began to replicate, and go further with, his experiments. Brand faded into obscurity as other chemists, including Kunckel, Kraft, and Robert Boyle were popularly thought of as the discoverers of phosphorus.

Brand died in the early 18th century (the exact date isn’t known) not being given proper credit for his discovery. Luckily, for him, letters found from his second wife, Margherita, and acquaintances finally resulted in Brand getting his due, but well after his death.

Next time you have to take a bathroom break, think for a moment that thanks to playing with pee, a man became the first person since ancient times to discover an element.