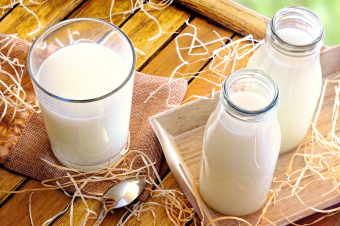 In 1993, concerned about the steady decline of milk consumption over recent years, the newly created nonprofit California Milk Processor Board approached the advertising agency of Goodby, Silverstein & Partners, seeking fresh ideas to get America excited about drinking their product.

The agency found the request quite a challenge, since, in the words of Jeff Goodby: “We have all tried it. Most of already own some.. . . Milk is not new. It is not improved . . . . There is very little to say about it.”

And so, despite years of experience, the Mad Men and Women of Goodby, Silverstein & Partners were at a loss for where to start when, during a focus group, one woman noted that: “The only time I even think about milk is when I run out of it,” which led Goodby to write down the now famous line- “got milk?”

Still not convinced they had their winner, some members of the firm were concerned that not only was the phrase grammatically questionable, its production hadn’t required much effort on their part- it seemed too simplistic to present back to the Milk Processor Board. Others thought that the campaign should instead recognize that people almost always drink milk with other foods, like cookies or cereal, and wanted the ads to focus on “Milk and XYZ”

Ultimately however, perhaps recognizing that brevity can be the soul of wit, they stuck with the two-word question, with the minuscule case set it in its now iconic typeface, and began telling stories of how much life can suck when you run out of milk.

Generally involving an individual caught in the middle of eating something sticky or dry when he realizes he’s out of milk, the commercials typically ended with the distraught character looking pathetic, and a narrator asking you if you are sufficiently prepared to avoid this type of calamity with the simple question: “got milk?”

While many of the commercials are classic, none is more well known than the first in the series, which was directed by none other than Michael Bay of Transformers, Bad Boys and Armageddon fame.

Sometimes called “Got Milk/Aaron Burr,” for those not familiar, the television ad opens with classical music playing while the camera scans a large apartment, crammed full with Alexander Hamilton memorabilia. As the song wraps up, the sole occupant of the apartment finishes spreading peanut butter on a slice of bread and takes an enormous bite, just as the announcer says that the day’s $10,000 question is: “Who shot Alexander Hamilton in that famous duel?”

Now several shots of Hamilton/Burr collectibles are shown, revealing that the answer was not only “Aaron Burr,” but that the peanut butter-eating character knows this, as well. The phone rings, the announcer asks our character the question and he answers, but, because of the peanut butter gumming up his mouth, his answer is unintelligible. As his big chance slips away, the character goes for a glass of milk to clear his palate, only to realize the carton is empty. The announcer cuts the call having not heard the correct answer, and as the screen fades to black, the character, now broken-hearted, continues to try to articulate the answer to no avail, and then his apartment dramatically explodes… (kidding) The commercial ends with the familiar phrase on the screen, “got milk?”

Wildly popular, Bay’s commercial won the Silver Lion at Cannes, as well as the Grand Prix Clio for commercial of the year. Within two years, the Milk Processor Education Program (MilkPEP) was distributing it nationwide and by the mid-1990s, more than 91% of American adults were familiar with the “got milk?” campaign (which eventually morphed into other forms, such as with milk-mustachioed celebrities in a variety of poses).

Despite the cleverness and popularity of the entire campaign, milk consumption in the U.S. has continued to decline somewhat. For reference, in 1975 Americans annually used 274 pounds per person of liquid milk (about 32 gallons), while in 2014, they were only using 159 pounds per person per year (about 18.5 gallons). Seeking to stop the bleeding, in 2014, MilkPEP dropped the got milk? campaign and replaced it with one focusing on milk’s rich nutritional content, and in particular, protein, called Milk Life.

As for Bay, before his big break into feature films with 1995’s Bad Boys, he made a number of other well-known commercials, as well as music videos. For instance, in addition to the award-winning 1993 “Got Milk/Aaron Burr” ad, Bay received the Gold Lion at Cannes the same year for the “Miller Lite/Lawyer Roundup” commercial. Other famous Bay commercials include Nike’s “Michael Jordan vs. Charles Barkley” ad and a couple of jean commercials – one for Levi’s, the other for Bugle Boy. For his efforts here, Bay received the Commercial Director of the Year award from the Directors Guild of America in 1995. Among Bay’s well-known music videos are Meatloaf’s “I Would Do Anything for Love (But I Won’t Do That),” Wilson Philips’ “You Won’t See Me Cry,” and the Divinyls, “I Touch Myself.”