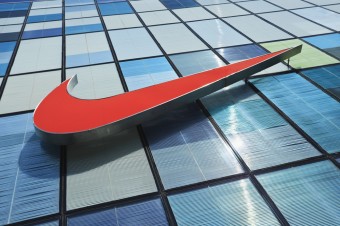 Today I found out the creator of the Nike “swoosh” logo was originally only paid $35 for it.

The woman is Carolyn Davidson. At the time she created the now world famous logo, Davidson was a student at Portland State University where one of the co-founders of Nike,  Phil Knight, was teaching as an assistant professor in accounting.  On the side, Knight ran a business called Blue Ribbon Sports, the precursor to Nike. (Blue Ribbon Sports primarily was a distributor of Onitsuka Tiger shoes from Japan.)

It was simply by chance that Davidson met Knight at all.  She was in the middle of a conversation with a fellow student in the graphics design department explaining that she didn’t have enough money to take an oil painting class.  Knight overheard and later approached her and asked her if she’d be interested in doing some graphics work for his business, offering her $2 an hour for the gig (about $14 per hour today).

Davidson accepted and began doing various freelance jobs for Blue Ribbon Sports, mostly making charts and things of this nature.  A few years later, Knight decided it was time to take his business to the next level, moving away from being just a U.S. distributor of Japanese running shoes and, rather, producing and selling his own shoe lines.

Thus, in 1971, Knight asked Davidson to design a “stripe”, which was the slang term at the time for a logo for a shoe.  He further instructed her that he wanted it to give the impression of motion.  Knight was particularly fond of the Adidas logo, and though he said it couldn’t look too similar to that, he was apparently enamored by it.  As Davidson said,

Oh, he loved Adidas. That was part of my problem. He loved the Adidas stripes, he loved them. Well, when you really love something, try to get somebody to look over here at something different.

Davidson doodled for nearly three weeks, estimating she worked well over the 17.5 hours often touted, to come up with the logo.  Her process was to draw “a picture of a shoe and then I drew (logos) on tissue. I’d lay it over. And then I’d [crumple it up] because it has to look good on a shoe.”

Finally, with a deadline looming, Davidson presented five or six designs for Knight, Jeff Johnson (who would later suggest the name “Nike” for the brand), and Bob Woodell to look over. (She can’t remember the exact number of logos she presented, nor does anyone remember the exact date it was created.) Knight’s response was underwhelming. The first design he looked at was the “swoosh”, he then passed it up and looked at the rest, than came back to it and said the words every designer longs to hear, “I don’t love it, but I think it will grow on me.”

Somewhat disappointed at his reaction, Davidson asked for time to perfect the design, but Knight said no.  She then submitted her invoice of $35 (about $195 today).

One might think she was ripped off for the work, considering the logo she created went on to become one of the most well known in the world.  However, Davidson didn’t see it this way as she was happy with the wages at the time and had agreed to make the logo for that amount, so fair’s fair.  The fact that it became world famous was simply a nice feather in her cap.

However, this is not the end of the tale.  For starters, after leaving Nike in 1975 (she had been given a job there after graduating from college in 1971) she went on to freelance and being the designer of the Nike logo certainly helped her acquire clients over the years.

A more direct benefit happened in 1983, a few years after the company went public. Knight decided to honor Davidson for having created the company’s logo and for her early work with Nike, so invited her to lunch, which actually turned out to be a surprise party in her honor.  At the party, he gave her a gold ring that had the swoosh on the top with a diamond in it.  But this wasn’t the big payoff.  He also gave her, according to Davidson, 500 shares of the company.

So how much were 500 shares of Nike worth at the time? Around $8000 or about $18,000 today.  Quite a sum given Knight was not obligated to give her anything, nor was there any pressure to do so.  But this wasn’t the end of it.  Davidson never cashed out those 500 shares of Nike stock.  Since that time, there have been four instances where the stock has been split, meaning today those 500 shares are now 8000 shares.  At the current stock price of a little over $60 per share, the $8,000 gift of stock in 1983 is now worth just shy of a half a million dollars.  Not too bad for producing something in a couple weeks of part time work that is essentially just a curvy checkmark. 😉