Why Didn’t Chewbacca Get a Medal in Star Wars?

October 2, 2015 Karl Smallwood
Kyle S. asks: Why didn’t Chewie get a medal at the end of the original Star Wars movie? 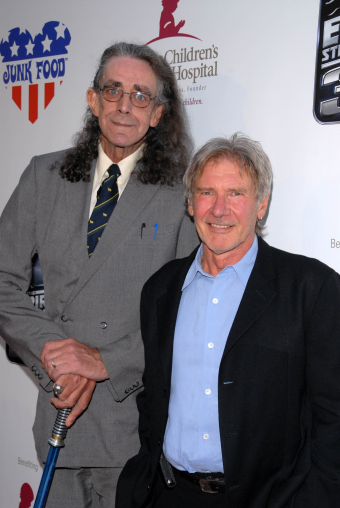 For years fans of the Star Wars franchise have expressed frustration with the fact that Chewbacca didn’t get a medal at the close of Star Wars: A New Hope despite playing a pivotal role in the destruction of the Death Star. Since then, George Lucas constantly meddled with his films, but stopped short of giving a CGI medal to Chewbacca and instead decided that Greedo apparently had the worst aim in the galaxy… But why didn’t Chewbacca get a medal in the first place?

To begin with, there’s currently no canonical explanation for why the lovable Kashyyyk wasn’t rewarded for his bravery when his co-pilot was. This is because after Disney gained ownership of the Star Wars franchise, they decided to delete from canon the entire Expanded Universe so that you don’t get to know ahead of time what’s going to happen in the upcoming films and their writers aren’t bound to storylines in the numerous comics, video games and books released by Lucasfilm over the years. (It also no doubt helped that this way they can make a whole lot more money by rebooting the entire thing with many new books and other media based on the upcoming films coming soon to a store near you ;-)). While the old Expanded Universe certainly could use a little house cleaning (with Lucas having been notoriously lax at policing inconsistencies in it), this is a little unfortunate as particularly Heir to the Empire, Dark Force Rising, and The Last Command (the first of which set five years after Return of the Jedi) are awesome and would have been amazing to see on the big screen in some form or another. Ah well…

In any event, as a result of all this, the current official canon of Star Wars is limited to that established by the core six films (despite the issues with I-III), The Clone Wars TV show and any games, movies or books that are going to be released by Disney in the future.

While Disney has acknowledged that its writers are free to take inspiration from the Expanded Universe, they’re also free to ignore it to come up with their own ideas, so long as it doesn’t contradict the canon Disney establishes from here on out. Meaning, Chewbacca never got a medal, Boba Fett never escaped the Sarlaac pit and Darth Vader’s glove never went on a planet hopping adventure after Luke cut off his hand. But since we never pass up an opportunity to delve into the Star Wars Universe, we may as well thumb our noses at Disney’s decree and dig deeper into the saga of Chewie’s lack of a medal.

For this, we must go back to the beginning… A long time ago in a galaxy far, far too full of terrycloth jumpsuits, George Lucas gave an interview recorded just a few weeks after the release of A New Hope; when asked why Chewbacca got stiffed on the medal front, Lucas explained that the Wookiee people “do not care for medals” and as a result, Chewbacca simply didn’t want it.

This is strange, because according to the film’s novelization which was released six months before the film and was supposedly written by George Lucas, Chewbacca did get a medal during the award ceremony. As it turns out, the book was actually written by a ghostwriter called Alan Dean Foster, who based the majority of the novel on Lucas’ original screenplay where Chewbacca was awarded a medal for his part in destroying the Death Star, meaning it was initially Lucas’ intention for him to get one: [Draft from May of 1974]

Queen Leia, in all her grandeur, sits on the magnificent throne of Aquilae. Starkiller and the general stand to her right.  Several old advisors stand to her left.  Han presents Chewbacca and a delegation of Wookees with a treaty, gifts, and a medal of honor.  They bow and exit.  Han moves to one side of the crowded court.

Exactly why Lucas decided to make this change during his many revisions of the script isn’t clear, because he eventually went back on his explanation that Wookiees don’t place value in tangible rewards in a later interview with the Official Star Wars Fan Club, instead claiming that Chewbacca did get a medal in a small ceremony after the one seen in the film. Lucas explained that because Princess Leia was so much shorter than Chewbacca, who is canonically stated to be 7 feet 6 inches tall (3 inches taller than Peter Mayhew, the actor who physically portrays him), she couldn’t place the medal around the Wookiee’s neck. 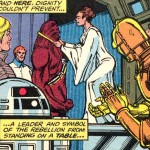 This explanation was expanded upon in the 1980 comic, The Day after the Death Star! In it, Chewbacca is given a medal by Princess Leia in a small private ceremony, with Leia having to stand on a table so that she can reach him comfortably. (Although, why he couldn’t just bend down is anybody’s guess.) The comic also alludes to Lucas’ earlier assertion that Wookiees don’t place value in material rewards by showing that Chewbacca initially refuses the medal, only changing his mind at the behest of Han Solo, thus explaining why he was awarded it the day afterward.

But even if you reject such works that are no longer part of canon, Chewbacca was (kind of) awarded a medal some two decades after the original film during the 1997 MTV movie awards. At this award ceremony, he won a “Lifetime Achievement Award” which was intentionally styled to look exactly like a Medal of Bravery from the film and was presented to him by none other than Princess Leia (aka Carrie Fisher). While not exactly canon, the award was largely seen as a tongue in cheek way of addressing one of the major fan complaints about the original trilogy and was supported by Lucasfilm who provided Mayhew with a copy of his costume to wear on stage. Upon receiving the award, Chewbacca addressed the crowd and uttered a few shorts words of appreciation before being given a rousing round of applause.

In the end, while he may have been slighted in A New Hope, as Chewbacca himself (Peter Mayhew) noted, Chewie did get the last word in the film- Rrrr-ghghghrrrr!