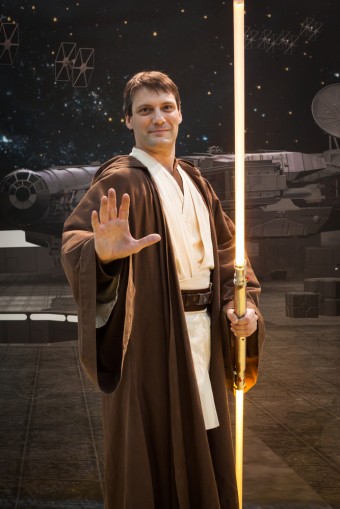 No one can dispute George Lucas’ significant contributions to cinema history, including both the Star Wars and Indiana Jones franchises. His company also played a role in advancing special effects, top quality post-production audio and even digital sound systems for movie theaters. But it is nice to know that he didn’t invent everything out of whole cloth; when developing the Star Wars movies, he was hugely influenced from the work of Japanese director Akira Kurosawa, among others.

A titan of Japanese cinema, Kurosawa was heavily influenced by western literature and movies. Marrying what otherwise can appear to be disparate cultures, Kurosawa directed movie remakes of western classics including Throne of Blood (MacBeth) and Ran (King Lear). His distinct style, however, incorporated traditional Japanese culture, including tragic ladies, scheming lords, arrogant samurai and lone rōnin (rogue samurai who could only find work as mercenaries and bodyguards).

Among the most dominant of these influences were the period dramas (historical stories with elaborate costumes and sets) known as “Westerns,” and in particular the stunning visual work of director John Ford. This imagery he so admired (and borrowed) included the lonely street, the frontier town (with villagers peeking from behind closed doors), the meeting of two men to fight to the death, and the anti-hero who overcomes incredibly bad odds.

In an example of the student becoming the master, Kurosawa began to influence American filmmakers in the 1960s. So much so, that two of his movies were actually remade for western audiences: The Seven Samurai as The Magnificent Seven in 1960, and Yojimbo as A Fistful of Dollars in 1964.

A favorite among film students, a young George Lucas was a fan of Kurosawa’s period dramas (which in Japan are called JIdaigeki – pronounced “je – dī – ge – kē). Get it? “Jedi.”

Among the most influential of Kurosawa’s films on Star Wars was 1958’s The Hidden Fortress. The premise of the story, as Jesus Diaz notes in his excellent video, was: “two arguing peasants who help an outlaw princess and a samurai mentor escape the clutches of enemy imperial forces.” As Jesus says it, “Tell me if this doesn’t sound familiar to you.”

Other Kurosawa influences are also seen, including the resemblance between the imperial armor (think Darth Vader and Storm Troopers) and samurai garb, Master Yoda’s striking similarity (other than in height) to the character Kambei Shimada from Seven Samurai, and the famous cantina scene from Episode IV and a scene from Yojimbo.

And, of course, light saber battles and samurai sword fights.

According to Eric Nash, Lucas derived his names from a variety of sources. He played with a few Dutch words to approximate a name that means “Dark Father” for Darth Vader, and Luke (resembling the Greek leukos meaning light) is supposed to represent the opposite.

Princess Leia’s name is an homage to Princess Deja of Edgar Rice Burroughs’ classic John Carter stories, and her last name, Organa, is supposed to reflect a conflict between nature and tech, or simple people and the evil, mechanized Empire (think: Vader).

Han Solo’s last name is a no-brainer (the lone rōnin), although it is also to be an homage to Napolean Solo of The Man from U.N.C.L.E.

Obi-Wan Kenobi’s first name evokes the obi or kimono sash and is intended to connote his martial arts mastery.

R2D2 was the shorthand used in the making of American Graffiti for “Reel Two, Dialogue Two,” and Chewbacca is supposed to have been inspired by Lucas’ malamute named Indiana (?!?).

Notably, and contrary to Diaz’ theory, Nash believes Jedi is derived from Jed or Jeddak, the lords of Edgar Rice Burroughs’ Barsoom series. Barsoom is said to also be the inspiration for the name of banthas.

The Sand People are intended to resemble the Fremen of Frank Herbert’s Dune.

Tatooine is derived from Tatouine, Tunisia, where many desert scenes were filmed, and the name for the Ewoks (from Episode VI) is based on the name of a California Native American tribe, the Miwok.

The character played by Harrison Ford in American Graffiti, Bob Falfa, is said to be the inspiration for the name Boba Fett.