The Story of the Fascinating Legume 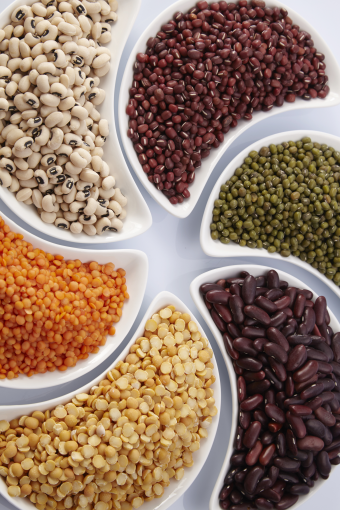 BEAN THERE, DONE THAT

What exactly is a legume? Most people would probably answer that a legume is a bean. And they’d be right—but that’s just one part of the legume story. To be precise, a legume is a plant in the botanical family Leguminosae (also known as Fabaceae). That family includes what we commonly call beans—such as kidney, soy, lima, garbanzo, green, and wax beans—as well as many related plants, like peas and peanuts, and a few you probably didn’t know were legumes—such as alfalfa, clover, and lupins. They are a remarkable family of plants for many reasons, including the fact that they are right up there with the grasses in importance to humans—not just as a food source, but in the birth and advancement of civilization.

LEGUMES AROUND THE WORLD

Legumes are the third-largest family of flowering land plants on Earth, with almost 20,000 different species. They’re found in a broad array of ecosystems, from desert to plain to high alpine, and in every region of the planet except Antarctica. They vary greatly in form. Some are trees. Koompassia excelsa, also known as the tualang tree, grows in Southeast Asian rainforests, and is one of the tallest tree species in the world, growing to more than 280 feet high. It’s a legume. And Brazilian rosewood, a fancy hardwood commonly used to make musical instruments. That’s a legume, too. Legumes also grow as shrubs, vines, and small annual herbs, but with a few exceptions, they all have one thing in common: their fruit. Legumes grow fruit in “pods”—capsules with seams along either side that allow the pod to split in two, and in which the plants’ seeds are contained.

A LEGUME, LEGUME TIME AGO…

Scientific studies of plant genetics and fossil records indicate that the first legume species appeared around 59 million years ago, breaking away from its flowering-plant ancestors by acquiring the genetic traits that made it unique. This happened in Africa—although that’s far from certain. Wherever it occurred, legumes rapidly spread around the world, acquiring more and more specifically legume characteristics along the way, while diversifying into the tremendous number of species that exist today.

One of the characteristics that make legumes unique in the plant world: They have a special way of obtaining nitrogen, which, as an essential building-block of proteins, all plants (and animals, for that matter) need to survive.

Most of the air around us is made up of nitrogen, but neither plants nor animals can get it that way. Animals obtain it from the food they eat; plants get it from naturally-occurring sources in the soil via the moisture they absorb with their roots. But legumes cheat.

There is a type of soil-borne bacterium known as rhizobia. And while plants can’t absorb nitrogen from the air, rhizobia can, and that’s the basis of the symbiotic relationship between the two species. Legumes secrete substances into the soil called flavonoids… which attract rhizobia bacteria. The bacteria in turn release substances that induce the legumes to form bulbous nodules on their roots, and those nodules become the homes of rhizobia colonies.

You can actually see the nodules on legume roots. Check it out next time you’re transplanting a bean plant. The nodules kind of look like little tumors growing on the roots. The plants supply sugars and minerals to the bacteria, and in exchange, the rhizobia absorbs nitrogen from the air around the nodules (yes, there is air in soil), and converts it into ammonia—or NH3—which it secretes into the plants’ roots. The legumes are then able to take the nitrogen from that NH3 and use it to build essential proteins.

This amazing nitrogen-cheating technique is one of the chief reasons legumes became such a successful family of plants—and it’s also the reason they’re so high in protein. Not all legume species have this nitrogen-friendly-bacteria relationship, but most do. There are also a relatively small number of non-legume plants that are able to do this, too. But among the nearly nine million plant species in the world, this is chiefly a legume feature.

Imagine you’re an ancient hunter-gatherer at the dawn of civilization, roaming the wild countryside with a small clan of friends and relatives, constantly on the move, looking for wild game, nuts, berries, roots, and whatever else you can find to eat. Then one day, someone says, “Hey, why don’t we grow some beans and store them up so that we can stay in one place and not have to run ourselves ragged all the time?”

That’s pretty much what happened to humans, beginning around 12,000 years ago, when people first started cultivating crops. Around the same time, people built the first granaries—structures designed to store dried foods such as grains and beans. These developments led, for the first time in human history, to the storage of food surpluses, which in turn led to the establishment of the world’s first permanent settlements.

Edible legumes are still staple foods all over the planet, and today account for roughly one quarter of all agricultural production worldwide. They also account for about a third of human dietary nitrogen needs.

Another fascinating feature: Legumes actually nourish the soil. As we said, most plant species get their nitrogen from natural sources in the soil, while legumes get it from the atmosphere via their special relationship with bacteria. That means that legumes don’t deplete the soil of nitrogen, as other plants do, which is one of the chief reasons farmers regularly rotate crops. After a season or more of a nitrogen-depleting crop such as corn, farmers will plant legumes and after harvesting, plow the legumes back into the soil, allowing the nitrogen-rich plants to revitalize that soil.

Legumes have a lot of non-food uses, too. Some leguminous trees are harvested for their lumber; the sap of the acacia tree—also a legume—is used to make gum arabic, which is used in the production of a many products, including paint, ink, glue, and cosmetics. And just a short list of the things made from soybeans (besides soy sauce, tofu, and tempeh) includes industrial adhesives (used to make plywood), biodiesel fuels, lubricants, hydraulic fluids, ink, crayons, and foams—like those used in automobile seats.

Legumes are so much a part of modern human existence that the world would, without question, be a very different place without them. In fact, if we didn’t have legumes, it would be like we’d never bean here at all!