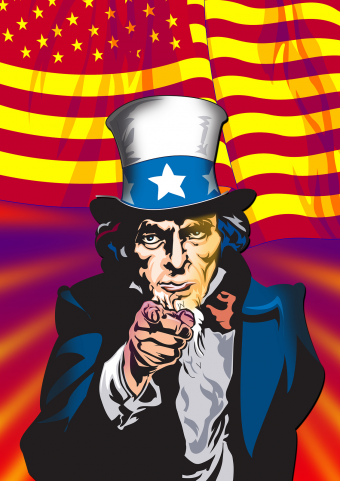 On September 7, 1813, the Troy Post in New York published an article on the War of 1812 that contained an early reference to “Uncle Sam” as the personification of the United States of America:

“Loss upon loss, and no ill luck stir[r]ing but what lights upon Uncle Sam‘s* shoulders, exclaim the Government editors in every part of the country. (…)

*This cant name for our government has got almost as current as ‘John Bull.’ The letters U. S. on the government waggons, &c., are supposed to have given rise to it.”

Two weeks later, a newspaper in Burlington, VT reported the need for volunteers to protect private property from the British troops, as there was a shortage of enlisted men because: “Uncle Sam, the now popular explication of the U.S. does not pay well…”

After the war ended, a political satire written in 1916 by Connecticut’s Seth Richards (writing as “Frederick Augustus Fidfaddy”) called The Adventures of Uncle Sam in Search After His Lost Honor, unequivocally denotes Uncle Sam as the physical embodiment of the U.S.

Decidedly anti-war in sentiment, the book portrays Uncle Sam as a bit foolhardy, full of hot air, and overconfident of his ability to defeat any adversary. He also refuses to face the consequences of his arrogance or deal with the financial fallout of the War of 1812.

But Uncle Sam also (supposedly) had a real-life inspiration. During the war, a businessman named Samuel Wilson from Troy, New York, had been contracted by the armed forces to supply the troops with meat rations. His company shipped out barrels stamped with the letters “US” to indicate them as property of the United States government.

Legend has it the local workers loading these barrels on delivery wagons didn’t know what the “US” markings stood for, but joked it must have meant “Uncle Sam,” as the well-liked and friendly Samuel Wilson was known. This story didn’t gather steam until well after his death in 1854. It wasn’t long before, whether true or not (read: probably not, see Barry Popik’s research on this), it was accepted as fact that Mr. Wilson was the origin of the nickname.

The grandson of a Revolutionary War veteran, “Uncle Sam” Samuel Wilson was born in Massachusetts, grew up in New Hampshire, and walked to his home in New York, where he was one of the first settlers of Troy. Despite the fact that he may well not have really been the original inspiration for “Uncle Sam”, that didn’t stop his hometown of Arlington, MA from erecting a statue adorning him with a top hat and Sam-esque duds. Nor did it sway Troy from building a memorial park in his name.

Congress has also given Samuel Wilson the nod as the origin of the U.S. moniker. The following resolution was adopted on September 15, 1961, “Resolved by the Senate and the House of Representatives that the Congress salutes Uncle Sam Wilson of Troy, New York, as the progenitor of America’s National symbol of Uncle Sam.”

If you liked this article, you might also enjoy our new popular podcast, The BrainFood Show (iTunes, Spotify, Google Play Music, Feed), as well as:.