This Day in History: September 23rd- A Moment in Time 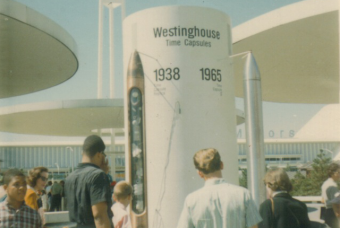 TIME CAPSULE OF CUPALOY, DEPOSITED ON THE SITE OF THE NEW YORK WORLD’S FAIR ON SEPTEMBER 23,1938, BY THE WESTINGHOUSE ELECTRIC & MANUFACTURING COMPANY. IF ANYONE SHOULD COME UPON THIS CAPSULE BEFORE THE YEAR A. D. 6939 LET HIM NOT WANTONLY DISTURB IT, FOR TO DO SO WOULD BE TO DEPRIVE THE PEOPLE OF THAT ERA OF THE LEGACY HERE LEFT THEM. CHERISH IT THEREFORE IN A SAFE PLACE.

On September 23, 1938, on the site of the Westinghouse Electric & Manufacturing Company exhibit of the 1939-40 New York World’s Fair, a massive 800 pound tube was buried 50-feet deep in the ground. Inside the tube were numerous items familiar in any contemporary household.

A booklet published by Westinghouse explained the purpose of the project:

Five thousand years from now the peoples of the future will look back upon us as we look back on the early Egyptians, Sumerians and Babylonians. It was the plan of Westinghouse engineers to provide them with more knowledge of us than we have of any of the ancient peoples who lived before us.

It was a noble goal, but also had a more immediate purpose. As the country was fighting its way out of the Great Depression, it was a perfect time to look to the future with hope and optimism. This played into the “World of Tomorrow” theme of the 1939-1940 World’s Fair perfectly. The idea of human beings 5,000 years in the future opening the time capsule captured the imagination of most everyone.

The contents of the time capsule included “materials and information touching upon all the principal categories of our thought, activity, and accomplishment; sparing nothing, neither our wisdom nor our foolishness, our supreme achievements nor our recognized weaknesses.”

In conjunction with creating the capsule, three thousand copies of something known as the Book of Record were made listing such things as how to locate the capsule and also how to determine when it’s time to open it, in case all contemporary major methods of keeping track of what year it is have gone the way of the Dodo (see: Why Did the Dodo Go Extinct?) with nobody remembering how long ago “1939” is when it is time to open the capsule.

Those involved with the project accomplished this by giving the precise alignment of the planets in our solar system on zero hour of January 1, 1939, referencing two eclipses on the Sun and Moon to occur in 1939, and noting the mean position of the North Star on January 1.  They then note that, “In the opinion of our astronomers, such a combination of astronomical events is unlikely to recur for many thousands of years. By computing backward from their time, people of the future will therefore be able to determine the number of years that have elapsed since our time.”

In determining the contents of the capsule, they even accounted for such things as the English language being lost, or otherwise unreadable in its present form to future generations, giving a key to English, among other such tools to translate the language.

These many copies of the Book of Record were distributed to museums, libraries and monasteries throughout the world, so knowledge of the existence of the capsule would not be forgotten

The book concluded with this statement:

Each age considers itself the pinnacle & final triumph above all eras that have gone before. In our time many believe that the human race has reached the ultimate in material and social development; others, that humanity shall march onward to achievements splendid beyond the imagination of this day, to new worlds of human wealth, power, life, and happiness. We choose, with the latter, to believe that men will solve the problems of the world, that the human race will triumph over its limitations and its adversities, that the future will be glorious.

TO THE PEOPLE OF THAT FUTURE

WE LEAVE THIS LEGACY