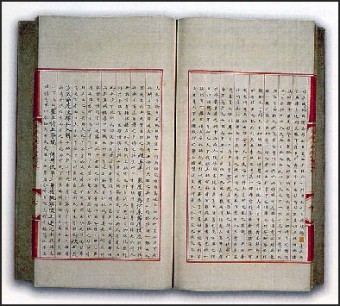 Today I found out about an encyclopedia finished in 1408 that contained nearly one million pages.  This particular encyclopedia was called the “永樂大典”, which translates to “The Great Canon of the Yongle Era”; today it’s  just called, in English, the “Yongle Encyclopedia”.  This encyclopedia was originally commissioned by Emperor Yongle of the Ming Dynasty in China.  It was not only the largest written encyclopedia in history, but was also one of the first.  It held the record for the largest overall encyclopedia in the history of the world (written or not) until September 9, 2007 when Wikipedia surpassed it.  At that point, Wikipedia had about two million articles.

As impressive a project as Wikipedia is, I think we can all agree that writing out by hand about one million pages of Chinese text, with most of the information needing to be gathered from all across China in the 1400s, is probably more impressive as far as the scope of the project.  Don’t think so?  Consider that the finished version of the encyclopedia is estimated to have weighed about 40 tons and took up about 1400 cubic feet of space.  It also comprised 22,937 chapters in 11,095 volumes and 917,480 pages.  This encyclopedia also included many thousands of immaculate hand drawn illustrations.   Most impressive of all was that it used over 370 million Chinese characters from start to finish; all of these hand written by some two thousand scholars in just 17 months, with the entire scope of the project, including information gathering, taking just five years, from 1403-1408.

The Yongle encyclopedia itself was the vision of Emperor Yongle, who wanted to compile a single work that held all worthwhile Chinese knowledge.  Drawing from about 8,000 Chinese texts, it covered everything from art, astronomy, drama, geology, history, literature, medicine, science, religion, engineering, agriculture, philosophy, etc.

Because of how massive this work was, it could not be readily copied, although it was originally meant to be printed with many copies to be made.  However, the sheer size of the work made this impractical.  As such, only three full copies were ever made, the original, in 1408, and two others; the second copy was made in 1557 under the supervision of Emperor Jiajing and then another was made, shortly thereafter, when the first two were nearly lost in a fire that spread through the Forbidden City.

Today only 400 of the original 11,095 volumes are known to still exist.  Although, no one knows what happened to the original copy and there is some hope it will someday be found in tact due to the fact that the entire first copy seems to have disappeared together.  The remaining two copies were gradually dissipated and eventually most of the remaining known volumes were destroyed in a fire during the Boxer Rebellion in 1900.  The largest remaining chunk of the Encyclopedia is housed in the National Library of China and comprises 221 volumes.  Other large holders of the work are the American Library of Congress, which has 41 volumes; and the United Kingdom, which has 51 volumes.