A Dinner Jacket, the Nazis, the “British” Accent, and What This All Has to Do With the BBC News 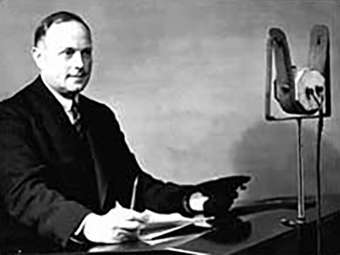 The British Broadcasting Corporation (BBC) is an institution known and respected the world over for its relative impartiality and objectivity compared to many other news sources, with numerous surveys showing that the BBC is one of the most trusted sources of news in both the UK and the US. But we’re not here to talk about that. We’re here to talk about dinner jackets, Received Pronunciation, the Nazis, and what all of this has to do with the BBC News.

Back when the BBC was first launched in 1922, the first General Manager of the corporation, Scottish engineer Sir John Reith, was insistent that the BBC be as formal and quintessentially British as possible, and he created a number of rules towards this end. (Fun fact: Reith had no experience with anything related to broadcasting when he applied to manage the BBC).

One thing in particular Reith stressed when he first helmed the BBC is that the newscasters spoke the “King’s English“, known today as “BBC English” or more technically “Received Pronunciation”, as he felt it was “a style or quality of English that would not be laughed at in any part of the country”. Reith was also aware that the broadcasts might be played abroad and felt that a regional accent would be difficult for non-Britain’s to understand.

We have made a special effort to secure in our stations men who, in the presentation of program items, the reading of news bulletins and so on, can be relied upon to employ the correct pronunciation of the English tongue… I have frequently heard that disputes as to the right pronunciation of words have been settled by reference of the manner in which they have been spoken on the wireless. No one would deny the great advantage of a standard pronunciation of the language, not only in theory but in practice. Our responsibilities in this matter are obvious, since in talking to so vast a multitude, mistakes are likely to be promulgated to a much greater extent than was ever possible before.

Further, in the 1929 BBC Handbook, it was noted that their pronunciation guidelines in this matter “[are] not to be regarded as implying that all other pronunciations are wrong: the recommendations are made in order to ensure uniformity of practice, and to protect the Announcers from the criticism to which the very peculiar nature of their work renders them liable.”

As for Received Pronunciation or RP as it’s often abbreviated to, it is defined as: “The standard form of British English pronunciation” (Though, funny enough, RP is only used by an estimated 2-3% of English people today, with the number of Scottish, Irish and Welsh users being described as “negligible”.)

First defined in 1869 by linguist, A. J. Ellis, Received Pronunciation basically entails pronouncing your words “properly” as they are written in the dictionary.

With this in mind, although one of Reith’s goals in using RP was to appeal to the widest audience possible, many listeners still felt alienated by the broadcasts being beamed into their homes because of this “upper class” accent being used. Despite this, newscasters were required to use Received Pronunciation right up until World War 2.

Why did this change during the war? The Ministry of Information was worried about the Nazis hijacking the radio waves.

You see, during World War 2, Nazi Germany invested a lot of time and money in training its spies and propagandists to speak using perfect Received Pronunciation so that they could effectively pass as Brits. Thus, the Ministry of Information became quite concerned that the Nazis could potentially issue orders over the radio in a voice that would be indistinguishable from one of their own newscasters. In addition, the then Deputy Prime Minister, Clement Attlee, noted the aforementioned fact that the total monopoly newscasters with upper class sounding voices had on the news was offensive to the working class.

This image of newsreaders being stuffy, upper class toffs wasn’t helped by an edict passed down in 1926 from Reith that stated any newscaster reading the news after 8PM had to wear a dinner jacket while on air, despite that no one could see them. Former BBC radio personality Stuart Hibberd noted of this,

Personally, I have always thought it only right and proper that announcers should wear evening dress on duty… There are, of course, certain disadvantages. It is not ideal kit in which to read the News- I myself hate having anything tight around my neck when broadcasting- and I remember that more than once the engineers said that my shirt-front creaked during the reading of the bulletin. (This- is London, 1950)

In any event, as a result of the concerns of Attlee and the Ministry of Information, the BBC hired several newscasters possessing broad regional accents that would be more difficult for Nazis to perfectly copy and would hopefully appeal to the “common man”.

The first person to read the news on the BBC possessing a regional accent was one Wilfred Pickles, who spoke with a broad Yorkshire accent. Far from being a popular move, when Pickles was hired by the BBC in 1941, his accent offended many listeners so much that they wrote letters to the BBC, blasting them for having the audacity to sully the news with the (smooth, sensual sounds of the amazing and superior) Yorkshireman’s voice. (Fun fact: The author of this piece has the same accent… No big deal.)

In fact, by 1949, Pickles himself noted that because of his accent, he had become the “central feature in a heated national controversy”, during which Pickles was frequently made fun of by various London cartoonists and in other forms of popular media.

Nonetheless, after the end of World War 2, the BBC continued to loosen its guidelines and with the advent of more localised news, began to hire more people who spoke with the respective accent of the region they were being broadcast.

That said, the BBC does continue to generally use newscasters with more mild accents in international broadcasts to make sure they are as understandable as possible to those audiences.