Why British Singers Lose Their Accents When Singing

August 9, 2013 Deborah Honeycutt
Amy asks: Why is it that when you hear a British musician sing, their accent disappears? 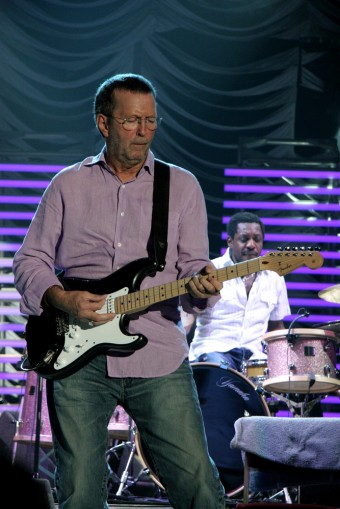 Mick Jagger, Elton John, Rod Stewart, Ed Sheeran, Phil Collins and George Michael all grew up in or near London and have very recognizably British accents.  Once on stage, they sing like someone who grew up in New England rather than old.  Yet another example is Adele, who has a lovely speaking voice, a very heavy cockney accent, yet her singing pipes do not indicate her dialect.  One might argue that Adele’s speaking and singing voices were two different people if listening without visuals.  Going beyond the British, we see the same thing with other non-American musicians, such as the Swedish band ABBA, and many others singing in English, yet from various places around the world. It seems like no matter where you’re from, if you’re singing in English, you’re probably singing with an American accent, unless you’re actively trying to retain your native accent, which some groups do.

There are several reasons we notice accents ‘disappearing’ in song, and why those singing accents seem to default to “American”.   In a nutshell, it has a lot to do with phonetics, the pace at which they sing and speak, and the air pressure from one’s vocal chords.  As far as why “American” and not some other accent, it’s simply because the generic “American” accent is fairly neutral.  Even American singers, if they have, for instance, a strong “New Yorker” or perhaps a “Hillbilly” accent, will also tend to lose their specific accent, gravitating more towards neutral English, unless they are actively trying not to, as many Country singers might.

For the specific details, we’ll turn to linguist and author, David Crystal, from Northern Ireland.  According to Crystal, a song’s melody cancels out the intonations of speech, followed by the beat of the music cancelling out the rhythm of speech.  Once this takes place, singers are forced to stress syllables as they are accented in the music, which forces singers to elongate their vowels.  Singers who speak with an accent, but sing it without, aren’t trying to throw their voice to be deceptive or to appeal to a different market; they are simply singing in a way that naturally comes easiest, which happens to be a more neutral way of speaking, which also just so happens to be the core of what many people consider an “American” accent.

To put it in another way, it’s the pace of the music that affects the pace of the singer’s delivery.  A person’s accent is easily detectable when they are speaking at normal speed.  When singing, the pace is often slower.  Words are drawn out and more powerfully pronounced and the accent becomes more neutral.

Another factor is that the air pressure we use to make sounds is much greater when we sing.  Those who sing have to learn to breathe correctly to sustain notes for the right amount of time, and singing requires the air passages to expand and become larger.  This changes the quality of the sound.  As a result, regional accents can disappear because syllables are stretched out and stresses fall differently than in normal speech.  So, once again, this all adds up to singing accents becoming more neutral.

So at this point, you might be wondering if the musicians actually know they are losing their accents when they sing. Working in radio, I’ve contemplated how accents seem to disappear over my 20-year career.   Keith Urban isn’t British, though fans of the Aussie singer swoon over his speaking voice (many women could listen to him read the dictionary) and have noticed that he sounds more American when he sings.  I have spoken to Keith a few times and decided the good-natured Keith wouldn’t mind me posing the question:  How is it you sing differently than you talk?  (Certainly not wanting to offend Keith, I began with a few genuine compliments admiring his genius guitar skills.)  He took it all in stride, laughed, then responded, ‘I don’t know.’  (More like kneh-owww)  ‘Good question,’ he said.  Though I don’t think I have an accent.  I think you do!’  It’s quite reasonable to believe that a Hoosier like me sounds a bit hillbilly to a guy from down under.  Keith could not really explain the mystery behind it, and instead went on to explain why he was wearing black toenail polish the last time I chatted him up in person.  (His wife, Nicole, has since been his inspiration to stop, he says.)  So it would seem, that at least with this sample size of one, the artist in question is not aware of any accent change when he sings. So what about others?

Andy Gibson, a New Zealand researcher at AUT’s University Institute of Culture, Discourse & Communication also believes the change in accent between speaking and singing is not a deliberate one, nor are artists even aware of the change.  A 2010 study he conducted of singers with speaking accents showed indeed that they were not aware that they sounded any different; they felt they were singing naturally.  Crystal says it is unusual for a singer to hold a regional accent through an entire song, resulting in what he calls ‘mixed accents’ for most.

And then there’s Kate Nash, the anti-norm.  The English-singing sensation was an unknown until Lily Allen mentioned her on a MySpace page and now she boasts more than 100,000 followers on twitter.  She didn’t know she had talent until she picked up her first guitar two years ago, and the rest is history.  Nash has garnered success on the music charts, accent and all, and flat out refuses to even attempt to sing with an American accent. She makes no apologies for her background and even themes her lyrics toward an English audience.  She is as English as tea in the afternoon and proud of bucking the trend that so many British artists seem to follow, whether intentionally, or more likely in most cases, not.

Thanks for reading this article!  If you liked it, please share it.  Also, here are a few more you might enjoy: