That One Time Mother Teresa was Given an Exorcism 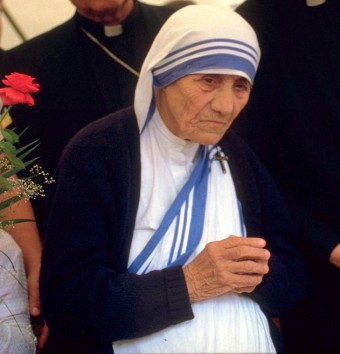 As you may know, Christianity is not the only religion to perform exorcisms. Hinduism, Judaism, and Islam all have their rituals related to exorcism. However Christian exorcisms, both Catholic and Protestant, tend to get the most press. Movies such as The Exorcist, The Rite, and The Exorcism of Emily Rose bring the process of a member of the clergy exorcising a demon from a person into twenty-first century living rooms.

The demand for exorcisms has grown alongside the additional media attention. In the 1990s, the Catholic Church had only one official exorcists in the United States. That number had increased to 10 by 2001. Even prominent leaders in the Catholic Church are reported to have been involved in exorcisms, for instance Pope John Paul and Pope Francis. But church leaders were not just the ones performing the exorcisms; in the case of Mother Teresa, she was the one being exorcised.

Born on August 26, 1910 in Skopje the capital city of the modern day Republic of Macedonia, Anjezë Gonxhe Bojaxhiu was the youngest child of Nikola and Drane Bojaxhiu. Agnes was only eight years old when her father died suddenly in 1918. Religion played a substantial role in Agnes’s youth, both in her experience with a local Jesuit parish of St. Mary and in her fascination with missionaries and their work in Bengal. She decided at twelve years old to pursue a life devoted to Catholicism.

As such, eighteen year old Agnes left her family and home behind in September of 1928 to pursue her goal of becoming a Catholic missionary. She joined the order of nuns known as the Sisters of Loreto before traveling to the Loreto Abbey in Ireland to learn English. The next year, she made the journey to India where she eventually took her vows as a nun on May 24, 1931. Agnes took a new name, as entrants to religious orders often did, to symbolize her new life as a missionary and as a nun. She fittingly decided to be named after the patron saint of missionaries, Thérèse de Lisieux. However, since another nun already used that spelling, Agnes chose the name Teresa.

Mother Teresa taught at St. Mary’s School for Girls in Calcutta for fifteen years, remaining there even after taking her solemn vows in May of 1937. She was appointed to the position of headmistress at the school in 1944. The years she spent teaching at St. Mary’s were enjoyable for Mother Teresa, but she could not help noticing the poverty rampant within the city of Calcutta.

Then a train ride from Darjeeling to Calcutta on September 10, 1946 changed her life forever. It was at this time that Mother Teresa claimed to have experienced a calling to help the poorest of the poor by leaving her convent and establishing her own religious community dedicated to serving those in poverty. Two years later, in 1948, she left her convent to receive medical training at the Holy Family Hospital in Patna. Then she put on her iconic white sari with a blue stripe and moved into the slums of Calcutta.

Teresa initially struggled to provide herself with food and to receive basic supplies for her work. Her diary revealed her doubt as she begged for the items she needed and was tempted to return to the comparatively comfortable life she had known in the convent.

“Our Lord wants me to be a free nun covered with the poverty of the cross. Today, I learned a good lesson. The poverty of the poor must be so hard for them. While looking for a home I walked and walked till my arms and legs ached. I thought how much they must ache in body and soul, looking for a home, food and health. Then, the comfort of Loreto [her former congregation] came to tempt me. ‘You have only to say the word and all that will be yours again,’ the Tempter kept on saying … Of free choice, my God, and out of love for you, I desire to remain and do whatever be your Holy will in my regard. I did not let a single tear come.”

But she continued her work and was rewarded in October of 1950 when the Vatican gave her permission to begin her own religious community: the Missionaries of Charity.

The organization began in Calcutta with only thirteen members. By the time of Mother Teresa’s death, it had grown to 4,000 strong, with members across the world who manned orphanages, hospices, and other charitable organizations. For her life’s work, though some of it somewhat controversial, she received numerous awards, including the Nobel Peace Prize in 1979.

Heart problems plagued Mother Teresa as she aged. She suffered from her first heart attack during a visit to meet Pope John Paul II in 1983, and the second occurred six years later in 1989.

She offered to resign from her position as the head of the Missionaries of Charity in 1992 after experiencing both pneumonia and heart troubles in Mexico. However, the nuns of the order expressed full confidence in her leadership and she soldiered on.

Her health further declined in 1996- a fall in April left her with a broken collarbone, and she contracted malaria in August. She also experienced a failure of the left heart ventricle that required heart surgery. It was during a hospitalization in 1997 that Mother Teresa struggled to sleep at night. She reportedly felt (relatively) fine during the day only to be so agitated at night that she pulled off the hospital monitoring equipment on her body as she thrashed around.

The Archbishop of Calcutta, Henry D’Souza, shared the same doctor as Mother Teresa when they were both hospitalized for heart problems. When he learned of her distress at night, he came to the conclusion that the devil must be disturbing her sleep. He said of the incident:

“When doctors said they could not find a medical reason for her sleeplessness, I thought she might be getting attacked by the devil… I wanted her to calm down and asked a priest, in the name of the church, to perform an exorcism prayer on her.”

After a bit of controversy arose about the need for an exorcism in that circumstance and whether Mother Teresa had even been in her right state of mind to be able to consent to such a thing over more traditional prayers, D’Souza disputed his own previous quotes claiming the local priest, Father Rosario Stroscio of Sicily, performed an exorcism on Mother Teresa. Instead, he later claimed Father Stroscio simply prayed over Mother Teresa to help alleviate her sleeplessness and to ease her inner peace, and that at no point did D’Souza think she was possessed by an evil spirit. However, it would seem D’Souza’s earlier statements were indeed accurate, at least in terms of the exorcism being performed. By Father Stroscio’s own admission, he spoke “the prayer of exorcism to drive out evil spirits…” when at Mother Teresa’s bedside.

The archbishop kept silent about the exorcism prayer until four years after Mother Teresa’s death, and his actions, as noted, left many confused. Exorcisms conducted by the Catholic Church usually only occur after exhaustive reviews of the person to rule out anything physical or psychological which may cause the disturbances. As such, Professor of sociology and anthropology at Fordham University, Michael Cuneo, believed the archbishop and Father Stroscio may have performed an informal exorcism used at baptisms and for the dying, called the rite of deliverance.

Whatever the case, it reportedly worked. Archbishop D’Souza stated the nuns who were watching over Mother Teresa told him she slept soundly afterwards.