This Day in History, 1374: Thousands of People on the Streets of Aachen, Germany Suddenly Suffer from the “Forgotten Plague”, Dance Mania

Amidst our people here is come, the madness of the dance. In every town there now are some, who fall upon a trance. It drives them ever night and day, they scarcely stop for breath. Till some have dropped along the way, and some are met by death. [A 17th century poem about Dance Mania] 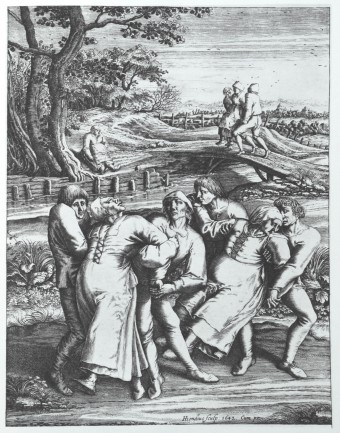 On this day in history, 1374, people on the streets of Aachen, Germany inexplicably began dancing around and reportedly experiencing hallucinations with an apparent case of “St. John’s Dance” or “The Dance Plague”, with their numbers swelling into the thousands before the event ceased.  This was the first of the two best documented cases of this phenomenon, though this sort of thing wasn’t unheard of, with instances as far back as the 7th century. It also periodically popped up all the way up to the 17th century.

While a mass number of people suddenly breaking out in hysteric dance and sometimes song may sound funny and today YouTube gold, in fact it was anything but at the time. The people would continue vigorously jumping and dancing about, sometimes also screaming out or chanting, until completely exhausted at which point they would collapse and some would die from cardiac arrest or injuries suffered from their violent dance.  Those who didn’t die, once exhausted, would often twitch around on the ground, foaming at the mouth and gasping, until they were able to once again get up and continue their dance. This Dance Mania in some cases would last for weeks or even months.

Besides dancing, participants would also sometimes roll around in the dirt squealing and acting like animals; others would rip off their clothing and sometimes would begin having sex with other Dance Mania participants.  Some also would scream for people to beat the bottoms of their feet while they writhed on the ground or would other times try to get people to throw them high in the air.  Others would make crude or sexual gestures at those around them or threaten to attack spectators who refused to join in the hysteric dance.

At the time, it was thought that this hysteric dancing was possibly caused by demons possessing people, a curse, “hot blood”, and a number of other wild guesses.

Today most take a more pragmatic view of things.  One of the more popular theories it that these “Dance Mania” events were carefully organized, possibly by a religious cult or cults who were performing some ritual or other, not unlike certain rituals Ancient Romans and Ancient Greeks used to perform.  This is somewhat supported by the fact that many of the instigators of Dance Mania events were often people on pilgrimages.  Normally this sort of behavior would have gotten them burned at the stake or the like, but masking it as a mass outbreak would sometimes allow them to perform their ritual publicly without retribution.

Another theory is that it was caused by ergotism, also called “St. Anthony’s Fire”. Specifically, the rye and other food stuffs eaten by people may have been infected with a fungus called Claviceps purpurea, which in turn contains alkaloids that cause hallucinations, seizures, mania, convulsions, irrational behavior, and unconsciousness.  However, it is also associated with loss of limbs due to restricted blood circulation, and these incidents of Dance Mania don’t seem to be connected with many of the people having their limbs become gangrenous.

Another popular theory, which seems the most reasonable, is that due to the extreme stress people were often under during times where Dance Mania would often pop up, such as rampant plagues, floods, poverty, etc., it simply started with a few people snapping and others joining in.  As the numbers swelled, herd behavior took over and a form of mass hysteria resulted.  As the hysteria reached a fever pitch, people were even willing to inflict serious physical injury upon themselves, even to the point of death from injury or exhaustion, seemingly unable to stop.  In the extreme, this could potentially cause hallucinations and the like as the people became sleep deprived, dehydrated, malnourished, and physically exhausted.

Popular “cures” for Dance Mania at the time included: