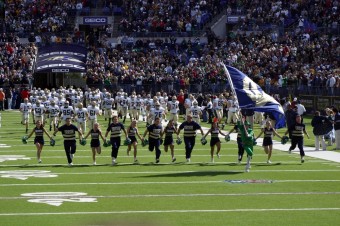 When the green and blue uniformed athletes of the University of Notre Dame run on to the field or court, their fans are rooting for the “Fighting Irish.” Represented by a small green leprechaun- hat tilted with his fists up, ready to fight- the athletic teams of this South Bend, Indiana Catholic school have been playing under this moniker for, officially, 87 years. But here’s the thing: the school was actually founded by French Catholic priests, not Irish Catholics. So, how did Notre Dame become the “Fighting Irish?” Shouldn’t they be called the “Fighting French?”

In November 1842, eight members of the newly-established Congregation of Holy Cross, based in a small village outside of Le Mans, France, were given 524 acres of land by the Bishop of Vincennes in the, at the time, 35-year-old state of Indiana. Within two years, they had established a school on the land. A 29-year-old French priest, Edward Sorin, named the school “L’Université de Notre Dame du Lac,” or the “University of Our Lady of the Lake.” The school was Catholic and all-male (and would stay that way for 128 years, until 1972 when it became coed). In 1879, a fire destroyed the Main Building. Always a religious man, Sorin said,

I came here as a young man and dreamed of building a great university in honor of Our Lady. But I built it too small, and she had to burn it to the ground to make the point. So, tomorrow, as soon as the bricks cool, we will rebuild it, bigger and better than ever.

And they did rebuild, indeed making the school bigger and better than before as was vowed. Less than a decade later, in 1887, the athletic department even established a football team.

The game of (American) football has its origins in rugby, first played in English public schools during the mid-19th century. The rules and how the game was played varied from place to place, but when the game made its way over to America, it developed into something a little different. Many historians believe that American football can be traced back to a game played between Rutgers University and Princeton in 1869. Using modified London Football Association rules, the game quickly took off among eastern colleges.

In 1876, Walter Camp, a Yale grad and coach who would become known as the “Father of American Football,” proposed  a line of scrimmage, as well as down and distance rules, forever separating it from rugby. The game expanded very quickly, gaining favor on the east coast all the way to the Midwest. In 1880, there were only eight universities that fielded collegiate football teams. By the turn of the century, there were 43. One of those was Notre Dame.

On November 23, 1887, Notre Dame and Michigan matched up. 127 years later, their rivalry is still going. On that November day, Michigan won eight to zero, though as the Scholastic, the University’s student magazine, pointed out, it was never meant to be a particularly competitive game:

It was not considered a match contest, as the home team had been organized only a few weeks, and the Michigan boys, the champions of the West, came more to instruct them in the points of the Rugby game than to win fresh laurels.

Over the next twelve seasons, the Notre Dame football team compiled a 25-11-3 record against the other intercollegiate teams under the nickname the “Catholics.” Many of these other college teams they beat were also Catholic schools- Boston College, Fordham, and Holy Cross just to name a few. As opposed to Notre Dame’s French background, they were founded by, and intended for, recently immigrated Irish Catholics. The Irish Potato Famine of 1845 convinced many to make their way across the Atlantic to America. As they settled in eastern cities, they desired a place for, or at least to aspire to, a higher education. These colleges represented upward mobility and the ability for anyone to make it in America.

As recent immigrants to this country, the view of the Irish were colored by pretty jingoistic views. They were known as drunks and “brutes,” while possessing a violent temper. Even future President Theodore Roosevelt, while a New York State Assembly Member, had some choice words to say about the Irish, “The average Catholic Irishman of the first generation, as represented in the Assembly [is a] low, venal, corrupt, and unintelligent brute.” To call someone Irish was to imply that they were uncivilized, violent, and un-American. In other words, it was an insult.

So this brings us to the nickname. It seems that not even the University itself is exactly sure how this rather odd nickname came to be, though there are some popular theories and with the documented evidence at hand we can mostly piece together in general how it came to be.

To start, one legend states it was 1899 when, during the second half of a game between Notre Dame and Northwestern with Notre Dame leading five to nothing in Evanston, Illinois, the fans started chanting “Kill the Fighting Irish, Kill the Fighting Irish.” Whether they  failed to realize that Notre Dame was French Catholic or simply just didn’t care and were looking for a choice insult, it didn’t matter. The nickname supposedly stuck from there.

Another story, albeit a much kinder representation of the nickname, goes that the name came from the Union Army’s Fighting Irish 69th Regiment. Part of the larger Irish Brigade, they fought with valor, bravery, and were brutally effective. They went into every battle with their colorfully designed green battle flag. Legend has it that when President Lincoln paid them a visit, he picked up a corner of the green Irish flag, kissed it, and said, “God bless the Irish flag.” So, when the press saw these Notre Dame football players play with toughness, courage, and assuming they were also Irish, the nickname that once belonged to the beloved 69th Regiment was given.

Yet another theory of how the nickname came to be, this one with at least a tiny bit of documented evidence, was from a game featuring Notre Dame and Michigan in 1909. With Notre Dame trailing at the half to their rivals, a player turned to some of his “Irish” teammates (or at least had Irish names like Dolan, Kelly, Glynn, and Duffy) and yelled “”What’s the matter with you guys? You’re all Irish and you’re not fighting worth a lick.” The team went on to win the game eleven to three and the press attributed the victory to the “Fighting Irish.”

After this 1909 match, Sportswriter E.A. Batchelor, supposedly having overheard the aforementioned exchange, published an article in the Detroit Free Press titled, “‘Shorty’ Longman’s Fighting Irishmen Humble the Wolverines to Tune of 11 to 3,” giving us the first known documented evidence of the team being called by this nickname.  He went on to write,

Eleven Fighting Irishman wrecked the Yost machine this afternoon. Three sons of Erin, individually and collectively representing the University of Notre Dame, not only beat the Michigan team, but dashed some of Michigan’s greatest hopes and shattered Michigan’s fairest dreams.

In the end, whether Batchelor really overheard such an exchange; came up with the nickname himself; or, perhaps more likely given he uses the nickname casually as if the reader should know exactly who he’s talking about, had heard it elsewhere, the generally accepted genesis of the name lies in the previously mentioned popular association between Catholics and the Irish.  Given Notre Dame had around this time gone by the “Catholics,” among other monikers like the “Terriers,” (with an Irish Terrier during this time supposedly a staple on the sidelines), it’s perhaps not much of a leap to see how someone, perhaps Batchelor, perhaps not, could have made the jump to “Irish,” despite the school’s French origins and mixed heritage athletes. This is particularly the case if it was indeed initially meant as an insult, as it would seem.

Whatever the case, as you’d expect given the prejudices of the day, the nickname was not looked upon favorably by the University brass. Besides the fact that it seemingly was originally meant as an insult, this was a French Catholic University, not Irish Catholic. However, a little over a decade after Batchelor’s article, the President of the University, Father Bums, stated that even though the moniker had been “discountenanced by the authorities of the University,” at this point in time, its “usage [was] in a playful spirit, no offense being intended…”

With the nickname firmly embraced, despite the negative connotations, soon, students, players, media, and even legendary coach Knute Rockne were calling their beloved team the “Fighting Irish.”  Noted Notre Dame alumnus Francis Wallace also did his part in widely popularizing the moniker, commonly using it in his 1920s New York Daily News articles. With little choice and a nod to the complementary aspects of the nickname- referring to the athletes’ never say die spirit and scrappy determination- University President Rev. Matthew Walsh adopted “Fighting Irish” as Notre Dame’s official nickname in 1927.