The Origin of the Color Belt Scheme in Martial Arts 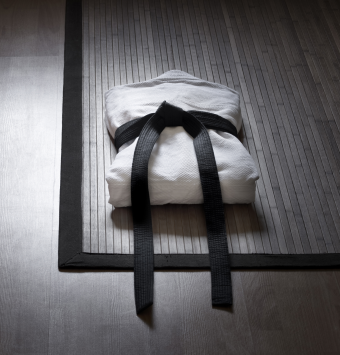 White, yellow, orange, green, blue, purple and black, the colors of martial arts belts denote student development, skills and experience. However, contrary to popular belief, using colored belts to denote rank or ability in martial arts is a relatively recent invention in the otherwise ancient arts- one that was only introduced around the turn of the 20th century.

Much of the common look of the modern martial art uniform, including the comfortable baggy pants and belted smock, was introduced by the founder of judo, Kanō Jigorō, who first took up jujutsu in an effort to gain strength. (At the time he first began to purse the martial art, he was only 5 feet 2 inches tall and 90 pounds.)

A well-regarded teacher and polymath in his home country of Japan, Jigorō created judo from his study of jujutsu in the late 1800s.

Shortly after creating judo in the 1880s, Jigorō began awarding some of his students the rank of Shodan, literally “beginning degree,” which is the lowest black belt rank, first bestowing this rank on Tomita Tsunejirō and Saigō Shirō.

This ranking system was inspired by the existing Dan ranking system in Go, devised by Honinbo Dosaku in the late 17th century.  Prior to this, more experienced students in various forms of martial arts in Japan tended to be given scrolls indicating their abilities.

In these early days of judo, the students did not wear the garb we today associate with many forms of martial arts. Rather, judo was practiced wearing a traditional full length, light robe (kimono) secured with a belt (obi).

In 1907, Jigorō introduced the modern uniform (judogi) and its thinner obi, although the colors were limited to black for yudansha and white for the less experienced (mudansha). The judogi‘s white denoted simplicity and purity, and the white belt of the neophyte showed that the student began empty, but eventually was filled with knowledge (which, as the opposite of the simplicity of the pure, was shown with the black of the yudansha’s belt).

Over time, and to recognize even greater levels of achievement and skill, by around 1930, Jigorō had incorporated black belts with red and white panels (the red denoting the sacrifices made and desire to learn), and awarded these (kohaku obi) to what are today known as 6th, 7th and 8th degree black belts.

Another judo master, Mikonosuke Kawaishi, who was teaching in Paris, is credited with incorporating other colors into the uniform around 1935, as a way to motivate his students toward even greater achievement. In short order, masters of other disciplines, including karate and tae kwon do, adopted the colored belt system, as well.