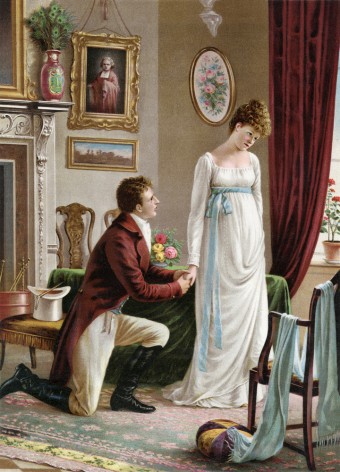 According to the popular myth, chastity belts were locked metal or leather belts that young maidens wore to keep themselves “pure.” The myths usually date the belts to the Crusades (an approximately two hundred year period between the 11th and 13th centuries) when knights would be gone for years, raping and pillaging in the name of God, and their wives would be left at home, perhaps lonely and looking for companionship or at the least vulnerable to unscrupulous men.

So to guard against this, the story goes that the knights would make their wives wear chastity belts as a pledge of fidelity and for protection. Except these stories weren’t true and, in fact, knights and maidens had likely never even heard the term “chastity belt.”

The first known depiction of a chastity belt, or “female chastity device,” only dates back 600 years to Konrad Kyeser’s 1405 book on military technology, Bellifortis. In the book, Kyeser writes about and draws battering rams, crossbows, instruments of torture, mentions how to castrate a man, and, though not particularly related to war directly (merely soldier’s pastimes), describes a female chastity device.

The “female chastity device” drawn by Kyeser is accompanied by this text (translated):

These are hard iron breeches of Florentine women which are closed at the front.

He goes on to state in an equally ironic tone,

Padlocks unto the four-legged creatures, breeches unto the women of Florence, A joke binds this lovely series together, I recommend them to the noble and obedient youth.

Given the lack of any verifiable artifacts from this era (or indeed for a couple centuries more), and the tongue and cheek manner such devices are mentioned here, it is thought by most historians that they either weren’t widely used or he simply made them up and was insinuating that Florentine women were not generally open to soldier’s advances.

That said, several poems of this era do refer to chastity belts, though as simple strips of cloth that covered the female’s privates. They are also generally mentioned as more of a symbolic gesture. Essentially, it was a promise ring…. but a bit further south.

Paintings and drawings from 15th and 16th centuries depict women wearing metal chastity belts (even, padlocks on their tongues), but these appear in stories as fictional narrative elements. As in, a story where a jealous husband forces his wife to wear a lock and key belt to prevent her from running off with a rival of his.  Certainly no one would have worn a padlock on their tongue, and wearing such metal devices directly against the skin and genitals for lengthy periods of time was a sure-fire way to get abrasive wounds and infection, which particularly back then could be lethal. The lack of surviving artifacts or direct documentation of anyone actually wearing these once again has historians skeptical that anyone did at this point in history, but at the least with the increasing number of mentions in fiction, it’s possible that some individuals really did wear them.

So when did the first, verifiable chastity belt come about? You might have heard that the first was from 1388, owned by Francesco di Carrara II, the last sovereign lord of Padua (the oldest city in northern Italy). The belt was supposedly designed by him presumably for his wife. The belt is still on display at the Doges Palace in Venice, but many historians doubt its legitimacy. In fact, several prominent museums,  including the world-renown British Museum, have either removed or changed the dates listed on their collection of similar chastity belts due to concerns that they weren’t from the 14th, 15th, or 16th centuries. For instance, one of the chastity belts housed at the Musée de Cluny (National Museum of the Middle Ages) in Paris, long thought to belong to Catherine de Medici, was erroneously labeled as from the 15th century. In the 1990s, they tested the metal and, as it turns out, it dates only back to the early 19th century.

He less resembled a living creature than a corpse, lying upon straw, meager, pale, and filthy, casting forth an infectious stench, almost incapable of motion, a watery palish blood issuing from the nose, the tongue frightfully swelling, and saliva constantly frothing from his mouth…the disorder of the mind was equal to the body.

A few decades later in a medical text, it was said you should,

Teach your boy that when he handles or excites the sexual organs, all parts of the body suffer. This is why it is called “self-abuse.” The sin is terrible, and is, in fact, worse than lying or stealing. For, although these are wicked and will ruin the soul, self-abuse will ruin both soul and body. This loathsome habit lays the foundation for consumption, paralysis, and heart disease. It makes many boys lose their minds; others, when grown, commit suicide.

Also during this time, some women found wearing chastity belts quite handy outside of any temptation. With the Industrial age commencing in America and Europe, more women found themselves in factories and the workplace. At times, these were dangerous places for women, particularly with the rampant drunkenness often found by workers in the factories of this era. Locked metal chastity belts worn away from the home provided a great deal of protection.

Today, chastity belts have made a resurgence for use in sexual role-playing. We will leave it at that, but next time, someone talks about a fair maiden from medieval times and her chastity belt, you can let them know that the evidence that chastity belts were used during the medieval times is scant, being more a product of the much more recent Victorian era.