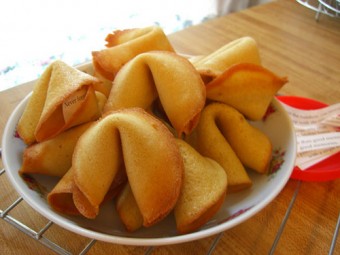 Today I found out fortune cookies were invented in Japan, not China or America.

The commonly held notion that they were invented in China typically comes from the fact that they are primarily served in Americanized Chinese restaurants. However, you will not find fortune cookies in actual Chinese restaurants, nor will you find historical records of a similar food item in China. The largest manufacturer of fortune cookies, Wonton Food, based in New York, even once tried to introduce fortune cookies to the Chinese in the late 1980s. After three years, they gave up, as they simply weren’t a popular food item there.

This fact was very recently (1990s) discovered when a researcher, Yasuko Nakamachi, encountered a fortune cookie-shaped cracker, called a Tsujiura Senbei, made by hand in a family bakery (Sohonke Hogyokudo), near a Shinto shrine outside of Kyoto, Japan. This “cracker”, not only looked like a fortune cookie, it also contained a fortune, called an “omikuji” (fortune slip), and was traditionally sold in shrines and temples.

These crackers are cooked by pouring batter into waffle-iron-like molds and then holding the irons over coals. While the cracker is still warm, little pieces of paper containing a message are folded within.

In any event, this all lead to research on exactly when these crackers first started being made, to see if they predated when the fortune cookies first started showing up in America. One of the earliest documented definitive references can be found in an 1878 image of an apprentice baker making these fortune cookies in a bakery. Not only was the apprentice baker depicted making these cookies, but he was making them exactly as they were being made by the bakery Nakamachi observed them being baked at outside of Kyoto. This image was found in the 19th century book of stories, “Moshiogusa Kinsei Kidan”, and pre-dates fortune cookies popping up in America by about two to three decades. Going back even further than that, there is a reference in a book, from the early 19th century, where a woman tries to placate two other women with a cracker that contains a fortune inside.

Interestingly, descendants of two of the first bakeries to make fortune cookies, including one that has been in operation for about a century in America, still possess the original black iron “kata” grills their ancestors used. These grills are nearly identical to the ones being used by the bakeries outside of Kyoto and which also mirror the one depicted in the 1878 image of the apprentice baker.

So fortune cookies were brought to America from Japan by Japanese immigrants. How then did they end up in Americanized Chinese food restaurants? There are a few plausible theories out there, listed below, but nobody knows for sure.

Another theory is simply that the Japanese bakers themselves were obviously perfectly willing to sell to any restaurant that wanted to buy. Chinese cuisine typically doesn’t have any dessert items, thus it is plausible that the fortune cookie caught on more with Chinese restaurants because it made for a nice cheap dessert to add to the menu. Also, in the early 19th century, many Japanese immigrants opened Americanized-Chinese restaurants as Americanized-Chinese cuisine tended to be more popular than traditional and even Americanized-Japanese cuisine to Americans.