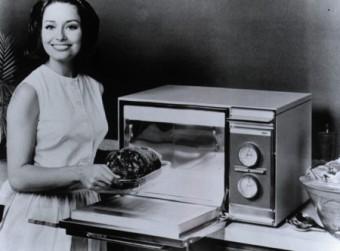 Today I found out why you generally shouldn’t put metals in a microwave.

On top of that, the inside walls of your microwave oven are made of metal.   This forms something called a Faraday Cage which traps the microwaves inside the box, so that they cook the food and not things around the microwave oven, like you.  If you look closely, you’ll also see that the window you look at the food through has metal mesh lining it.  The holes in this mesh are smaller than the wavelengths of the electromagnetic radiation your microwave is producing.  This makes it so the waves can’t pass through the holes.  Visible light, however, is comprised of much smaller wavelengths, so that form of radiated energy passed through the holes just fine, allowing you to see inside your microwave while it’s running without getting cooked yourself.

So if the inside of your microwave is lined with metal and certain food products, such as hot pockets and pot-pies, have containers that contain metal, why does your microwave manual say not to put metal in the microwave? 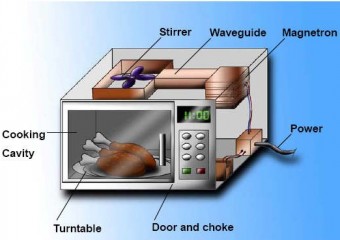 First, let’s talk a little about how a microwave oven actually works.  At its core, a microwave oven is a pretty simple device.  It’s basically just a magnetron hooked up to a high voltage source.  This magnetron directs microwaves into a metal box.  These generated microwaves then bounce around inside the microwave until they are absorbed via dielectric loss in various molecules resulting in the molecules heating up (more on how this works in the Bonus Factoids section).  Matter that work well here are things such as water, ceramics, certain polymers, etc.  These all end up converting microwave energy into heat quite effectively.

Metals, on the other hand, are great conductors of electricity, being packed with electrons that can move freely.  Depending on the shape/type/thickness/distribution/etc. of metal, you may observe some heating of the metal itself in the microwave or none at all.  You may also observe some arcing of electricity or none at all.  In any event, when these microwaves hit the metal, free electrons on the surface of the metal end up moving from side to side very rapidly.  This, in turn, prevents the electric wave from entering the metal; thus, the waves end up being reflected instead.  However, there is also the potential that this ends up creating a sufficient charge density that the electrical potential in the metal object exceeds the dielectric breakdown of air.  When this happens, it will result in arcing inside your microwave, from that metal to another electrical conductor with lower potential (often the wall of the microwave).  In extreme cases, these electrical sparks can end up damaging the wall by burning small holes in the metal wall.  It can also end up burning out the magnetron in your microwave oven or, in modern microwaves, can provide a surge that ends up damaging sensitive microelectronics, possibly killing your microwave or making it unsafe to use, in the case of a hole in the inner metal wall in your microwave.

On a more mundane level, something like a spoon or a metal plate or the like, positioned correctly, will simply make your food potentially not cook normally.  On that note, it is once again, actually acceptable to put metal in a microwave under the proper conditions.  Some microwaves even have metal grates inside for setting food on, such as is often the case with certain convection ovens.  There are also certain types of metal pots and pans that are microwave safe.  These all, however, are carefully designed to not cause any problems in your microwave oven.  In general, putting metal in the microwave is unsafe, not because you are at risk of bodily harm or the like (though in extreme cases a fire might be started in your microwave), but, more to the point, primarily because it has the potential of damaging your microwave in the ways listed above.