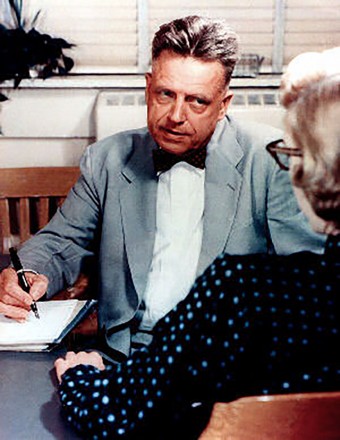 On June 23, 1894, Alfred Charles Kinsey, one of the most influential and controversial figures of the 20th century, was born in Hoboken, New Jersey. He is widely recognized as one of the first people to approach human sexuality, in all its forms, from a scientific angle. The son of a religious zealot, Kinsey was a sickly child raised in a strict, repressed environment.

Alfred studied biology at Bowdoin College in Maine against his father’s wishes, who pushed him to go into engineering. Dear ol’ dad was so peeved he didn’t show up when his son graduated with high honors. Kinsey went on to study applied biology at Harvard, where he met eminent field biologist and Darwinian William Morton Wheeler.

At this time, Kinsey rejected his religious beliefs and began an exacting Darwinian study into the evolution and taxonomy of the gall wasp. He received his doctor of science degree in 1919 and began teaching at Indiana University the following year; by 1926, he became a full professor.

In 1938, Kinsey’s research and teaching career took a different turn. He began teaching a course on marriage and the family instigated by a student petition; highlights of the course included illustrated classes on the science of sexual stimulation, the mechanics of intercourse, and birth control basics. Kinsey also lectured passionately against repressive laws and social attitudes meant to squelch sexual expression. He also firmly believed that delaying sex until marriage was a recipe for disaster.

His mission was to replace outmoded ideas of sexual behavior with a more scientifically accurate one, stating, “nearly all the so-called sexual perversions fall within the range of biological normality.”

Kinsey then developed the Kinsey Reports and the Kinsey Scale, and the Kinsey Institute for Research in Sex, Gender, and Reproduction at Indiana University was a natural offshoot of his research. Kinsey and his staff conducted over 18,000 interviews. The fruit of these resulted in Sexual Behavior in the Human Male, published in 1948.

One of the first things Kinsey’s research revealed was that what the average male generally admitted to doing sexually and what they actually were doing differed greatly. According to his findings, practically all men regularly masturbated, one out of three had a homosexual experience, and premarital sex and infidelity were far more common than cultural lip service would lead one to believe.

Perhaps illustrating the point, people publicly vilified and lamented how this book was “the most anti-religious book of our times” while clutching their pearls, but within weeks of its publication, it was a national best-seller that bookstores had a tough time keeping on the shelves.

This book was also an instant sensation, but it created a huge backlash as well. A Congressional probe was launched into its funding, and, of course, it was a custom of the times for politicians to publicly accuse anyone they didn’t agree with of being a commie (Better Dead than Red!), which happened to Kinsey. As a result of all this, ultimately the Rockerfeller Foundation yanked his funding.

Kinsey’s health suffered partially because of all the stress and he ultimately died in 1956 at age 62, reportedly of pneumonia.

While his methodology has been widely criticized (correctly, in some cases), nevertheless Kinsey’s work was groundbreaking and he’ll always be remembered as both a scientist and a reformer who helped usher in the sexual revolution and contributed to the abolishing of Victorian era prudery.