This Day in History: June 22nd- Captain Gregory and the Invention of the Doughnut 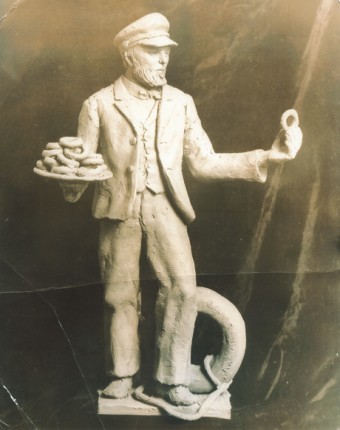 Doughnuts are one of those culinary delights that most people love and that seem to have been around forever. Forever may be pushing it, but we do have evidence that the ancient Greeks and Romans would fry up strips of pastry dough and proceed to glaze them with a coating of honey (yum) or fish sauce (not something that would fly off the shelves at the local Dunkin’ Donuts).

During the Middle Ages, Arab chefs began taking bits of unsweetened yeast dough and then frying them up and covering them with a sugary syrup. These fritters were popularized throughout Northern Europe by the 1400s, especially in the Netherlands, Germany, and England. By the 15th century, sugar was a rarity in Germany, so fritters were prepared with meat or other savory fillings.

There are a variety of versions of this tale (including his own story changing quite a bit over time), but the version he put forth in the Washington Post (Mar. 26, 1916) was as follows:

Now in them days we used to cut the doughnuts into diamond shapes, and also into long strips, bent in half, and then twisted. I don’t think we called them doughnuts then—they was just ‘fried cakes’ and ‘twisters.’

Well, sir, they used to fry all right around the edges, but when you had the edges done the insides was all raw dough. And the twisters used to sop up all the grease just where they bent, and they were tough on the digestion.

Well, I says to myself, ‘Why wouldn’t a space inside solve the difficulty?’ I thought at first I’d take one of the strips and roll it around, then I got an inspiration, a great inspiration.

I took the cover off the ship’s tin pepper box, and—I cut into the middle of that doughnut the first hole ever seen by mortal eyes!

…Well, sir, them doughnuts was the finest I ever tasted. No more indigestion—no more greasy sinkers—but just well-done, fried-through doughnuts.”

He then claims to have taught this to a variety of people and thanks to being a sailor, the holed doughnut idea spread throughout the world.

Whether this is true or not, it is often suggested that the reason doughnuts have holes is the reason Captain Gregory stated, to get rid of the slightly doughy center.

However, given the timing of when the round, holed doughnut showed up, and given that people have been frying up dough and making doughnut-like cakes for centuries and no one thought there was much need to remove the center before, excepting some who would put fruit and the like there instead, it is also very possible that the real reason for inventing the holed doughnut was simply that it made a convenient way to display the cakes for sale.

You see, around the same time doughnuts with holes popped up in New York City, bagels were also becoming very popular in New York and were commonly put on display stacked on wooden dowels.  It may simply be that bakers in New York first got the bright idea to put holes in the dough before frying when one or more of them thought to display the doughnuts in the same way as bagels, on dowels, which no doubt saved display space.  With this theory, making more evenly fried dough may or may not have come into play.

In any case, whether it’s deserved or not, Captain Hanson Gregory is often given credit, even by otherwise reputable sources, for inventing the holed doughnut and has even been immortalized for all time on a plaque in Rockport Maine bearing the inscription:

In commemoration. This is the birthplace of Captain Hanson Gregory, who first invented the hole in the doughnut in 1847. Erected by his friends, Nov. 2, 1947.