July 1, 2015 Melissa
Shristi U. asks: Why did trains used to have cabooses but now don’t? 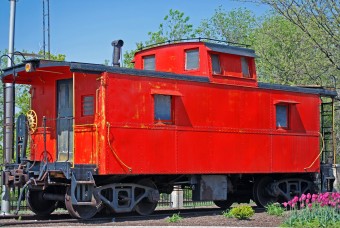 For well over a century, cabooses, the cute quintessentially red cars at the rear of trains in years past, served an integral function in train operations.

Carrying a brakeman and a flagman back when brakes were set by hand, when it was time to slow the train, the engineer would blow the whistle. This signaled to the brakemen, and one would emerge from the caboose and work his way toward the engine, while another would leave the engine and work his way back toward the caboose. At each car, the brakemen would stop and turn its brakewheel with a club. Once the train stopped, the flagman would leave the caboose with a flag, lantern or other visual display and walk back down the track to warn any approaching trains.

The caboose was also an office for the conductor, who was responsible for managing the paperwork that accompanied each freight car. Often assigned to a particular man, the interiors of cabooses would be equipped as temporary living quarters, and even decorated with personal items like photos and curtains. Considered a home away from home, crews would sometimes sleep in the cabooses, and many conductors even prepared meals in them.

Legend has it, the cupola on top of the caboose was invented by a conductor who used to stack boxes up, sit on them, and look through a hole in the roof of his car. Regardless of its true origins, after about 1863, the cupola became a fixture on cabooses, and was used by all of the men to observe the train and look for signs of trouble (like overheated hotboxes).

Also called a doghouse, bone breaker, hack, hearse, monkey cage, crumm, and snake wagon, the caboose, like the brakemen and flagmen who used them, became unnecessary as technology was developed that performed their jobs just as well, and for less money.

Air brakes were developed in the 1880s, thus eliminating the need to turn a wheel. Electric-powered signals, triggered by track circuits, made signaling other trains automatic, and improvements in bearings made the problem of overheating a thing of the past.

In addition, trains grew longer and the cars became so tall that viewing much of the train from a caboose became impossible. On top of that, computers eventually took over the paper-handling duties, so there was no need to store any such paperwork on board.

Rather than a cheerful red car, today’s trains have small boxes that fit over their rear couplers to monitor operations. Tied into the train’s air brake line, these End of Train devices (EOTs) transmit brake pressure information to the engineer, who can also adjust the air brakes with the device. This is helpful for emergencies, since even if the train breaks in two, the brakes of the rear part can be activated.