A Violinist and the Devil

June 9, 2015 Melissa
Karl M. asks: How did the story start about Niccolo Paganini selling his soul to the devil in exchange for mastering the violin? 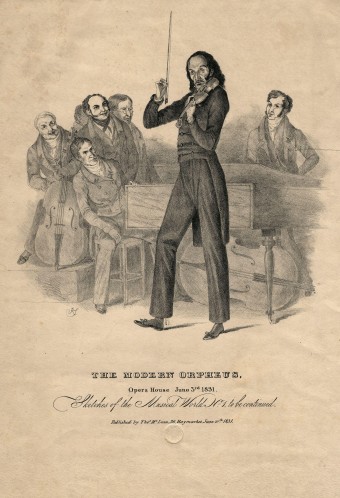 At the height of his fame and fortune, Niccolò Paganini, arguably the greatest violinist ever to live, was both the toast, and the bane, of Europe. Considered by most a musical genius, by some a musical god and by others, the Devil’s minion, Paganini’s virtuosity, appearance and bearing had some believing his skill could only come after he had made a pact with the Devil.

The Devil’s Violinist was born on October 27, 1782, in Genoa, Italy. It is said that Paganini’s mother had her heart set on him becoming a famous violinist, and from this, a rumor later arose that she had made a deal with the Devil, trading her son’s soul for the chance to be the greatest in history.

Whatever the case, Paganini began training on the mandolin at age 5 and the violin by age 7, both under the instruction of his father. He played his first public performance at age 11, in Genoa, and by age 13 he was sent to study with famous violinist and teacher Alessandro Rolla. Yet when he arrived, Rolla reportedly decided Paganini’s skills were such that there was nothing he could teach him. Instead, he referred him to his own teacher, Ferdinando Paer. Again, because of his abilities, he was after a short period passed off to Paer’s teacher, Gasparo Ghiretti.

Two years later, at the age of 15, Paganini began playing solo tours, but within a year had a breakdown and succumbed to alcoholism. (Besides supposedly being in league with the Devil, throughout his lifetime he was known as a heavy gambler, drinker, and shameless womanizer.) He recovered and after a stint as the court violinist for Princess Elisa Baciocchi (Napoleon’s sister), he once again toured Europe.

Unparalleled as a performer in his era, Paganini was one of the first major violinist to choose to publicly perform various works without sheet music, going strictly on memorizing the works. Freed from standing in front of sheets of music, Paganini flailed about the stage, contorting his body as he danced his exceptionally long and thin fingers across the instrument, earning him the nickname “Rubber Man.”

Paganini’s genius, however, wasn’t limited to performance and traditional violinist skills. He also helped popularize certain techniques common today, including bouncing the bow on the strings as well as plucking the strings with his left hand. He even purposely sometimes mis-tuned the strings when it made a particular piece easier to play. He also heavily experimented with using harmonics in his music, as can be heard here.

Paganini, himself, presented a striking figure. He was tall and remarkably thin, with hollow cheeks, very long fingers, pale skin, “flaming eyes” and “thin lips that held a sardonic smile.” He also often dressed in all black for performances. Together with his virtuosity, and the fact that the violin had long been considered the “Devil’s instrument,” by the time one half-crazed fan at a concert in Vienna claimed he saw the Devil helping Paganini play, the other patrons only had to look at him to be convinced.

After this, reports of Paganini doppelgangers, either sitting with his audiences or hovering by his side during a performance (sometimes with the addition of horns, hooves, tail and red clothes) became common. By one dubious report, the Devil even once caused lightning to strike the free end of Paganini’s bow during a performance.

Paganini had always been sickly, suffering from a variety of ailments throughout his life including syphilis in 1822 which was treated with mercury, causing other health issues. In 1834, he was also diagnosed with tuberculosis, though recovered. However, by later 1834, at the age of 54, he had lost the stamina to play and retired from public performance. In increasingly poor health, Paganini primarily spent his last years teaching, including for a brief period instructing famed Polish violinist Apollinaire de Kontski.

His death only fanned the flames of his supposed pact with the Devil.  You see, shortly before his death, Paganini turned away a priest who had come to perform the last rites. His refusal is reportedly because he felt he wasn’t about to die and the whole thing was premature, though of course the rumor-mill had other ideas for the reasoning behind his refusal. He died approximately a week after this without ever receiving last rites. This, combined with his long-rumored association with the Devil, resulted in the local church refusing to bury his body on consecrated ground, despite Paganini being a member of the Order of the Golden Spur, having been granted that honor by Pope Leo XII in 1827.

Whatever the rumors said, after four years, Pope Gregory XVI allowed his body to initially be transported to Genoa and it was ultimately laid to rest in La Villetta Cemetery in Parma, Italy, some 200 or so kilometers from his birth place of Genoa, where it remains to this day.