A Little Girl, a World Leader, and a Nuclear War- The Story of Samantha Smith 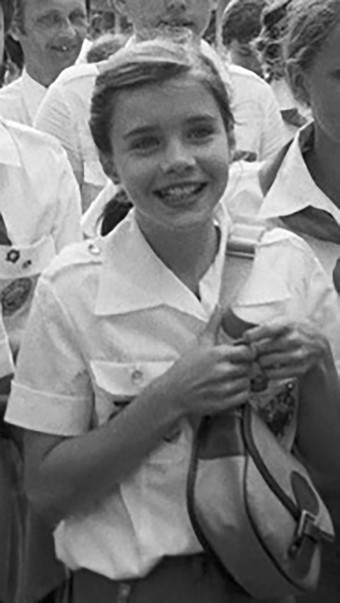 Like millions of American children during the Cold War, 10-year-old Samantha Smith of Manchester, Maine, was terrified of getting nuked by the Russians. News reports and TV specials about nuclear bombs, missile defense systems, and “mutually assured destruction” were commonplace, and Smith got more and more frightened about the possibility of war.

My name is Samantha Smith. I am ten years old. Congratulations on your new job. I have been worrying about Russia and the United States getting into a nuclear war. Are you going to vote to have a war or not? If you aren’t please tell me how you are going to help to not have a war. This question you do not have to answer, but I would like to know why you want to conquer the world or at least our country. God made the world for us to live together in peace and not to fight.

For months, there was no response…until her letter was published in Pravda, the Soviet state newspaper, as a plea for international understanding. But that didn’t mean much to Samantha-she’d written the letter to Andropov himself, and she wanted a reply that answered her questions. So, she wrote another letter, this time to the Soviet embassy in Washington, D.C. In March 1983, the embassy telephoned Smith at her home and told her that a letter from Andropov was being fast-tracked to her.

A month later, the letter arrived. Along with alerting Smith, the ambassador, eager to create a positive press moment for the Soviets, had also tipped off the media and given them a copy of the letter. Reporters and photographers swarmed the Smith’s house as the letter was delivered. Here are some excerpts:

I received your letter, which is like many others that have reached me recently from your country and from other countries around the world.

You write that you are anxious about whether there will be a nuclear war between our two countries. And you ask are we doing anything so that war will not break out. Your question is the most important of these that every thinking man can pose. I will reply to you seriously and honestly. Yes, Samantha, we in the Soviet Union are trying to do everything so that there will not be war on Earth. And today we want very much to live in peace, to trade and cooperate with all our neighbors on this earth-with those far away and those near by. And certainly with such a great country as the United States of America.

In America and in our country there are nuclear weapons-terrible weapons that can kill millions of people in an instant. But we do not want them to be ever used. That’s precisely why the Soviet Union solemnly declared throughout the entire world that never-never-will it use nuclear weapons first against any country. In general we propose to discontinue further production of them and to proceed to the abolition of all the stockpiles on Earth. It seems to me that this is a sufficient answer to your second question: “Why do you want to wage war against the whole world or at least the United States?” We want nothing of the kind. We want peace-there is something that we are occupied with: growing wheat, building and inventing, writing books and flying into space. We want peace for ourselves and for all peoples of the planet. For our children and for you, Samantha.

I invite you, if your parents will let you, to come to our country, the best time being this summer. You will find out about our country, meet with your contemporaries, visit an international children’s camp-“Artek”-on the sea. And see for yourself: In the Soviet Union, everyone is for peace and friendship among peoples. Thank you for your letter. I wish you all the best in your young life.

America’s Cold War adversary had just invited 10-year-old Samantha Smith to visit the Soviet Union, something few Americans at the time had done. She accepted.

The U.S. government allowed the Smiths to go, but they didn’t technically sponsor it or approve it. After all, this was a private citizen being hosted as a guest of a rival nation, and it cast the Russians in a good light. However, for the sake of security, the State Department did prep the family in the two and a half months prior to their trip. (Meanwhile, Samantha appeared on numerous TV shows to discuss the upcoming journey, including Nightline and The Tonight Show.)

On July 7, 1983 Samantha and her parents flew to Moscow, beginning a whirlwind tour and media extravaganza. She was shuttled around in a limousine and saw the sights in Russia’s two biggest cities, Moscow and Leningrad, and learned about the country’s history, its people, and how Communism worked. But Samantha’s favorite part was the familiar world of summer camp. She stayed for a few days at the Artek Young Pioneers Camp (similar to a Boy Scouts or Girl Scouts retreat), where she swam in the Black Sea and hiked with Russian girls her age (all of whom, for the sake of convenience, spoke English).

Every news and TV outlet in the Soviet Union covered the girl’s comings and goings, and Russians gathered along the streets to see her and cheer her name. At one of many press conferences, Samantha was handed a telephone. She listened and then hung up after hearing the voice on the other end repeat the words, “I kiss you, Samantha, I kiss you!” She had no idea that the person on the phone was cosmonaut Valentina Tereshkova, the first women in space and a national hero. “I thought it was just a kid who was calling,” Samantha later said.

The American girl’s only regret: She never got to meet personally with Yuri Andropov. His handlers had told her that he was too busy. In fact, he was too sick-he suffered from renal failure and was dying. They spoke by phone during the trip; Andropov died in early 1984.

Samantha became an unofficial goodwill ambassador, advocating for both the power of international friendship and nuclear disarmament. She published a book called Journey to the Soviet Union, appeared on TV, and gave speeches promoting peace around the world. Invited to the Children’s International Symposium in Japan, she even called for a “granddaughter exchange,” in which Soviet and U.S. leaders should send their granddaughters to live with one another for two weeks every year, mirroring her trip. “The president wouldn’t want to send a bomb to a country his granddaughter was visiting.”

She became so famous that she started to get offers from the entertainment world. In 1984 she hosted and election special for kids on the Disney Channel called Samantha Smith Goes to Washington where she interviewed George McGovern and presidential candidate Jesse Jackson. In 1985 she was cast on Lime Street, an ABC drama starring Robert Wagner as an international insurance fraud investigator; Samantha played his daughter.

In August 1985, just after filming the fifth episode of the series, Samantha and her father were aboard a six-passenger plane flying into Auburn-Lewiston Municipal Airport, near their home in Maine. Bad weather, piloting errors, and incorrect directions from an air traffic control tower caused the plane to crash in a field. There were no survivors. Samantha was 13 years old.

Condolences came from the highest levels of the U.S. and U.S.S.R. governments. Soviet leader Mikhail Gorbachev sent a personal letter to Samantha’s mother, Jane Smith. So did President Ronald Reagan. “Perhaps you can take some measure of comfort in the knowledge that millions of Americans, indeed millions of people, share the burdens of your grief,” he wrote. “They also will cherish and remember Samantha, her smile, her idealism and unaffected sweetness of spirit.”

The Russians memorialized Samantha in a number of different ways: A postage stamp was issued in her honor and a great diamond discovered in Siberia was named after her, as were a new breed of flower, an asteroid discovered by a Russian astronomer (3147 Samantha), and the Young Pioneer Camp she’d visited in 1983.

In the United States, elementary schools in Sammamish, Washington, and Jamaica, New York, were named for her. By decree of the Maine state legislature, the first Monday of June in Maine is Samantha Smith Day. A lifesize bronze statue of Samantha holding a dove, with a bear cub at her feet holding and American flag, now stands at the Maine state library. The bear is a symbol for Russia; the dove is a symbol for peace.

In 1986 Jane Smith started the Samantha Smith Foundation. Its mission was to send American children on friendly exchange trips to Russia. More than 1,000 kids went before Smith laid the organization to rest in 1995. After Gorbachev’s Glasnost freedom reforms in the late 1980s, followed by the collapse of the Soviet Union in 1991, the director of the foundation, Donna Brustad, told a reporter, “I think the work that the foundation was originally formed to do has been done.”