This Day in History: June 2nd- Moses and the River Raid 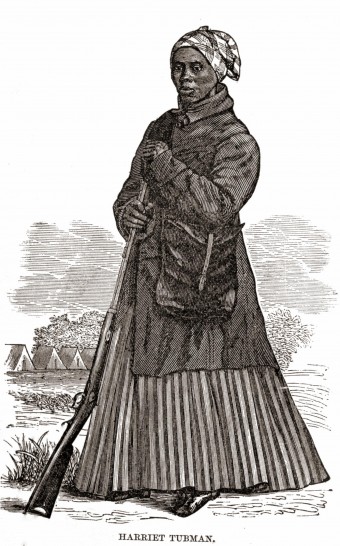 On June 2, 1863, three Union gunboats set sail up the Combahee River from Beaufort, South Carolina. The ships were able to avoid any confrontation with Confederate forces thanks to intelligence provided by a trusted Union spy known as “Moses.”

The master of espionage “Moses” was none other than Harriet Tubman, the hero of the Underground Railroad, who helped hundreds of people escape north to freedom. Although her exploits during the Civil War are less well-known, they are no less extraordinary.

Aside from her skills nursing the injured troops and making herbal medicines, Tubman tirelessly advocated for newly freed slaves. But it was her role in espionage and guerrilla warfare that made her invaluable to the Union Army, and earned her the respect of the government and the press.

Under orders from Edwin Stanton, the Secretary of War, Tubman would garner information from local slaves as well as map the enemy regions. Illiterate, she would have to memorize any intelligence she’d learned. It was through this method of fact-finding that Tubman discovered the location of mines lurking in the Combahee River, among other dangers.

The ships were able to avoid the booby traps and safely stopped along the way to pick up the fugitive slaves.

But they weren’t just on a rescue mission. Under the command of James Montgomery, 150 black soldiers of the 2nd South Carolina decimated several plantations owned by leading secessionists. Many of troops participating in the attack were former slaves who saw the chance to exact a bit of revenge as poetic justice.

By the time the Confederates got hip to what was going on, it was too late – they only managed to capture one run-away slave. All the blame was dumped on a Major Emmanual, who was not alerted to the attack until it was effectively over. Official reports state that the Major and his troops were: “neither watchful nor brave…allowing a parcel of Negro wretches calling themselves soldiers, with a few degraded whites, to march unmolested, with the incendiary torch, to rob, destroy, and burn a large section of the country.”

They gave grudging high praise to their nemesis however: “The enemy seems to have been well posted as to the character and capacity of our troops and their small chance of encountering opposition, and to have been well guided by persons thoroughly acquainted with the river and country.”

The raid was a significant triumph for many reasons. It ended Confederate control of the Combahee River, destroyed large amounts of Confederate property, and gave the Union hundreds more soldiers (from many of the freed slaves volunteering for the army), as well as many thousands of dollars of food and supplies acquired from the enemy- a material and psychological blow to the Confederacy.

For Harriet Tubman’s cause, it went much further. With the Underground Railroad, she was lucky to get a handful of slaves to freedom at one time. On the night of the Combahee River Raid, 750 people gained their freedom. Black soldiers were also given credit for the raid, and for “Robbing the Cradle of Secession.” This helped legitimized the use of black soldiers and crushed the southern myth of the “loyal darkie.”

Tubman would continue to serve the Union in this way during the remainder of the war, being honored in the press for her “patriotism, sagacity, energy, and ability.”  However, after the war, this meant little.  Not only did she not receive her due pension until 1899, but shortly after the war she was forcefully removed from one train car by the conductor and two white passengers (having her arm broken in the process, among other injuries) and put in the smoking car- all the while calls raining down that she should simply be thrown from the moving train for her refusal to leave. Her attempts to support her right to remain in the original train car by telling of her Civil War service fell on deaf ears.