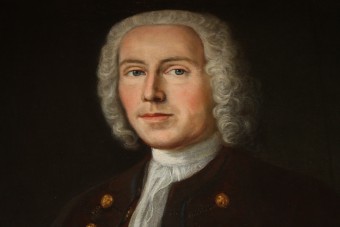 Born on September 9, 1711, Thomas Hutchinson was the fifth generation of his family to live in New England. He was the great-great grandson of the infamous Anne Hutchinson, who had been expelled from the city of Boston for her radical religious views. Aside from his outspoken great-great grandma, his family had done very well in the colonies.

Hutchinson received his education at Harvard, and his exceptional intelligence enabled him to enroll at age 12 and earn a master’s degree by age 19. He entered the political arena in 1737, the year he was chosen to serve in the colonial assembly representing Boston, and as a town selectman.

As the years passed, Hutchinson’s political star continued to rise in Massachusetts. He was the speaker for three terms and sent to England to represent Massachusetts’ interests in a border dispute with New Hampshire. His mission was not successful, but he made many useful allies.

Although he was making friends abroad, Hutchinson was making enemies at home. Samuel Adams and James Otis were not impressed by what they perceived as Hutchinson’s manipulative angling to secure his political positions, holding posts in several branches of government.

By 1764, Hutchinson was one of the most influential men in Massachusetts. He was sent to England once again, this time to protest the proposed sugar taxes. He did oppose the Sugar Act and the Stamp Act – as a man of commerce he believed they would adversely affect trade. But unlike many of his fellow Americans, he firmly felt that Parliament was well within its rights to tax the American colonies.

Because of this, and the fact that his brother-in-law’s job was to distribute the much-hated stamps and nepotism was suspected, Hutchinson’s home was trashed top to bottom, causing $122,000 worth of damage by today’s reckoning. When he showed up to work at court the next morning, he apologized for his appearance, saying he escaped the mob with “no other shirt; no other garment but what I have on; and not one of my family in a better situation.”

Things cooled off for a bit after the repeal of the Stamp Act. Hutchinson still maintained that the colonists could not expect to enjoy all the benefits of being British subjects and expect the protection of the British army against the French and the Indians – and not have to pay taxes and swear fealty to the King. He would never sway from this position during his term as acting governor between 1769 and 1771.

He was appointed Royal Governor in 1773, but his term in office was short-lived. The border debate with New York State was settled in Massachusetts’ favor, a great victory for Hutchinson. But during that year’s opening debate, he set off a spark that would fire a Revolution when he put forth his concepts of Parliamentary supremacy. The assembly felt obliged to respond, challenged by Hutchinson’s words. They countered with what they felt were the appropriate limits on Parliamentary authority.

Meanwhile, Ben Franklin over in England published some of Hutchison’s letters advising the best way to deal with the unruly colonies. This was really bad timing for Governor Hutchinson because he refused to allow the ships to leave Boston Harbor until the tea had been unloaded – and two of his sons had the account to sell the tea. Cue ticked-off Bostonians dressed as Indians dumping tea in the harbor.

Hutchison went back to England ostensibly to hash out a solution to the problem in Massachusetts, but he never saw his home again. He was replaced by Gen. Thomas Gage, commander of the chief British forces in the American colonies. Thomas Hutchinson died of a stroke on June 3, 1780, after watching his colonial home become an independent state.