This Day in History: May 26th- Dracula 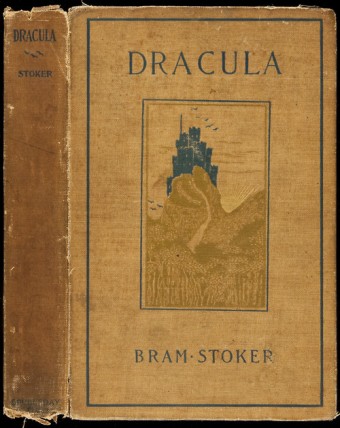 On May 26, 1897, Irish author Bram Stoker’s masterpiece Dracula was released for sale in London. Dracula was not only a sensation in its own right, but inspired a genre of horror that remains immensely popular today. But Bram Stoker certainly wasn’t the creator of vampire lore; the history of the blood-sucking undead spans back into the mists of pre-history.

Stoker based much of his novel on Romanian tales from medieval times, which became the basis for most interpretations of vampire characterizations that still exist today. For this reason, Stoker is lauded as the creator of the modern vampire novel (whether this is a compliment or not we’ll leave up to you).

Stoker’s work has also spawned theatrical productions and countless motion pictures, the most famous being the 1922 silent classic Nosferatu, and the iconic 1931 film Dracula starring the legendary Bela Lugosi.

In the eyes of at least one contemporary reviewer, however, the re-telling of the ancient vampire legends was hopelessly old fashioned and hokey to the eyes of savvy modern readers in the late 19th century. The Manchester Guardian opined:

Man is no longer in dread of the monstrous and the unnatural, and although Mr. Stoker has tackled his gruesome subject with enthusiasm, the effect is more often grotesque than terrible…. The plot is too complicated for reproduction, but it says no little for the author’s power that in spite of its absurdities the reader can follow the story with interest to the end. It is, however, an artistic mistake to fill a whole volume with horrors. A touch of the mysterious, the terrible, or the supernatural is infinitely more effective and credible.

Being able to complete the book without dying of boredom is hardly high praise.

When Stoker was interviewed in June of 1897, he was quick to acknowledge his debt to the old myths, and admit his life-long fascination with the vampire legends. He said, “It is undoubtedly a very fascinating theme, since it touches both on mystery and fact. In the Middle Ages the terror of the vampire depopulated whole villages.”

When asked if there was any factual basis for the vampire legends, Stoker replied,

It rested, I imagine, on some such case as this. A person may have fallen into a death-like trance and been buried before the time. Afterwards the body may have been dug up and found alive, and from this a horror seized upon the people, and in their ignorance they imagined that a vampire was about. The more hysterical, through excess of fear, might themselves fall into trances in the same way; and so the story grew that one vampire might enslave many others and make them like himself. Even in the single villages it was believed that there might be many such creatures. When once the panic seized the population, their only thought was to escape.

It is true that the normal signs of human decomposition, such as blood seeping out the corpse’s mouth and nose, discoloration around the nails and the appearance that the hair and nails have grown, were taken as signs that the deceased was among the ranks of the Undead. One wonders what Stoker would think of angst ridden vampires that sparkle.