“Sleeping Tight” and When the Bed Bugs Started to Bite 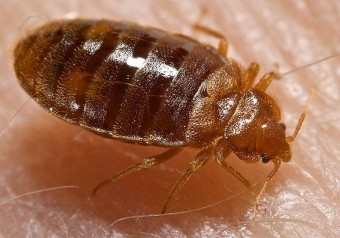 Nothing put more fear into this author as a child more than being told, right before bedtime, “Sleep tight, don’t let the bedbugs bite.” I was a logical kid and I knew that ghosts, boogie men, vampires, and the monster living under my bed were all imaginary. But reminding me that there are very real bugs that may be living in my bed and may bite me while I’m sleeping?! Now, that’s terrifying! So, what is the origin of this phrase and when did bed bugs start biting humans anyway?

Let’s start with the bug of it all: the bed bug, or its scientific name- Cimex lectularius. Most scientists agree the bed bug started its feast on humans around 10,000 years ago. Before this, they are thought to have fed off of other warm-blooded animals who liked living in dark, cool places like caves. But then around 8,000 BC, the bed bugs moved onto their next meal. Humans are (mostly) hairless and make an easy target for a bed bug. Further, according to a theory proposed at New Mexico State University’s College of Agricultural Sciences, the jump likely happened because many humans around this time were sleeping on sheets made of dried grass that were covered in animal skins- an easy hiding spot for the bugs and one which virtually guaranteed a regular food source.

Bed bugs have been biting humans ever since. For instance, archaeologists have found fossilized bed bugs in human dwellings in Egypt dating back about 3,550 years ago. The ancient Greek playwright Aristophanes wrote about them in two of his plays. They are spoken of in the Jewish Talmud. Even Roman philosopher Pliny wrote about bed bugs in his 77 AD work The Natural History, saying that their bites could heal snakebites, ear infections, and other blood ailments (or perceived to be blood ailments) by sucking out the bad blood.

Bed bugs are usually associated with places that are generally kept somewhat less than clean. While this isn’t always the case, it certainly was when people began traveling from one place to next. Most relevant to the “sleep tight” saying, bed bugs thrived in America with the advent of the railroad. The motels and inns near the railroads would be visited by countless travelers, some cleaner than others. As Robert Snetsinger, a professor emeritus of entomology at Penn State University, puts it, these inns were “distribution centers for the spread of bed bugs to homes.”

This brings us to the saying itself. There are a couple of different popular speculative theories out there concerning this, and one much more reasonable one. For starters, one rather interesting theory relates to how some beds were made during the 18th and early 19th centuries. The theory goes that in some cases, beds were supported by ropes tied in a weave, a predecessor to the box-spring. In order for it to support the mattresses, the ropes needed to be pulled tight. If they were loose, the mattress would sag, leaving the bed occupant with an uncomfortable night’s sleep. In fact, one reference even refers to how if a guest had overstayed their welcome, the hosts would loosen the ropes under the mattress as a passive-aggressive way of telling the guests to go on their way.

Another theory is that since people sometimes slept in long john pajamas back then, it was always advised to make sure your nightgown was tied and buttoned tight, to make sure the bed bugs didn’t get in.

The accuracy of either of these notions aside, it turns out there is a slightly more mundane origin for why it’s “sleep tight.” Specifically, as noted by the Oxford English Dictionary, among others, “tight’s” adverb is “tightly,” which, at the time, was just another word for “soundly.” So, essentially, “to sleep tight” just meant “to sleep soundly,” or “to sleep well.”

The first known usage of something like “sleep tight, don’t let the bedbugs bite” dates to 1881, though the word “bed” is left out. In the book Boscobel: The Novel by Emma M. Newton, a nurse tells children “Good night, sleep tight. And don’t let the buggers bite.” In this case, “buggers” could mean other bugs (mosquitoes, spiders, etc.), but the sentiment is the same.

Next, in the 1884 work Boating Trips on the New England River by Henry Parker Fellows, a little girl tells boaters that she hopes they “may sleep tight, where the bugs don’t bite.” This also seems to be a reference to mosquitoes since they are on a river. Finally, in 1897 we find the exact phrase in a usage book called What they Say in New England: A Book of Signs, Sayings, and Superstitions. It explains what a boy in New England would say to a companion as they part for the evening – “Goodnight, sleep tight, don’t let the bedbugs bite.”