This Day in History: May 25- To the Moon 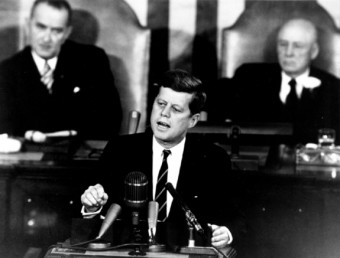 “I believe that this Nation should commit itself to achieving the goal, before this decade is out, of landing a man on the Moon and returning him safely to Earth.” –JFK

On May 25, 1961, President John F. Kennedy delivered a speech before a joint session of Congress that put the United States on a path that led to Americans landing on the Moon. Kennedy’s vision included a comprehensive space program, including weather satellites and a Rover nuclear rocket.

Kennedy’s decision – and its timing – did not occur in a vacuum. The Soviets put the first human being in space, cosmonaut Yuri Gagarin, the previous month on April 12, 1961. Coming at the same time as the Bay of Pigs disaster, these events were a double whammy to the US in the Cold War game of Anything You Can Do I Can Do Better. (American Alan Shepard made it into space on May 5, but he didn’t orbit the earth like Gagarin did.)

The President consulted with NASA Administrator James Webb at great length before going public. He wanted to be certain he was unveiling a program the country had very strong odds of achieving before the Soviets could. They acknowledged an American Moon landing would be a massive technological undertaking, but one that the United States already had a lead over their rivals in. So to the Moon it was.

Kennedy made no secret of the Cold War rivalry behind his decision in his speech to Congress; in fact, he used it as a selling point to the American people. (A common “Greatest Generation / Moon” myth is that during the 1950s and 1960s Americans were all crazy about getting to the Moon.  In fact, according to Smithsonian space historian Roger Launius, during the early days of the Apollo program, the U.S. space program was one of the top government programs Americans listed that they thought should be dropped, with a full 60% of Americans feeling that the U.S. was spending too much money on space flight.)

Nonetheless, the President urged Congress to pony up more money to for the space program, insisting that whatever progress is made by mankind (read Soviets), free men (read Americans) must also equal – or surpass.

From the vantage point of history, it’s impossible not to judge Kennedy’s speech without considering the Cold War perspective.

The first man to walk on the Moon did so on July 20, 1969, less than a decade from the date of President Kennedy’s speech, but almost six years after his assassination.