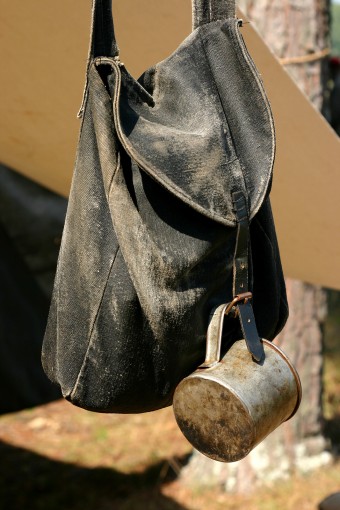 Meaning a complete collection of a set of related things, the curious expression the “whole kit and caboodle” has part of its origin in military life.

In the 1785 version of his A Classical Dictionary of the Vulgar Tongue, Francis Grose gives us the first mention of the word “kit” with this meaning, as well as the phrase “the whole kit”:

The kit is likewise the whole of a soldier’s necessaries, the content of his knapsack, and is used also to express the whole of different commodities; here take the whole kit, i.e. take all.

Kit, itself, is an older word, seen in use as far back as the late 1200s, and it originally meant a round wooden tub. It was derived, perhaps, from the Middle Dutch kitte, which meant alternately a jug, tankard or wooden container.

Caboodle was a more recent invention, first seen around the mid-1800s, although most authorities believe it was derived from the earlier word boodle, which entered the language around 1830. Boodle has several denotations including “phony money,” “graft money,” and “bribe money” as well as “a large amount especially of money;” it also means a collection of people, as one early usage, found in The Journal of American Folklore (1829), demonstrates: “He . . . turnd out the hol boodle of um.”

Another early reference can be found in the 1833  Down Easters where its author, J. Neal, wrote: “I know a feller twould whip the whool boodle of ’em an’ give ’em six.”

Thought to derive either from the English word bundle or the Dutch boedel (meaning property), as with caboodle, boodle originated in America.

The definition of caboodle, when standing alone, is generally limited to meaning a collection of people. Its earliest known usage can be found in the December 16, 1848 edition of the Wisconsin Democrat: “It is no use to be a ‘Son,’ it’s no use to be a whig, it’s no use to be nothin’, – I’ll cut the whole caboodle.”

It also appeared in the Ohio State Journal that same year as, “The whole caboodle will act upon the recommendation of the Ohio Sun.”

When used together with kit, it can denote a collection of things as well, and this meaning dates to the 1860s, where boodle, caboodle and kaboodle were used interchangeably. For example, in 1864, the expression was found in Theodore Winthrop’s John Brent: “Then you’re jess one quarter richer ‘n ef you owned haff, and jess three quarters richer ‘n ef you owned the hull kit and boodle of it.”

By the 1880s, New York’s The Dunkirk Observer-Journal discussed the phrase’s origins: “‘The whole kit and boodle of them’ is a New England expression in common use, and the word in this sense means the whole lot.”

Finally, together in the modern spelling, kit and caboodle, was first seen in print in 1884 in New York’s Syracuse Sunday Standard: “More audiences have been disappointed by him and by the whole kit-and-caboodle of his rivals.”

It’s generally thought that version of the expression survived over the others simply because of the rhythmic alliteration.