Why an Elephant’s Nose is Called a “Trunk” 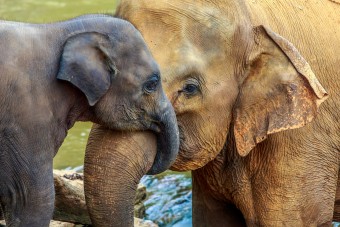 It’s not clear who first tagged the elephant’s snout with the name “trunk,” but it seems to have happened sometime in the late 16th century. The first documented instance appears in the 1589 work by Richard Hakluyt, Principal Navigations: “The Elephant . . . With water fils his troonke right hie and blowes it on the rest.”

As with most etymologies, the precise reason trunk is used to denote an elephant’s proboscis is difficult to distinguish. Arguably the most reasonable theory is that it derives from the fact that just a few decades before “trunk” started getting applied to an elephant’s snout, it was also a word used to describe a pipe or hollow tube, such as a speaking tube or ear-trumpet.  For instance, in the 1546 John Bale work, The Acts of English Voltaries:  “The roode spake these wordes, or else a knaue monke behynde hym in a truncke through the wall”.

Similarly in the 1553 work by Richard Eden, A Treatyse of the Newe India (which was a translation of part of Cosmographia, by Sebastian Muenster), where it describes the tubes used for blow-guns “They… blowe them [arrows] oute of a trunke as we doe pellets of claye.”

This “blow gun / hollow tube” usage particularly fits with the aforementioned first known use of the word to refer to an elephant’s proboscis, “With water fils his troonke right hie and blowes it on the rest.”

This might all have you wondering how the “trunk” of a car got this name. (For the British readers, we’re referring to the boot of a car here.)

For this, we need to go back to the Latin truncus, “main stem or stock of a tree or human body.” This, in turn, gave rise to the Old French “tronc” (“alms box in a church, trunk of a tree, trunk of the human body, wooden block”) around the 12th century and then the English “trunk” around the 15th century.

It is the “main stem of a tree” definition that is important in this one. By the mid-14th century, this gave rise to wood chests or cases being referred to as “trunks,” presumed to be because they were made from wood from tree trunks.

Whatever the case, the first known instance of this definition of the word can be found in a 1462 receipt (Mann. & Househ): “Item, payd ffor a new tronke ffor my lord whych was delyvared to Willyam off Wardrope x. s.”

Fast-forward a little under a half century later and we find an advertisement in the November of 1929 Hearst International Magazine where an automobile is listed as coming standard with “Six wire wheels and a trunk rack”. The rear trunk rack eventually gave way to a built-in storage compartment in the same region of the car that itself was referred to as a “trunk” in North America.

Another interesting one is the use of “trunks” to refer to an article of clothing, such as swimming trunks or “shorts.” This general definition for the word seems to have popped up in the 19th century with the first reference in 1836 in the Pickwick Papers, “The appearance of Mr. Snodgrass in blue satin trunks and cloak, white silk tights and shoes, and Grecian helmet.”

As for specifically “swimming trunks,” we have the first instance appearing in a July of 1883 edition of the Pall Mall Gazette where it states, “Captain Webb attempted his perilous feat of swimming the Niagara Rapids… He wore a pair of silk trunks…”

In this case, it’s generally thought the definition either stems from the “hollow tube” idea, with the trunks having two hollow tubes to stick your legs through (hence “trunks” instead of “trunk”), or is referring to the fact that the shorts contain part of the base of the trunk of the body.